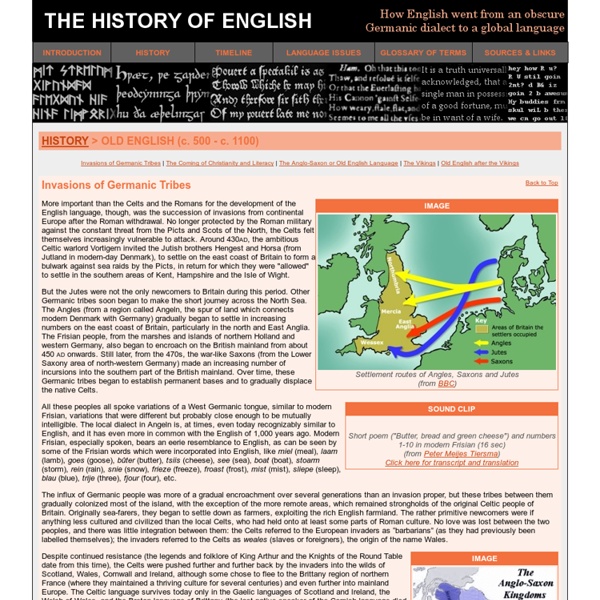 About 400 Anglo-Saxon texts survive from this era, including many beautiful poems, telling tales of wild battles and heroic journeys. The oldest surviving text of Old English literature is “Cædmon's Hymn”, which was composed between 658 and 680, and the longest was the ongoing “Anglo-Saxon Chronicle”. But by far the best known is the long epic poem “Beowulf”. “Beowulf” may have been written any time between the 8th and the early 11th Century by an unknown author or authors, or, most likely, it was written in the 8th Century and then revised in the 10th or 11th Century. It was probably originally written in Northumbria, although the single manuscript that has come down to us (which dates from around 1000) contains a bewildering mix of Northumbrian, West Saxon and Anglian dialects. The 3,182 lines of the work shows that Old English was already a fully developed poetic language by this time, with a particular emphasis on alliteration and percussive effects.

The History of English in 10 Minutes, Annotated By Xah Lee. Date: , This page is a annotated version of: The History of English in Ten Minutes By The Open University. @ Anglo-Saxon literature - English and Related Literature, The University of York Overview The poetry and prose of the Anglo-Saxons stands at the beginnings of English literature. Between the arrival of the Anglo-Saxons in Britain and the Norman Conquest, Anglo-Saxon literature played a key role in the emergence of an English nation and identity and in transforming the world of writing from a Latin one to a vernacular one. Its literature is simultaneously conservative and radically innovative. It preserved form, content and values from an ancient and oral poetic tradition predating the coming of Christianity: Beowulf and other heroic poetry have their origins in a legendary Germanic past. But because of the conversion of the Anglo-Saxons to Christianity, the literature also affords the opportunity to study the transformation of the Germanic world through contact with Rome and its Latin literature.

The 50 most useful Idioms and their Meaning - A list on 1 page Commonly used Idioms Idiom: a manner of speaking that is natural to native speakers of a language Every language has its own collection of wise sayings. They offer advice about how to live and also transfer some underlying ideas, principles and values of a given culture / society. These sayings are called "idioms" - or proverbs if they are longer. Anglo Saxon Kingdoms language Old English English essentially began with the Germanic language of the Anglo-Saxons. The Anglo-Saxon invasion of Britain constituted part of the wider Germanic invasions of the Roman Empire. The Anglo-Saxons, after the departure of the Roman Legions, overwhelmed Roman Britain and drove the Romanized Celts into the remote west. Thus the Anglo-Saxon Germanic tongue became the foundation for the English language.

45 ways to avoid using the word 'very' Three Telling Quotes About ‘Very’ Substitute ‘damn’ every time you’re inclined to write ‘very;’ your editor will delete it and the writing will be just as it should be. ~Mark Twain‘Very’ is the most useless word in the English language and can always come out. More than useless, it is treacherous because it invariably weakens what it is intended to strengthen. ~Florence KingSo avoid using the word ‘very’ because it’s lazy.

Anglo-Saxon literature: Poetry There are two types of Old English poetry: the heroic, the sources of which are pre-Christian Germanic myth, history, and custom; and the Christian. Although nearly all Old English poetry is preserved in only four manuscripts—indicating that what has survived is not necessarily the best or most representative—much of it is of high literary quality. Moreover, Old English heroic poetry is the earliest extant in all of Germanic literature. The characteristics of Anglo-Saxon poetry - BritLitBernie2012 Wiki - Wikia Copied and then edited from those "vypracované otazky verze 2" 600 – 1100 AD (up to 1066) Wiki(en) Germanic tribes invaded England in the 5th century, after the Roman withdrawal, brought with them the Old English, of Anglo-Saxon. By the end of the 7th century invasion ended.

Epic World History: Anglo-Saxon Culture The Anglo-Saxons were Germanic barbarians who invaded Britain and took over large parts of the island in the centuries following the withdrawal of the Roman Empire. They were initially less gentrified than other post-Roman barbarian groups such as the Franks or Ostrogoths because they had less contact with Mediterranean civilization. The Anglo-Saxons were originally pagan in religion. The main group, from northwestern Germany and Denmark, was divided into Angles, Saxons, and Jutes. German tribal affiliations were loose and the original invaders included people from other Germanic groups as well.