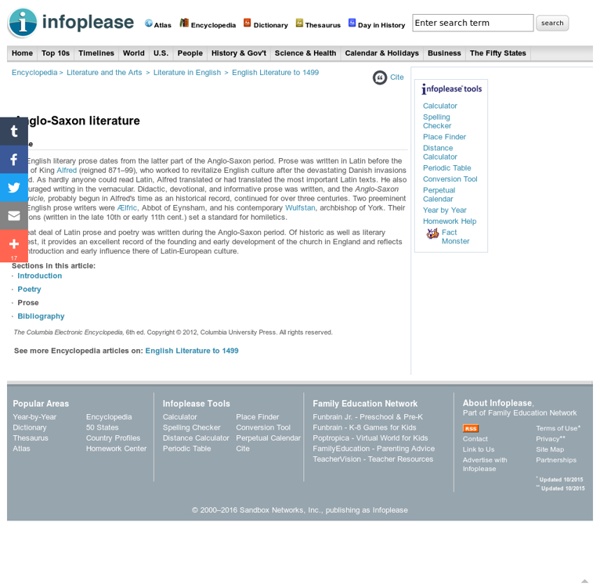 Old English literary prose dates from the latter part of the Anglo-Saxon period. Prose was written in Latin before the reign of King Alfred (reigned 871–99), who worked to revitalize English culture after the devastating Danish invasions ended. As hardly anyone could read Latin, Alfred translated or had translated the most important Latin texts. A great deal of Latin prose and poetry was written during the Anglo-Saxon period. The Columbia Electronic Encyclopedia, 6th ed. See more Encyclopedia articles on: English Literature to 1499

Anglosaxon Literature and Prose - Beaming Notes The Germanic forefathers of the English brought with them their own poetry but there is no evidence of them bringing any prose writings. The development of English prose wholly took place in England and was greatly facilitated by the introduction of Christianity. The early prose was utilitarian and we find its first traces in the collection of Laws such as the Laws of Ine and the opening pages of the chronicle which were kept in various monasteries such as Canterbury, Abingdon, Winchester, Worchester and Peterborough. Alfred has been called the “Father of English prose” and with good reasons. By far, the most important work of King Alfred is the Anglo-Saxon chronicle which was not composed by him but under his influence and orders starter being maintained as a regularly collected history of Britain. Aelfric has been called the greatest English prose writer till the Elizabethan time.

Anglo-Saxon literature: Poetry There are two types of Old English poetry: the heroic, the sources of which are pre-Christian Germanic myth, history, and custom; and the Christian. Although nearly all Old English poetry is preserved in only four manuscripts—indicating that what has survived is not necessarily the best or most representative—much of it is of high literary quality. Moreover, Old English heroic poetry is the earliest extant in all of Germanic literature. Beowulf, a complete epic, is the oldest surviving Germanic epic as well as the longest and most important poem in Old English. The elegiac theme, a strong undercurrent in Beowulf, is central to Deor, The Wanderer, The Seafarer, and other poems. Much of the Old English Christian poetry is marked by the simple belief of a relatively unsophisticated Christianity; the names of two authors are known. Cynewulf, a later poet, signed the poems Elene, Juliana, and The Fates of the Apostles ; no more is known of him. The Columbia Electronic Encyclopedia, 6th ed.

10 Notable Anglo-Saxon Works Besides Beowulf The heroic tale of Beowulf is the most noteworthy work of the Anglo-Saxon era and is often regarded as a major Germanic work but it is good to know about other notable works of the respective era that are important in their own ways. Anglo-Saxon era is marking of the official beginning of English literature; the literature of the respective era is also termed as the Germanic narrative and is reflective of the ancient Anglo-Saxon community. The literature of Germanic period is largely based on religious stories, lives and works of religious figures and tales composed by drawing inspiration from Biblical accounts. The main reason of it is that Bible was the only source of knowledge available, which acts as a muse for the literary figures of the time. Alongside Biblical references, oral tradition was also a significant influence on the Anglo-Saxon writers. Below are 10 of the remarkable Anglo-Saxon works besides Beowulf, which are quite interesting to know, if not equally important. 1. 2.

Discribe the features of Anglo-Saxon Poetry in detail. - Homework Help The poetry of the Anglo-Saxons is defined by the following characteristics: 1. Anglo-Saxon poetry is written in blank verse. The term blank verse means that there is no end rhyme occurring from line to line. 2. Anglo-Saxon poetry typically depicts the problems which arise as the theology of the Church (Christianity) and the theology of the Pagan world are played off of, and against, each other. 3. 4. 5. 6.

The History of English - Old English (c. 500 - c.1100) About 400 Anglo-Saxon texts survive from this era, including many beautiful poems, telling tales of wild battles and heroic journeys. The oldest surviving text of Old English literature is “Cædmon's Hymn”, which was composed between 658 and 680, and the longest was the ongoing “Anglo-Saxon Chronicle”. But by far the best known is the long epic poem “Beowulf”. “Beowulf” may have been written any time between the 8th and the early 11th Century by an unknown author or authors, or, most likely, it was written in the 8th Century and then revised in the 10th or 11th Century. It was probably originally written in Northumbria, although the single manuscript that has come down to us (which dates from around 1000) contains a bewildering mix of Northumbrian, West Saxon and Anglian dialects. Old English was a very complex language, at least in comparison with modern English.

Anglo-Saxon Chronicle The Anglo-Saxon Chronicle is a collection of annals in Old English chronicling the history of the Anglo-Saxons. The original manuscript of the Chronicle was created late in the 9th century, probably in Wessex, during the reign of Alfred the Great. Multiple copies were made of that one original and then distributed to monasteries across England, where they were independently updated. Nine manuscripts survive in whole or in part, though not all are of equal historical value and none of them is the original version. Seven of the nine surviving manuscripts and fragments now reside in the British Library. Composition[edit] All of the surviving manuscripts are copies, so it is not known for certain where or when the first version of the Chronicle was composed. The earliest extant manuscript, the Winchester Chronicle, was written by a single scribe up to the year 891. Surviving manuscripts[edit] A page from the Winchester, or Parker, Chronicle, showing the genealogical preface Importance[edit]