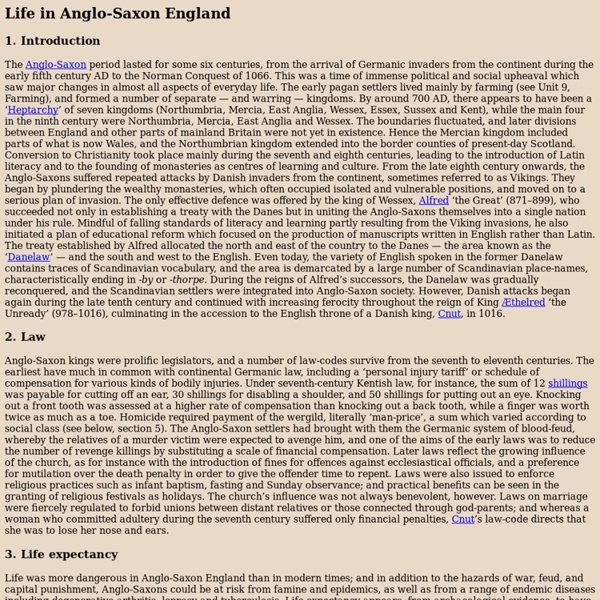 1. Introduction The Anglo-Saxon period lasted for some six centuries, from the arrival of Germanic invaders from the continent during the early fifth century AD to the Norman Conquest of 1066. This was a time of immense political and social upheaval which saw major changes in almost all aspects of everyday life. The early pagan settlers lived mainly by farming (see Unit 9, Farming), and formed a number of separate — and warring — kingdoms. 2. Anglo-Saxon kings were prolific legislators, and a number of law-codes survive from the seventh to eleventh centuries. 3. Life was more dangerous in Anglo-Saxon England than in modern times; and in addition to the hazards of war, feud, and capital punishment, Anglo-Saxons could be at risk from famine and epidemics, as well as from a range of endemic diseases including degenerative arthritis, leprosy and tuberculosis. 4. A substantial literature survives from Anglo-Saxon England in both Latin and Old English. 5. 6. 7. Further Reading Websites

Anglo-Saxon life Life and Religion It is difficult to generalize about an era as lengthy as the Dark Ages, but we'll do it anyway. The Anglo-Saxons were pagans when they came to Britain. They worshipped gods of nature and held springs, wells, rocks, and trees in reverence. Religious observance consisted of invocations and charms to ensure the gods' help in securing a desired outcome in the material world, though the presence of grave goods indicates a belief in an afterlife. Saxons dining A Lord's LifeWe know little about how most people lived, for so little remains. Society was divided into several social classes, which might vary from place to place. Below the king there were two levels of freemen, the upper class thanes and the lower class ceorls (churls). Below the thanes and ceorls were the slaves. Slavery - the way in... ...and the way outSlavery was not necessarily a lifetime sentence, however. WeaponsIn war the common weapon was the spear made with a seven foot long ash shaft and an iron head.

Primary History - Anglo-Saxons - Kings and laws Primary History - Anglo-Saxons - Anglo-Saxons at war Discribe the features of Anglo-Saxon Poetry in detail. | eNotes The poetry of the Anglo-Saxons is defined by the following characteristics: 1. Anglo-Saxon poetry is written in blank verse. The term blank verse means that there is no end rhyme occurring from line to line. 2. 3. 4. 5. 6. Concepts of Authenticity in Early Music and Popular Music Communities | Ethnomusicology Review 22 Christopher Page published his research in a series of articles and books, beginning with “Machaut’s ‘Pupil’ Deschamps on the Performance of Music.” Early Music, 5 (1977), 484–91, and “The Performance of Songs in Late Medieval France: A New Source,” Early Music 10 (1982), 441-450. On Page and Gothic Voices and their reception in Early Music and musicological circles, see Leech-Wilkinson, The Modern Invention of Medieval Music (2002), chapter 2. 23 An interview with Renée Fleming, published in late 2003, was quoted online in January 2004: “I am the voice of Gollum - just before he dies. Appendix: some (mostly British) musicians, listed in order of birth 1920s Joan Sutherland, (b Sydney, 7 Nov 1926; d near Montreux, Switzerland, 10 Oct 2010), soprano Gustav Leonhardt, (b ‘s Graveland, 30 May 1928; d Amsterdam, 16 Jan 2012), harpsichord, organ, conductor Andrea Von Ramm, (b Pärnu, Estonia, 8 Sept 1928; d Munich, 30 Nov 1999), soprano 1930s Bruno Turner, (b London, 7 Feb 1931), choral director

Primary History - Anglo-Saxons - Anglo-Saxon beliefs Primary History - Anglo-Saxons - Anglo-Saxon life Anglo-Saxon clothes - women | Tha Engliscan Gesithas 5th to 7th centuries Women wore an under-dress of linen or wool with long sleeves and a draw-string neck. Sleeves were fastened with clasps for wealthier women, or drawn together with braid or string for poorer women. The outer dress was a tube of material, rather like a pinafore, and often called a ‘peplos’. 7th to 9th centuries Shoulder-brooches and wrist-clasps went out of fashion, and the sleeves of the over-dress now came to just below elbow-length on the arms and calf-length around the legs. 10th to 11th centuries The under-dress was now often pleated or folded, while the sleeves of the over-dress tended to flare towards the wrist. Children seem to have worn very much the same style of clothing as adults, but in smaller sizes. Making clothes was women’s work, and spinning and weaving were among the main activities of women in the Anglo-Saxon period.

Anglo-Saxon clothes - men | Tha Engliscan Gesithas 5th and 6th centuries Men wore wool or linen hip-length undershirts with long sleeves, and probably loin-cloths. Woollen trousers were held up with a belt threaded through loops. A tunic was pulled over the head, and reached down to the knees. 7th to 11th centuries Tunics tended to have extra pleats inserted at the front, and sleeves became fairly tight-fitting between elbow and wrist. There was undoubtedly much variation according to region, period and status. Most clothes were made at home, and would almost certainly have undergone many repairs, or have been handed down, before being eventually cut up for rags or thrown away. Underclothes were not usually dyed, but left in their natural colour, or perhaps sun-bleached.

Anglo Saxon life - Food and Drink The Anglo-Saxons loved eating and drinking and would often have feasts in the Hall. The food was cooked over the fire in the middle of the house; meat was roasted and eaten with bread. They drank ale and mead - a kind of beer made sweet with honey - from great goblets and drinking horns. After the feast a minstrel would play a harp and sing songs of battles and heroes. Anglo-Saxons ate what they grew. They grew cereals - Wheat and rye for bread, barley for brewing and oats for animal food and porridge. Exotic foods such as potatoes, tomatoes, bananas, pineapples - fruits and vegetables of the New World, were unknown to the Anglo-Saxons. Drink Barley was used to make weak beer, which was drunk instead of water. Most Anglo-Saxons were vegetarians because they could not get meat very often. Animals Pigs were important for food because they produce large litters, which would quickly mature and be ready for slaughter. Fish The Anglo-Saxons ate fish which they caught in the rivers and the seas.