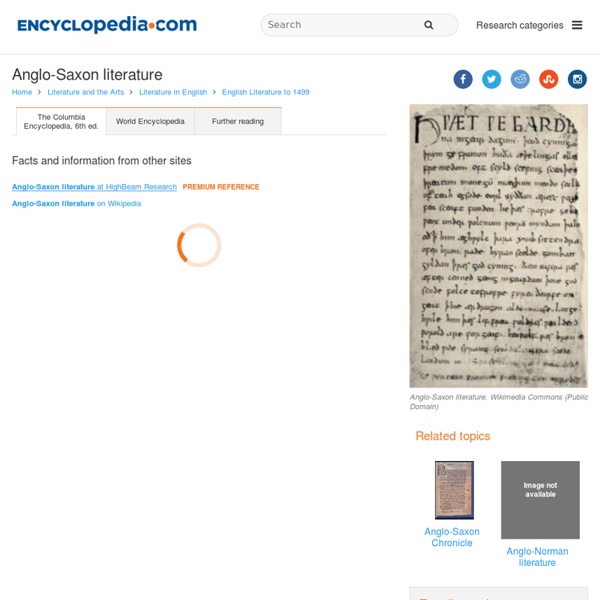 Anglo-Saxon literature, the literary writings in Old English (see English language), composed between c.650 and c.1100. See also English literature. Poetry There are two types of Old English poetry: the heroic, the sources of which are pre-Christian Germanic myth, history, and custom; and the Christian. Although nearly all Old English poetry is preserved in only four manuscripts—indicating that what has survived is not necessarily the best or most representative—much of it is of high literary quality. Moreover, Old English heroic poetry is the earliest extant in all of Germanic literature. Beowulf, a complete epic, is the oldest surviving Germanic epic as well as the longest and most important poem in Old English. The elegiac theme, a strong undercurrent in Beowulf, is central to Deor, The Wanderer, The Seafarer, and other poems. Much of the Old English Christian poetry is marked by the simple belief of a relatively unsophisticated Christianity; the names of two authors are known. Prose

Anglo-Saxon literature - English and Related Literature, The University of York Overview The poetry and prose of the Anglo-Saxons stands at the beginnings of English literature. Between the arrival of the Anglo-Saxons in Britain and the Norman Conquest, Anglo-Saxon literature played a key role in the emergence of an English nation and identity and in transforming the world of writing from a Latin one to a vernacular one. Discribe the features of Anglo-Saxon Poetry in detail. The poetry of the Anglo-Saxons is defined by the following characteristics: 1. Anglo-Saxon poetry is written in blank verse. Anglo-Saxon Culture The Anglo-Saxons were Germanic barbarians who invaded Britain and took over large parts of the island in the centuries following the withdrawal of the Roman Empire. They were initially less gentrified than other post-Roman barbarian groups such as the Franks or Ostrogoths because they had less contact with Mediterranean civilization. The Anglo-Saxons were originally pagan in religion. The main group, from northwestern Germany and Denmark, was divided into Angles, Saxons, and Jutes. German tribal affiliations were loose and the original invaders included people from other Germanic groups as well. Although some of the early Anglo-Saxon invaders had Celtic-influenced names, such as Cedric, the founder of the house of Wessex, the Anglo-Saxons had a pronounced awareness of them-selves as different from the peoples already inhabiting Britain.

Life in Anglo-Saxon England 1. Introduction The Anglo-Saxon period lasted for some six centuries, from the arrival of Germanic invaders from the continent during the early fifth century AD to the Norman Conquest of 1066. This was a time of immense political and social upheaval which saw major changes in almost all aspects of everyday life. Anglo-Saxon Anglo-Saxon, term used historically to describe any member of the Germanic peoples who, from the 5th century ce to the time of the Norman Conquest (1066), inhabited and ruled territories that are today part of England and Wales. According to St. Bede the Venerable, the Anglo-Saxons were the descendants of three different Germanic peoples—the Angles, Saxons, and Jutes. By Bede’s account, those peoples originally migrated from northern Germany to the island of Britain in the 5th century at the invitation of Vortigern, a ruler of Britons, to help defend his kingdom against marauding invasions by the Picts and Scotti, who occupied what is now Scotland.

The characteristics of Anglo-Saxon poetry - BritLitBernie2012 Wiki - Wikia Copied and then edited from those "vypracované otazky verze 2" 600 – 1100 AD (up to 1066) Wiki(en) Germanic tribes invaded England in the 5th century, after the Roman withdrawal, brought with them the Old English, of Anglo-Saxon. By the end of the 7th century invasion ended. They also brought oral poetic tradition. Anglo-Saxon life Life and Religion It is difficult to generalize about an era as lengthy as the Dark Ages, but we'll do it anyway. The Anglo-Saxons were pagans when they came to Britain. They worshipped gods of nature and held springs, wells, rocks, and trees in reverence. Religion was not a source of spiritual revelation, it was a means of ensuring success in material things. For example, you might pray to a particular goddess for a successful harvest, or for victory in battle. A few of the main Anglo-Saxon gods were Tiw, Wodin (Odin), Thor, and Friya, whose names are remembered in our days of the week Tuesday, Wednesday, Thursday, and Friday.

Exploring the Depth and Beauty of Anglo-Saxon Literature This map shows kingdoms in the island of Great Britain at about the year 800 CE. When we hear the words “Anglo-Saxon literature,” Beowulf is probably the first thing that comes to mind. Then we might think of the beauty of illuminated manuscripts such as the Book of Durrow or the Lindisfarne Gospels. In this exclusive interview, James Blake Wiener talks with Professor Larry Swain of Bemidji State University about these works, as well as Norse and Irish influences on Anglo-Saxon literature and the significance of the Byzantines, Theodore and Hadrian, who came to Northumbria in the seventh century CE. Professor Swain recommends learning Old English in order to be able to read works in Old English, of course, but equally intriguing, to allow us to better express ourselves in modern English.

anglo-saxon Early History of England The island was originally inhabited by Celtic tribes from Central Asia prior to the invasion by the Romans c. 50-100CE. Some of the Celts, a brave, fierce, and what we would call barbaric people, fled west over the mountains to what is now Wales and further over to Ireland. The rest stayed and intermarried with the invading Romans. The Romans brought architecture, art, "civilization," Christianity and most important, literacy. Anglo Saxon life - Food and Drink The Anglo-Saxons loved eating and drinking and would often have feasts in the Hall. The food was cooked over the fire in the middle of the house; meat was roasted and eaten with bread. They drank ale and mead - a kind of beer made sweet with honey - from great goblets and drinking horns. After the feast a minstrel would play a harp and sing songs of battles and heroes. Anglo-Saxons ate what they grew.

10 Notable Anglo-Saxon Works Besides Beowulf The heroic tale of Beowulf is the most noteworthy work of the Anglo-Saxon era and is often regarded as a major Germanic work but it is good to know about other notable works of the respective era that are important in their own ways. Anglo-Saxon era is marking of the official beginning of English literature; the literature of the respective era is also termed as the Germanic narrative and is reflective of the ancient Anglo-Saxon community. The literature of Germanic period is largely based on religious stories, lives and works of religious figures and tales composed by drawing inspiration from Biblical accounts. The main reason of it is that Bible was the only source of knowledge available, which acts as a muse for the literary figures of the time. Alongside Biblical references, oral tradition was also a significant influence on the Anglo-Saxon writers. Below are 10 of the remarkable Anglo-Saxon works besides Beowulf, which are quite interesting to know, if not equally important.

Anglosaxon Literature and Prose - Beaming Notes The Germanic forefathers of the English brought with them their own poetry but there is no evidence of them bringing any prose writings. The development of English prose wholly took place in England and was greatly facilitated by the introduction of Christianity. The early prose was utilitarian and we find its first traces in the collection of Laws such as the Laws of Ine and the opening pages of the chronicle which were kept in various monasteries such as Canterbury, Abingdon, Winchester, Worchester and Peterborough. The prose that we find in these earliest writings does not have a proper form.