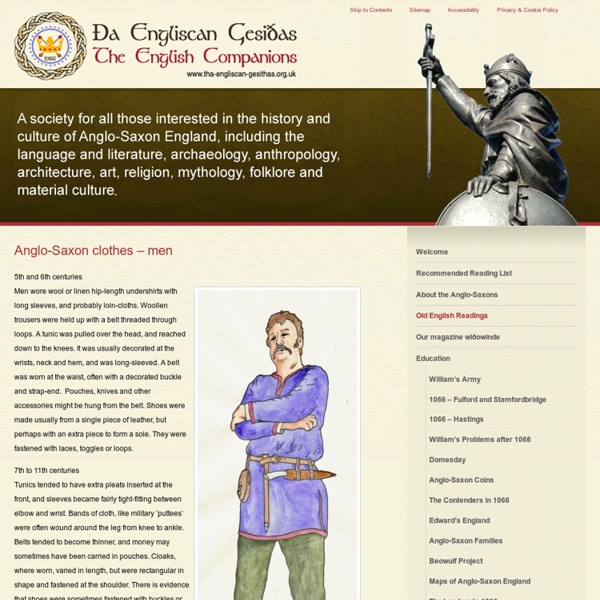 5th and 6th centuries Men wore wool or linen hip-length undershirts with long sleeves, and probably loin-cloths. Woollen trousers were held up with a belt threaded through loops. A tunic was pulled over the head, and reached down to the knees. It was usually decorated at the wrists, neck and hem, and was long-sleeved. 7th to 11th centuries Tunics tended to have extra pleats inserted at the front, and sleeves became fairly tight-fitting between elbow and wrist. There was undoubtedly much variation according to region, period and status. Most clothes were made at home, and would almost certainly have undergone many repairs, or have been handed down, before being eventually cut up for rags or thrown away. Underclothes were not usually dyed, but left in their natural colour, or perhaps sun-bleached.

Anglo-Saxon clothes - women | Tha Engliscan Gesithas 5th to 7th centuries Women wore an under-dress of linen or wool with long sleeves and a draw-string neck. Sleeves were fastened with clasps for wealthier women, or drawn together with braid or string for poorer women. The outer dress was a tube of material, rather like a pinafore, and often called a ‘peplos’. A pair of shoulder-brooches or clasps held this onto the under-dress. 7th to 9th centuries Shoulder-brooches and wrist-clasps went out of fashion, and the sleeves of the over-dress now came to just below elbow-length on the arms and calf-length around the legs. 10th to 11th centuries The under-dress was now often pleated or folded, while the sleeves of the over-dress tended to flare towards the wrist. Children seem to have worn very much the same style of clothing as adults, but in smaller sizes. Making clothes was women’s work, and spinning and weaving were among the main activities of women in the Anglo-Saxon period.

Life in Anglo-Saxon England 1. Introduction The Anglo-Saxon period lasted for some six centuries, from the arrival of Germanic invaders from the continent during the early fifth century AD to the Norman Conquest of 1066. This was a time of immense political and social upheaval which saw major changes in almost all aspects of everyday life. The early pagan settlers lived mainly by farming (see Unit 9, Farming), and formed a number of separate — and warring — kingdoms. By around 700 AD, there appears to have been a ‘Heptarchy’ of seven kingdoms (Northumbria, Mercia, East Anglia, Wessex, Essex, Sussex and Kent), while the main four in the ninth century were Northumbria, Mercia, East Anglia and Wessex. 2. Anglo-Saxon kings were prolific legislators, and a number of law-codes survive from the seventh to eleventh centuries. 3. 4. A substantial literature survives from Anglo-Saxon England in both Latin and Old English. Other original writings in Old English include sermons, saints’ lives and wills. 5. 6. 7. Websites