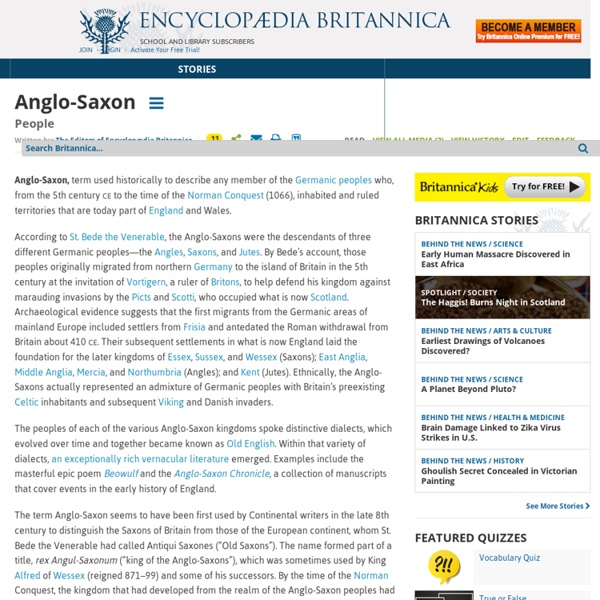 Anglo-Saxon, term used historically to describe any member of the Germanic peoples who, from the 5th century ce to the time of the Norman Conquest (1066), inhabited and ruled territories that are today part of England and Wales. According to St. Bede the Venerable, the Anglo-Saxons were the descendants of three different Germanic peoples—the Angles, Saxons, and Jutes. By Bede’s account, those peoples originally migrated from northern Germany to the island of Britain in the 5th century at the invitation of Vortigern, a ruler of Britons, to help defend his kingdom against marauding invasions by the Picts and Scotti, who occupied what is now Scotland. Archaeological evidence suggests that the first migrants from the Germanic areas of mainland Europe included settlers from Frisia and antedated the Roman withdrawal from Britain about 410 ce. The peoples of each of the various Anglo-Saxon kingdoms spoke distinctive dialects, which evolved over time and together became known as Old English.

Anglo-Saxon Culture The Anglo-Saxons were Germanic barbarians who invaded Britain and took over large parts of the island in the centuries following the withdrawal of the Roman Empire. They were initially less gentrified than other post-Roman barbarian groups such as the Franks or Ostrogoths because they had less contact with Mediterranean civilization. The Anglo-Saxons were originally pagan in religion. The main group, from northwestern Germany and Denmark, was divided into Angles, Saxons, and Jutes. German tribal affiliations were loose and the original invaders included people from other Germanic groups as well. Although some of the early Anglo-Saxon invaders had Celtic-influenced names, such as Cedric, the founder of the house of Wessex, the Anglo-Saxons had a pronounced awareness of them-selves as different from the peoples already inhabiting Britain.

The Anglo-Saxon Influence on Romano-Britain: Research past and present Charlotte Russell University of Durham Abstract: The Romano-British to Anglo-Saxon transition in Britain is one of the most striking transitions seen in the archaeological record. Changes in burial practice between these periods, along with historical, anthropological, environmental and linguistic evidence have all been thought to indicate that a mass migration of Angles and Saxons into Britain occurred in the 5th century A.D. The writings of Gildas and Bede provide a starting point for research in this area, and their migration based viewpoints have long been the basis for research in other areas.

Anglo-Saxons: a brief history Publication date: 13th January 2011 King Arthur as one of the Nine Worthies, detail from the 'Christian Heroes Tapestry' This period is traditionally known as the Dark Ages, mainly because written sources for the early years of Saxon invasion are scarce. Anglo-Saxon England Anglo-Saxon England England before the Germanic migration Back to the Syllabus Anglo-Saxon literature - English and Related Literature, The University of York Overview The poetry and prose of the Anglo-Saxons stands at the beginnings of English literature. Between the arrival of the Anglo-Saxons in Britain and the Norman Conquest, Anglo-Saxon literature played a key role in the emergence of an English nation and identity and in transforming the world of writing from a Latin one to a vernacular one.

Timeline of the Kings & Queens of England By Ben Johnson, Editor There have been 66 monarchs of England and Britain spread over a period of 1500 years. English Kings EGBERT 827 - 839 Egbert (Ecgherht) was the first monarch to establish a stable and extensive rule over all of Anglo-Saxon England. After returning from exile at the court of Charlemagne in 802, he regained his kingdom of Wessex. The Anglo-Saxon Chronicle Online Medieval and Classical Library Release #17 Originally compiled on the orders of King Alfred the Great, approximately A.D. 890, and subsequently maintained and added to by generations of anonymous scribes until the middle of the 12th Century. The original language is Anglo-Saxon (Old English), but later entries are essentially Middle English in tone. Translation by Rev. James Ingram (London, 1823), with additional readings from the translation of Dr.

The Anglo-Saxon kings In the Dark Ages during the fifth and sixth centuries, communities of peoples in Britain inhabited homelands with ill-defined borders. Such communities were organised and led by chieftains or kings. Following the final withdrawal of the Roman legions from the provinces of Britannia in around 408 AD these small kingdoms were left to preserve their own order and to deal with invaders and waves of migrant peoples such as the Picts from beyond Hadrian's Wall, the Scots from Ireland and Germanic tribes from the continent. King Arthur, a larger-than-life figure, has often been cited as a leader of one or more of these kingdoms during this period, although his name now tends to be used as a symbol of British resistance against invasion. The invading communities overwhelmed or adapted existing kingdoms and created new ones - for example, the Angles in Mercia and Northumbria. Ethelberht's law code was the first to be written in any Germanic language and included 90 laws.