Discribe the features of Anglo-Saxon Poetry in detail. - Homework Help 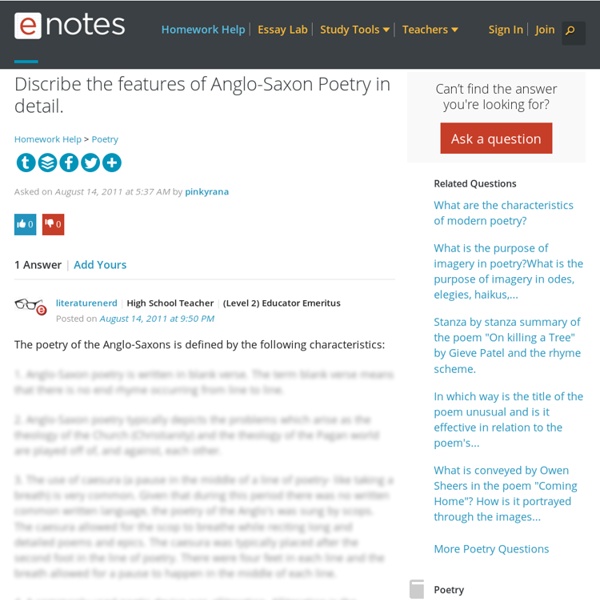 The poetry of the Anglo-Saxons is defined by the following characteristics: 1. Anglo-Saxon poetry is written in blank verse. 2. 3. 4. 5. 6.

Primary History - Anglo-Saxons - Anglo-Saxon life Anglo-Saxon literature: Poetry There are two types of Old English poetry: the heroic, the sources of which are pre-Christian Germanic myth, history, and custom; and the Christian. Although nearly all Old English poetry is preserved in only four manuscripts—indicating that what has survived is not necessarily the best or most representative—much of it is of high literary quality. Moreover, Old English heroic poetry is the earliest extant in all of Germanic literature. It is thus the nearest we can come to the oral pagan literature of Germanic culture, and is also of inestimable value as a source of knowledge about many aspects of Germanic society. Beowulf, a complete epic, is the oldest surviving Germanic epic as well as the longest and most important poem in Old English. The elegiac theme, a strong undercurrent in Beowulf, is central to Deor, The Wanderer, The Seafarer, and other poems. Cynewulf, a later poet, signed the poems Elene, Juliana, and The Fates of the Apostles ; no more is known of him.

Anglo-Saxon literature - English and Related Literature, The University of York Overview The poetry and prose of the Anglo-Saxons stands at the beginnings of English literature. Between the arrival of the Anglo-Saxons in Britain and the Norman Conquest, Anglo-Saxon literature played a key role in the emergence of an English nation and identity and in transforming the world of writing from a Latin one to a vernacular one. Texts to be studied may include Beowulf and other heroic poetry, The Dream of the Rood and other religious writing, historical writing and The Wanderer and other lyric verse. Students will be required to purchase Peter Baker, An Introduction to Old English, 2nd edn, 2007. Aims and Objectives

The Anglo-Saxon Hero by Christopher Garcia In Anglo-Saxon culture and literature, to be a hero was to be a warrior. A hero had to be strong, intelligent, and courageous. Warriors had to be willing to face any odds, and fight to the death for their glory and people. The Anglo-Saxon hero was able to be all of these and still be humble and kind. In Beowulf, the Anglo-Saxon hero is well defined by the actions of Beowulf. Strength and physical appearance are essential to the Anglo-Saxon warrior. I resolved, when I set out on the sea, sat down in the sea-boat with my band of men, that I should altogether fulfill the will of your people or else fall in slaughter, fast in the foe's grasp. When Beowulf speaks these words, he shows his great courage, and displays the proper attitude of the Anglo-Saxon warrior. Beowulf also shows that a hero must be humble. Like Beowulf, Ibn Fadlan shows many honorable characteristics in The 13th Warrior.

Anglo Saxon life - Food and Drink The Anglo-Saxons loved eating and drinking and would often have feasts in the Hall. The food was cooked over the fire in the middle of the house; meat was roasted and eaten with bread. They drank ale and mead - a kind of beer made sweet with honey - from great goblets and drinking horns. After the feast a minstrel would play a harp and sing songs of battles and heroes. Anglo-Saxons ate what they grew. They grew cereals - Wheat and rye for bread, barley for brewing and oats for animal food and porridge. Exotic foods such as potatoes, tomatoes, bananas, pineapples - fruits and vegetables of the New World, were unknown to the Anglo-Saxons. Drink Barley was used to make weak beer, which was drunk instead of water. Most Anglo-Saxons were vegetarians because they could not get meat very often. Animals Pigs were important for food because they produce large litters, which would quickly mature and be ready for slaughter. Fish The Anglo-Saxons ate fish which they caught in the rivers and the seas.

Middle Ages for Kids: Anglo-Saxons of England History >> Middle Ages for Kids Who were the Saxons? The Saxons were a people from north Germany who migrated to the island of Britain around the 5th century. There were actually three main peoples: the Saxons, the Angles, and the Jutes. After these people moved to Britain they became known as the Anglo-Saxons. Eventually the name "Angles" became the "English" and their land became known as England. Anglo-Saxon Kingdoms The Anglo-Saxons were the dominant peoples on the island of Britain from 550 to 1066. The first kingdom to dominate was Northumbria in the early 600s, a kingdom to the north that was settled by the Angles. Dane Invasion In the mid-800s the Danes (people from Denmark) began to invade England. Alfred the Great Prince Alfred became king in 871. King Alfred became known as Alfred the Great. Social Order At the top of the Anglo-Saxon social order were the kings. Laws and Government The Saxon king did not rule alone. The laws of the Saxons were very primitive. Legacy

10 Notable Anglo-Saxon Works Besides Beowulf The heroic tale of Beowulf is the most noteworthy work of the Anglo-Saxon era and is often regarded as a major Germanic work but it is good to know about other notable works of the respective era that are important in their own ways. Anglo-Saxon era is marking of the official beginning of English literature; the literature of the respective era is also termed as the Germanic narrative and is reflective of the ancient Anglo-Saxon community. The literature of Germanic period is largely based on religious stories, lives and works of religious figures and tales composed by drawing inspiration from Biblical accounts. The main reason of it is that Bible was the only source of knowledge available, which acts as a muse for the literary figures of the time. Alongside Biblical references, oral tradition was also a significant influence on the Anglo-Saxon writers. Below are 10 of the remarkable Anglo-Saxon works besides Beowulf, which are quite interesting to know, if not equally important. 1. 2.

Saxon Kings: House of Wessex Æthelwulf (839-58 AD) Æthelwulf was the son of Egbert and a sub-king of Kent. He assumed the throne of Wessex upon his father's death in 839. His reign is characterized by the usual Viking invasions and repulsions common to all English rulers of the time, but the making of war was not his chief claim to fame. He was an only child, but had fathered five sons, by his first wife, Osburga. Æthelwulf was a wise and capable ruler, whose vision made possible the beneficial reign of his youngest son, Alfred the Great. Æthelbald (858-60 AD) While his father, Æthelwulf, was on pilgrimage to Rome in 855, Æthelbald plotted with the Bishop of Sherbourne and the ealdorman of Somerset against him. Æthelwulf died in 858, and full control passed to Æthelbald. Æthelbert (860-66 AD) Very little is known about Æthelbert, who took his rightful place in the line of succession to the throne of Wessex at around 30 years of age. Æthelred (866-71 AD) Alfred, the Great (871-900 AD) Æthelstan (924-40 AD)

Life in Anglo-Saxon England 1. Introduction The Anglo-Saxon period lasted for some six centuries, from the arrival of Germanic invaders from the continent during the early fifth century AD to the Norman Conquest of 1066. This was a time of immense political and social upheaval which saw major changes in almost all aspects of everyday life. 2. Anglo-Saxon kings were prolific legislators, and a number of law-codes survive from the seventh to eleventh centuries. 3. Life was more dangerous in Anglo-Saxon England than in modern times; and in addition to the hazards of war, feud, and capital punishment, Anglo-Saxons could be at risk from famine and epidemics, as well as from a range of endemic diseases including degenerative arthritis, leprosy and tuberculosis. 4. A substantial literature survives from Anglo-Saxon England in both Latin and Old English. Other original writings in Old English include sermons, saints’ lives and wills. 5. The main division in Anglo-Saxon society was between slave and free. 6. 7. Websites

AD's English Literature : Anglo – Saxon Prose Writers: King Alfred, Aelfric, Wulfstan Until the 9th century literary prose did not develop in England. Before this Anglo – Saxon prose started in the form of some laws, and historical records. Basically with Alfred The Great Anglo – Saxon prose marks the true beginning. He is known as the ‘father of English Prose’. He translated the five great works. (A) Gregory’s – ‘Pastoral Care’ :It is a religious works which discusses the essentials of Christianity. (B) Bede’s – ‘Ecclesiastical History of the England’ – It is about the religious development in England , Here Alfred , wished his people , not just clergy but the laity , to know the history of their country. (C) Orosius – ‘History of the World' – It is a study of the world from various aspects, His accounts of geography. (D) Boethius’s – ‘De Consolation Philosophic’ – It is a fine study of the sorrow’s and suffering of human title and the way of their consolation. (E) St. Aelfric was a scholar of the monastic school founded by Aethelwold at Abingdon. To W. Ref: 1. 2.

Alfred the Great: The Most Perfect Man in History? King Alfred of Wessex (r.871-99) is probably the best known of all Anglo-Saxon rulers, even if the first thing to come into many people’s minds in connection with him is something to do with burnt confectionery. The year 1999 saw the 1100th anniversary of his death on October 26th, 899, at the age of about 50. The occasion is being marked with conferences and exhibitions in Winchester, Southampton and London, but the scale of celebrations will be modest compared with those which commemorated his millenary, and culminated in the unveiling by Lord Rosebery of his statue in Winchester. Alfred’s reputation still stands high with historians, though few would now want to follow Edward Freeman in claiming him as ‘the most perfect character in history’ (The History of the Norman Conquest of England, 5 volumes, 1867-79). Alfred is someone who has had greatness thrust upon him. Alfred tried to put these principles into practice, for instance, in the production of his law-code. Anglo-Saxons!

Anglo-Saxon life Life and Religion It is difficult to generalize about an era as lengthy as the Dark Ages, but we'll do it anyway. The Anglo-Saxons were pagans when they came to Britain. They worshipped gods of nature and held springs, wells, rocks, and trees in reverence. Religion was not a source of spiritual revelation, it was a means of ensuring success in material things. For example, you might pray to a particular goddess for a successful harvest, or for victory in battle. A few of the main Anglo-Saxon gods were Tiw, Wodin (Odin), Thor, and Friya, whose names are remembered in our days of the week Tuesday, Wednesday, Thursday, and Friday. Religious observance consisted of invocations and charms to ensure the gods' help in securing a desired outcome in the material world, though the presence of grave goods indicates a belief in an afterlife. Saxons dining A Lord's LifeWe know little about how most people lived, for so little remains. Below the thanes and ceorls were the slaves.