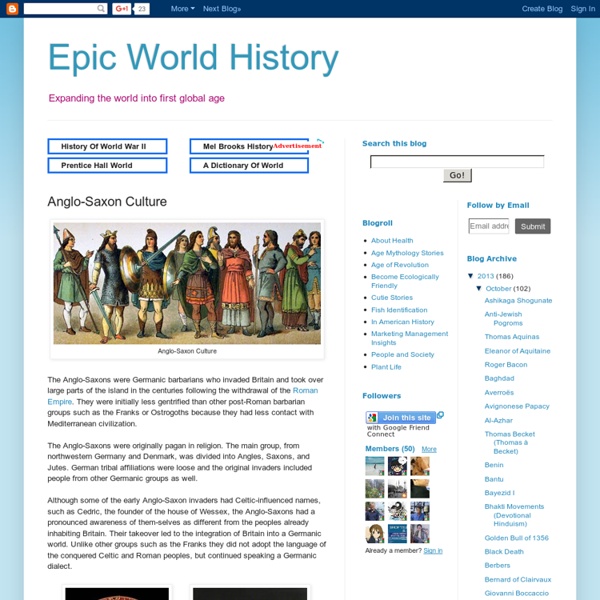 The Anglo-Saxons were Germanic barbarians who invaded Britain and took over large parts of the island in the centuries following the withdrawal of the Roman Empire. They were initially less gentrified than other post-Roman barbarian groups such as the Franks or Ostrogoths because they had less contact with Mediterranean civilization. The Anglo-Saxons were originally pagan in religion. The main group, from northwestern Germany and Denmark, was divided into Angles, Saxons, and Jutes. German tribal affiliations were loose and the original invaders included people from other Germanic groups as well. Although some of the early Anglo-Saxon invaders had Celtic-influenced names, such as Cedric, the founder of the house of Wessex, the Anglo-Saxons had a pronounced awareness of them-selves as different from the peoples already inhabiting Britain. The early Anglo-Saxons highly valued courage and skill in battle, as reflected in the most significant surviving Anglo-Saxon poem, Beowulf.

Anglo-Saxon Anglo-Saxon, term used historically to describe any member of the Germanic peoples who, from the 5th century ce to the time of the Norman Conquest (1066), inhabited and ruled territories that are today part of England and Wales. According to St. Bede the Venerable, the Anglo-Saxons were the descendants of three different Germanic peoples—the Angles, Saxons, and Jutes. By Bede’s account, those peoples originally migrated from northern Germany to the island of Britain in the 5th century at the invitation of Vortigern, a ruler of Britons, to help defend his kingdom against marauding invasions by the Picts and Scotti, who occupied what is now Scotland.

Anglo Saxon Religion - Saxon Gods Days of the week The Anglo-Saxons were pagans when they came to Britain, but, as time passed, they gradually converted to Christianity. Anglo-Saxons: a brief history Publication date: 13th January 2011 King Arthur as one of the Nine Worthies, detail from the 'Christian Heroes Tapestry' This period is traditionally known as the Dark Ages, mainly because written sources for the early years of Saxon invasion are scarce.

Anglo-Saxon literature - English and Related Literature, The University of York Overview The poetry and prose of the Anglo-Saxons stands at the beginnings of English literature. Between the arrival of the Anglo-Saxons in Britain and the Norman Conquest, Anglo-Saxon literature played a key role in the emergence of an English nation and identity and in transforming the world of writing from a Latin one to a vernacular one. Timeline of the Kings & Queens of England By Ben Johnson, Editor There have been 66 monarchs of England and Britain spread over a period of 1500 years. English Kings EGBERT 827 - 839 Egbert (Ecgherht) was the first monarch to establish a stable and extensive rule over all of Anglo-Saxon England. After returning from exile at the court of Charlemagne in 802, he regained his kingdom of Wessex.

Anglo-Saxon Literature Anglo-Saxon Literature Lyric Poetry Genre A classification or category of a literary form Dramatic poem Involves more than one speaker Narrative poem Tells a complete story Lyric poem Expresses the observations and feelings of a single speaker Presents an experience or single effect (does not tell a full story) (orig.) A song accompanied by a lyre Poetry Terminology: Genres Speaker Who is the voice of the poem—the character who tells the poem? Saxon Kings: House of Wessex Æthelwulf (839-58 AD) Æthelwulf was the son of Egbert and a sub-king of Kent. He assumed the throne of Wessex upon his father's death in 839. His reign is characterized by the usual Viking invasions and repulsions common to all English rulers of the time, but the making of war was not his chief claim to fame.

Anglo-Saxon literature: Poetry There are two types of Old English poetry: the heroic, the sources of which are pre-Christian Germanic myth, history, and custom; and the Christian. Although nearly all Old English poetry is preserved in only four manuscripts—indicating that what has survived is not necessarily the best or most representative—much of it is of high literary quality. Moreover, Old English heroic poetry is the earliest extant in all of Germanic literature. It is thus the nearest we can come to the oral pagan literature of Germanic culture, and is also of inestimable value as a source of knowledge about many aspects of Germanic society.