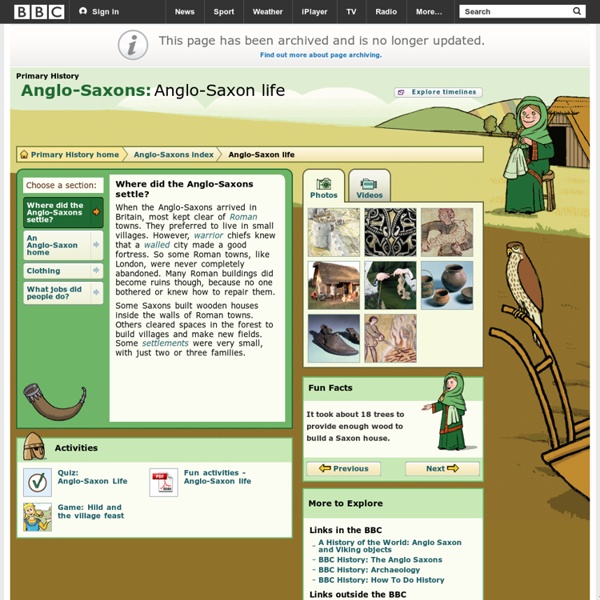 Anglo Saxon life - Food and Drink The Anglo-Saxons loved eating and drinking and would often have feasts in the Hall. The food was cooked over the fire in the middle of the house; meat was roasted and eaten with bread. They drank ale and mead - a kind of beer made sweet with honey - from great goblets and drinking horns. After the feast a minstrel would play a harp and sing songs of battles and heroes. Anglo-Saxons ate what they grew. They grew Discribe the features of Anglo-Saxon Poetry in detail. The poetry of the Anglo-Saxons is defined by the following characteristics: 1. Anglo-Saxon poetry is written in blank verse. The term blank verse means that there is no end rhyme occurring from line to line.

Life in Anglo-Saxon England 1. Introduction The Anglo-Saxon period lasted for some six centuries, from the arrival of Germanic invaders from the continent during the early fifth century AD to the Norman Conquest of 1066. This was a time of immense political and social upheaval which saw major changes in almost all aspects of everyday life. The early pagan settlers lived mainly by farming (see Unit 9, Farming), and formed a number of separate — and warring — kingdoms.

Anglo-Saxon life Life and Religion It is difficult to generalize about an era as lengthy as the Dark Ages, but we'll do it anyway. The Anglo-Saxons were pagans when they came to Britain. They worshipped gods of nature and held springs, wells, rocks, and trees in reverence. Anglo-Saxon Anglo-Saxon, term used historically to describe any member of the Germanic peoples who, from the 5th century ce to the time of the Norman Conquest (1066), inhabited and ruled territories that are today part of England and Wales. According to St. Bede the Venerable, the Anglo-Saxons were the descendants of three different Germanic peoples—the Angles, Saxons, and Jutes. By Bede’s account, those peoples originally migrated from northern Germany to the island of Britain in the 5th century at the invitation of Vortigern, a ruler of Britons, to help defend his kingdom against marauding invasions by the Picts and Scotti, who occupied what is now Scotland. Archaeological evidence suggests that the first migrants from the Germanic areas of mainland Europe included settlers from Frisia and antedated the Roman withdrawal from Britain about 410 ce.

Epic World History: Anglo-Saxon Culture The Anglo-Saxons were Germanic barbarians who invaded Britain and took over large parts of the island in the centuries following the withdrawal of the Roman Empire. They were initially less gentrified than other post-Roman barbarian groups such as the Franks or Ostrogoths because they had less contact with Mediterranean civilization. The Anglo-Saxons were originally pagan in religion. The History of English - Old English (c. 500 - c.1100) About 400 Anglo-Saxon texts survive from this era, including many beautiful poems, telling tales of wild battles and heroic journeys. The oldest surviving text of Old English literature is “Cædmon's Hymn”, which was composed between 658 and 680, and the longest was the ongoing “Anglo-Saxon Chronicle”. But by far the best known is the long epic poem “Beowulf”.

Anglo-Saxon literature: Poetry There are two types of Old English poetry: the heroic, the sources of which are pre-Christian Germanic myth, history, and custom; and the Christian. Although nearly all Old English poetry is preserved in only four manuscripts—indicating that what has survived is not necessarily the best or most representative—much of it is of high literary quality. Moreover, Old English heroic poetry is the earliest extant in all of Germanic literature. It is thus the nearest we can come to the oral pagan literature of Germanic culture, and is also of inestimable value as a source of knowledge about many aspects of Germanic society. The 7th-century work known as Widsith is one of the earliest Old English poems, and thus is of particular historic and linguistic interest.