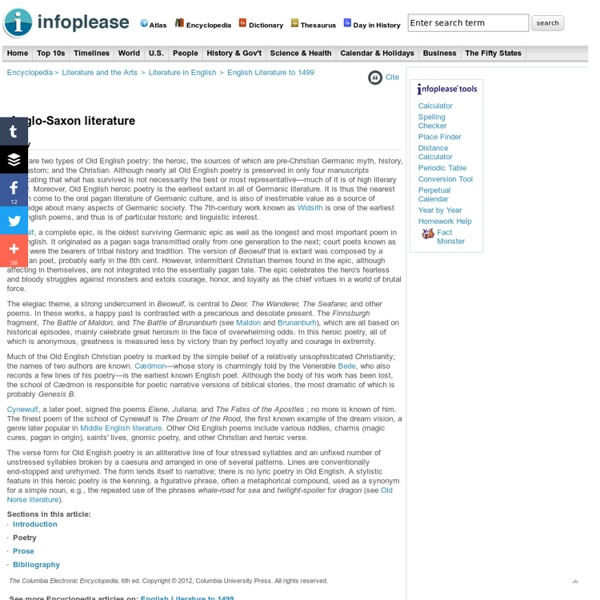 There are two types of Old English poetry: the heroic, the sources of which are pre-Christian Germanic myth, history, and custom; and the Christian. Although nearly all Old English poetry is preserved in only four manuscripts—indicating that what has survived is not necessarily the best or most representative—much of it is of high literary quality. Moreover, Old English heroic poetry is the earliest extant in all of Germanic literature. It is thus the nearest we can come to the oral pagan literature of Germanic culture, and is also of inestimable value as a source of knowledge about many aspects of Germanic society. The 7th-century work known as Widsith is one of the earliest Old English poems, and thus is of particular historic and linguistic interest. Beowulf, a complete epic, is the oldest surviving Germanic epic as well as the longest and most important poem in Old English. The Columbia Electronic Encyclopedia, 6th ed. See more Encyclopedia articles on: English Literature to 1499

Discribe the features of Anglo-Saxon Poetry in detail. - Homework Help The poetry of the Anglo-Saxons is defined by the following characteristics: 1. Anglo-Saxon poetry is written in blank verse. The term blank verse means that there is no end rhyme occurring from line to line. anglo-saxon Early History of England The island was originally inhabited by Celtic tribes from Central Asia prior to the invasion by the Romans c. 50-100CE. Some of the Celts, a brave, fierce, and what we would call barbaric people, fled west over the mountains to what is now Wales and further over to Ireland. The rest stayed and intermarried with the invading Romans. The Romans brought architecture, art, "civilization," Christianity and most important, literacy. They stayed in the land, founding the cities that are today London (then Londinium) and Wincester, but during the fall of the Roman Empire c. 450-500 CE, the Roman soldiers left, leaving the now-softened Celtic people.

Anglo-Saxon Poetry: Characteristics & Examples In this lesson, we will review the general history of Anglo-Saxon society and its era. Then, we will look closer at the characteristics of the literature, specifically the poetry, of that era. Explore our library of over 10,000 lessons Click "next lesson" whenever you finish a lesson and quiz. Got It Anglosaxon Literature and Prose - Beaming Notes The Germanic forefathers of the English brought with them their own poetry but there is no evidence of them bringing any prose writings. The development of English prose wholly took place in England and was greatly facilitated by the introduction of Christianity. The early prose was utilitarian and we find its first traces in the collection of Laws such as the Laws of Ine and the opening pages of the chronicle which were kept in various monasteries such as Canterbury, Abingdon, Winchester, Worchester and Peterborough. The prose that we find in these earliest writings does not have a proper form. Literary prose started developing from the 9th century under King Alfred who attempted to revive learning in his kingdom and it later flourished under prolific Anglo-Saxon writers such as Aelfric and Wulfstan.

The characteristics of Anglo-Saxon poetry - BritLitBernie2012 Wiki - Wikia Copied and then edited from those "vypracované otazky verze 2" 600 – 1100 AD (up to 1066) Wiki(en) The Anglo-Saxon Hero by Christopher Garcia In Anglo-Saxon culture and literature, to be a hero was to be a warrior. A hero had to be strong, intelligent, and courageous. Warriors had to be willing to face any odds, and fight to the death for their glory and people. The Anglo-Saxon hero was able to be all of these and still be humble and kind. In literature Beowulf is, perhaps, the perfect example of an Anglo-Saxon hero. Old English - Anglo Saxon Period The Old English Language also known as Anglo Saxon was the earliest form of English. It was spoken from about 600 A.D. to 1100 A.D. Special studies is needed to read Old English since is completely different from the modern English. Anglo-Saxon literature was in oral form and later in the seventh century, it appeared in the written form. In old English poetry descriptions of sad events and cruel situation are commoner than those of happiness. Poetry

Anglo-Saxon literature - English and Related Literature, The University of York Overview The poetry and prose of the Anglo-Saxons stands at the beginnings of English literature. Between the arrival of the Anglo-Saxons in Britain and the Norman Conquest, Anglo-Saxon literature played a key role in the emergence of an English nation and identity and in transforming the world of writing from a Latin one to a vernacular one. Its literature is simultaneously conservative and radically innovative. Saxon Kings: House of Wessex Æthelwulf (839-58 AD) Æthelwulf was the son of Egbert and a sub-king of Kent. He assumed the throne of Wessex upon his father's death in 839. His reign is characterized by the usual Viking invasions and repulsions common to all English rulers of the time, but the making of war was not his chief claim to fame. Æthelwulf is remembered, however dimly, as a highly religious man who cared about the establishment and preservation of the church.

Kingdoms of the Anglo-Saxons - England House of York AD 1461 - 1470 With the support of his cousin Richard Neville, earl of Warwick (the 'Kingmaker'), Edward IV pressed his claim to the throne through a series of battles between 1460-1461, and managed to secure London while Henry VI and his militaristic queen were campaigning in the north. The House of York owned land predominantly in the south of England, while the rival House of Lancaster owned much of the north, including Lancashire and Yorkshire, making the civil war a north-south conflict. The History of English - Old English (c. 500 - c.1100) About 400 Anglo-Saxon texts survive from this era, including many beautiful poems, telling tales of wild battles and heroic journeys. The oldest surviving text of Old English literature is “Cædmon's Hymn”, which was composed between 658 and 680, and the longest was the ongoing “Anglo-Saxon Chronicle”. But by far the best known is the long epic poem “Beowulf”.

Alfred the Great: The Most Perfect Man in History? King Alfred of Wessex (r.871-99) is probably the best known of all Anglo-Saxon rulers, even if the first thing to come into many people’s minds in connection with him is something to do with burnt confectionery. The year 1999 saw the 1100th anniversary of his death on October 26th, 899, at the age of about 50. The occasion is being marked with conferences and exhibitions in Winchester, Southampton and London, but the scale of celebrations will be modest compared with those which commemorated his millenary, and culminated in the unveiling by Lord Rosebery of his statue in Winchester. Alfred’s reputation still stands high with historians, though few would now want to follow Edward Freeman in claiming him as ‘the most perfect character in history’ (The History of the Norman Conquest of England, 5 volumes, 1867-79). Alfred is someone who has had greatness thrust upon him. How and why did he acquire his glowing reputation, and how does it stand up today?

The Anglo-Saxon kings In the Dark Ages during the fifth and sixth centuries, communities of peoples in Britain inhabited homelands with ill-defined borders. Such communities were organised and led by chieftains or kings. Following the final withdrawal of the Roman legions from the provinces of Britannia in around 408 AD these small kingdoms were left to preserve their own order and to deal with invaders and waves of migrant peoples such as the Picts from beyond Hadrian's Wall, the Scots from Ireland and Germanic tribes from the continent.