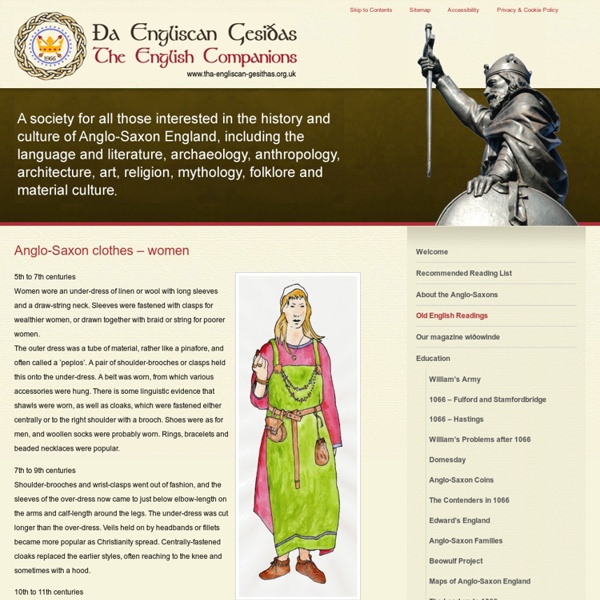 5th to 7th centuries Women wore an under-dress of linen or wool with long sleeves and a draw-string neck. Sleeves were fastened with clasps for wealthier women, or drawn together with braid or string for poorer women. The outer dress was a tube of material, rather like a pinafore, and often called a ‘peplos’. A pair of shoulder-brooches or clasps held this onto the under-dress. 7th to 9th centuries Shoulder-brooches and wrist-clasps went out of fashion, and the sleeves of the over-dress now came to just below elbow-length on the arms and calf-length around the legs. 10th to 11th centuries The under-dress was now often pleated or folded, while the sleeves of the over-dress tended to flare towards the wrist. Children seem to have worn very much the same style of clothing as adults, but in smaller sizes. Making clothes was women’s work, and spinning and weaving were among the main activities of women in the Anglo-Saxon period.

Anglo-Saxon clothes - men | Tha Engliscan Gesithas 5th and 6th centuries Men wore wool or linen hip-length undershirts with long sleeves, and probably loin-cloths. Woollen trousers were held up with a belt threaded through loops. A tunic was pulled over the head, and reached down to the knees. It was usually decorated at the wrists, neck and hem, and was long-sleeved. 7th to 11th centuries Tunics tended to have extra pleats inserted at the front, and sleeves became fairly tight-fitting between elbow and wrist. There was undoubtedly much variation according to region, period and status. Most clothes were made at home, and would almost certainly have undergone many repairs, or have been handed down, before being eventually cut up for rags or thrown away. Underclothes were not usually dyed, but left in their natural colour, or perhaps sun-bleached.

Edurete.org The Anglo –Saxons in battle The Anglo –Saxons in battle: The military strategy of Anglo-Saxon tribes was based on surprise attack, a suitable tactic for semi-nomadic raiders, but their lifestyle changed, however slowly, after they settled down permanently in the recently conquered Britannia. The Anglo-Saxons reigned over a big part of South-Western England from the VI to the XI century and it is reasonable to suppose that their strategies and weaponry changed a bit in four centuries. We can reasonably guess that they should have learnt to fight as defenders of their new domains as well as attackers and raiders. Structure of Anglo Saxon Army: Like the vast majority of western Germanic tribes the core of Anglo Saxon army was infantry and each king led his warriors to the battlefield and had to give proof of his courage. Besides his warriors, kings were followed in battle by other nobles and lords, who were his allies and often his relatives. Anglo-Saxon battle strategies:

Primary History - Anglo-Saxons - Kings and laws Anglo-Saxon Families | Tha Engliscan Gesithas Anglo-Saxon Families The father was the head of the family in Anglo-Saxon England, and the spear propped up by the door symbolised his role as protector. In fact, the father’s side of the family was called the ‘sperehealf’, while the mother’s side was called the ‘spinelhealf’. The spindle summed up her role in the family, and possessions found in men’s and women’s graves confirm this. It may have been that the father was expected to be quite strict, and even a little distant from his children. Old English has many more words for different family relatives than modern English, which shows how important the idea of ‘family’ was for them. You might have ‘stēop-‘ relatives, if your own parents were dead, or ‘fōster-‘ parents, if your real parents had given you away for some reason. There were almost certainly four or five people in the average family – records from the year 1200 suggest 4.68*. People outside the family, but whose name, family and origin were known would count as ‘cýðð’.

Life in Anglo-Saxon England 1. Introduction The Anglo-Saxon period lasted for some six centuries, from the arrival of Germanic invaders from the continent during the early fifth century AD to the Norman Conquest of 1066. This was a time of immense political and social upheaval which saw major changes in almost all aspects of everyday life. The early pagan settlers lived mainly by farming (see Unit 9, Farming), and formed a number of separate — and warring — kingdoms. By around 700 AD, there appears to have been a ‘Heptarchy’ of seven kingdoms (Northumbria, Mercia, East Anglia, Wessex, Essex, Sussex and Kent), while the main four in the ninth century were Northumbria, Mercia, East Anglia and Wessex. 2. Anglo-Saxon kings were prolific legislators, and a number of law-codes survive from the seventh to eleventh centuries. 3. 4. A substantial literature survives from Anglo-Saxon England in both Latin and Old English. Other original writings in Old English include sermons, saints’ lives and wills. 5. 6. 7. Websites

THE RELIGION OF THE ANGLO-SAXONS AND VIKINGS (The Vikings) Introduction It is difficult to say with any precision what the pagan Anglo-Saxons and Vikings believed during this period. This is due to the lack of contemporary written material. Many people are now familiar with the gods and goddesses of Scandinavian mythology. These stories were only written down in the 12th century in Iceland when the worship of gods such as Odin and Thor had virtually died out. Days of the week The most obvious sign of the power of the belief in the pagan gods is the names of the days of the week. A magical landscape To the Anglo-Saxons who came to these shores the gods were living things, and elves and demons walked abroad in the world. The linear earthwork to the east of Leeds is known today as Grim's Ditch, recalling one of the nicknames of Woden. This could easily be the case with Sigurd who appears on several carved stones in Yorkshire. Related topics Early Christianity Anglo-Saxon and Viking stone sculpture Photo Gallery Grime's Dyke

The Social, Political, and Legal Structure of Anglo-Saxon England | coffeeshopthinking The social structure of Anglo-Saxon England has six parts. The king alone is the head of society. Beneath the king are the Æthelings, the princes of the blood who are eligible to rule. The political structure is divided into three parts with a class for townships by themselves. The legal structure consists of the Witan and the local courts. – Amelia Lloyd-Jones Like this: Like Loading...