What to wear? Schools increasingly making that decision. As students head back to school in the next few weeks, they're more likely than ever to arrive dressed in a school-sanctioned uniform, an increasingly popular policy that may not improve schools as advertised. 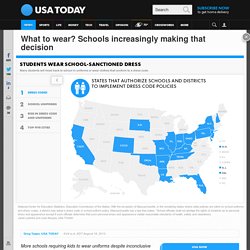 Nearly one in five public schools required uniforms in 2010, up from just one in eight a decade earlier, according to the most recent findings from the U.S. Department of Education. The 60% growth in uniform requirements at school comes despite the fact that research on their effectiveness for safety and school climate is inconclusive. Overall, more than half of public schools enforce some sort of dress code, according to the National Center for Education Statistics. About 57% of schools now have a "strict dress code," researchers found, up from just more than 47% a decade earlier. But Brunsma's review of nearly a decade's worth of research found that uniforms' effects were either unknown, statistically insignificant or, in the case of a few studies, negative. The Influence of a Mandatory School Uniform Policy., 1999-Dec. ERIC Number: ED458695 Record Type: RIE Publication Date: 1999-Dec Pages: 13 Abstractor: N/A Reference Count: N/A The Influence of a Mandatory School Uniform Policy. 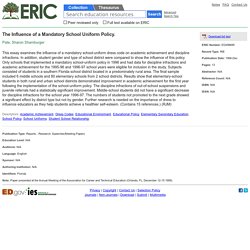 This essay examines the influence of a mandatory school-uniform dress code on academic achievement and discipline infractions. Publication Type: Reports - Research; Speeches/Meeting Papers Education Level: N/A Audience: N/A Language: English. School Dress Codes Are Necessary and Constitutional - Opposing Viewpoints in Context. What are the benefits of school uniforms, as cited in the U.S. 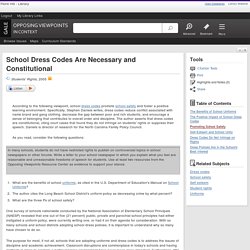 Department of Education's Manual on School Uniforms? The author cites the Long Beach School District's uniform policy as decreasing crime by what percent? What are the three Ps of school safety? One survey of schools nationwide conducted by the National Association of Elementary School Principals (NAESP) revealed that one out of five (21 percent) public, private and parochial school principles had either instigated a uniform policy, were currently writing one, or had it on their agenda for consideration. With so many schools and school districts adopting school dress policies, it is important to understand why so many have chosen to do so.

The purpose for most, if not all, schools that are adopting uniforms and dress codes is to address the issues of discipline and academic achievement. The Benefits of School Uniforms In North Carolina, the feedback from Halifax County is also positive. School Uniforms - ProCon.org. Do Uniforms Make Schools Better? - Defining your ideal school. 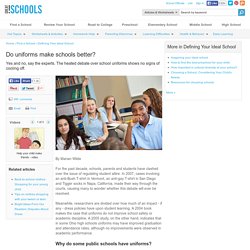 In he long run you save money. all you need is like 3-4 cheap polos and a few pair of appropriate pants. thats it. all the people who say implementing uniforms are unfair to poor people are misunderstood. if you have no dress codes the kids would get made fun of if they wore the same clothes several times a week, but with uniforms, who would ever know? And as long as you dont outgrow them, you can keep them for years. as for "freedom of expression" and all that, you can still find ways to express yourself. does it freedom of exression only apply to what you wear? You can still enjoy th things you like, talk about what you want to talk about, etc.. i think uniforms are the way to go! " "I went to private school from Pre-Kindergarten until my senior year (1989-2003) and wore a uniform from Kindergarten until my last year.

Uniforms and Dress-Code Policies. Does the old adage "clothes make the man" apply to in the school? 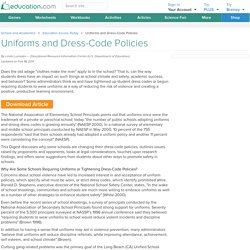 That is, can the way students dress have an impact on such things as school climate and safety, academic success, and behavior? Some administrators think so and have tightened up student dress codes or begun requiring students to wear uniforms as a way of reducing the risk of violence and creating a positive, productive learning environment. The National Association of Elementary School Principals points out that uniforms once were the trademark of a private or parochial school; today "the number of public schools adopting uniforms and strong dress codes is growing annually" (NAESP 2000). In a national survey of elementary and middle school principals conducted by NAESP in May 2000, 10 percent of the 755 respondents "said that their schools already had adopted a uniform policy and another 11 percent were considering the concept" (NAESP).