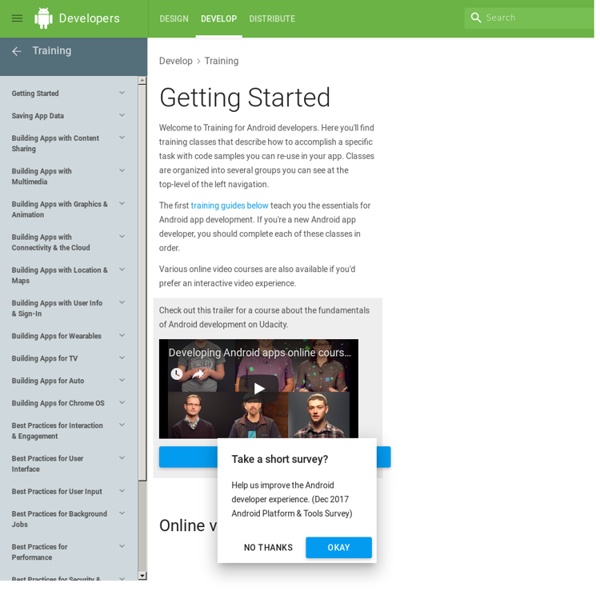 Welcome to Training for Android developers. Here you'll find sets of lessons within classes that describe how to accomplish a specific task with code samples you can re-use in your app. Classes are organized into several groups you can see at the top-level of the left navigation. This first group, Getting Started, teaches you the bare essentials for Android app development. If you're a new Android app developer, you should complete each of these classes in order. If you think you might prefer to learn the basics through interactive video training, check out this trailer for a course in the fundamentals of Android development. Start the video course

Killer Game Programming in Java Killer Game Programming in Java is for people who already know the basics of Java. For example, students who've finished an 'Introduction to Java' course. The aim is to teach reusable techniques which can be pieced together to make lots of different, fun games. For example, how to make a particle system, first-person keyboard controls, a terrain follower, etc. If you don't know Java, then Killer Game Programming in Java isn't for you. Instead, have a look at my Java book suggestions. Android Design Support Library Posted by Ian Lake, Developer Advocate Android 5.0 Lollipop was one of the most significant Android releases ever, in no small part due to the introduction of material design, a new design language that refreshed the entire Android experience. Our detailed spec is a great place to start to adopt material design, but we understand that it can be a challenge for developers, particularly ones concerned with backward compatibility. With a little help from the new Android Design Support Library, we’re bringing a number of important material design components to all developers and to all Android 2.1 or higher devices. You’ll find a navigation drawer view, floating labels for editing text, a floating action button, snackbar, tabs, and a motion and scroll framework to tie them together. Navigation View

Google offers sweet new SDK to let Android devs join 'Lollipop' guild Managing SSL certificates with ease Android 5.0 "Lollipop" won't ship to the public for a couple more weeks, but Google has tossed developers a bone by releasing the final SDK and system images for select Nexus devices ahead of launch. The new Lollipop SDK that posted on Friday replaces the earlier Android L Developer Preview that the Chocolate Factory offered up at its annual Google I/O conference in June. There's a lot in it for developers to explore. Google describes Lollipop as "the largest Android release yet," with more than 5,000 new APIs.

January 2006 One more set of features that we need to learn, and then we get to go play. This is an important lesson -- we have reached the point where you can start doing some interesting stuff. So, just to get it under your fingers, there will be more than one assignment this time. Arrays Meet Android Studio Android Studio is the official Integrated Development Environment (IDE) for Android app development, based on IntelliJ IDEA . On top of IntelliJ's powerful code editor and developer tools, Android Studio offers even more features that enhance your productivity when building Android apps, such as: A flexible Gradle-based build systemA fast and feature-rich emulatorA unified environment where you can develop for all Android devicesInstant Run to push changes to your running app without building a new APKCode templates and GitHub integration to help you build common app features and import sample codeExtensive testing tools and frameworksLint tools to catch performance, usability, version compatibility, and other problemsC++ and NDK supportBuilt-in support for Google Cloud Platform, making it easy to integrate Google Cloud Messaging and App Engine

Perl By Sam Hughes Perl is a dynamic, dynamically-typed, high-level, scripting (interpreted) language most comparable with PHP and Python. Perl's syntax owes a lot to ancient shell scripting tools, and it is famed for its overuse of confusing symbols, the majority of which are impossible to Google for. Perl's shell scripting heritage makes it great for writing glue code: scripts which link together other scripts and programs. Perl is ideally suited for processing text data and producing more text data.

Android Services Android Services - Tutorial Copyright © 2011, 2012, 2013 vogella GmbH Developing own services and using system services in Android 10 places where anyone can learn to code Teens, tweens and kids are often referred to as “digital natives.” Having grown up with the Internet, smartphones and tablets, they’re often extraordinarily adept at interacting with digital technology. But Mitch Resnick, who spoke at TEDxBeaconStreet, is skeptical of this descriptor. Sure, young people can text and chat and play games, he says, “but that doesn’t really make you fluent.” Mitch Resnick: Let's teach kids to code Fluency, Resnick proposes in this TED Talk, comes not through interacting with new technologies, but through creating them. The former is like reading, while the latter is like writing.

New programming slang - Programming A question recently posted on stackoverflow.com asked for people to submit programming terms that they or their team have coined and have come into regular use in their own circles. Below are the most popular answers Yoda Conditions The act of using if (constant == variable) instead of natural if (variable == constant),; for example, if (4 == foo). Because it is like "if it is the blue – this is the sky" or "if that is tall – this is a man." Using the Android action bar (ActionBar) Using the Android action bar (ActionBar) - Tutorial Based on Android 4.4 Copyright © 2009, 2010, 2011, 2012, 2013, 2014 vogella GmbH Using the action bar in Android applications This tutorial describes how to use the action bar in your Android applications.