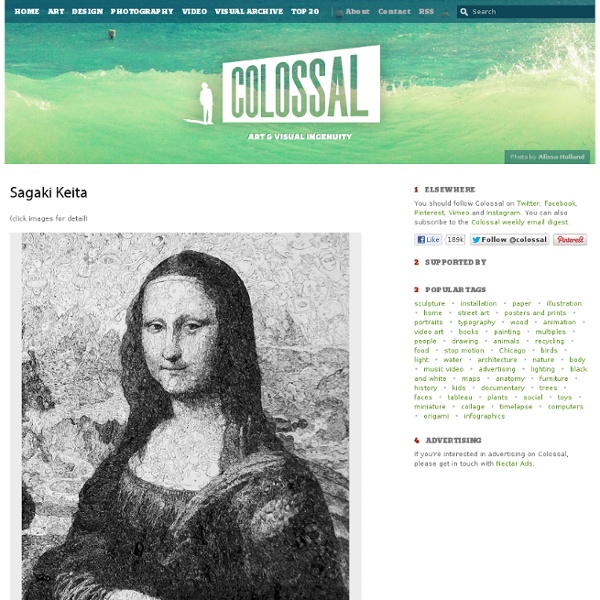 (click images for detail) Artist Sagaki Keita was born in 1984 and lives and works in Tokyo. His densely composited pen and ink illustrations contain thousands of whimsical characters that are drawn almost completely improvised. I am dumbstruck looking at these and love the wacky juxtaposition of fine art and notebook doodles. See more of his work here, and be sure to click the images above for more detail. Thanks Sagaki for sharing your work with Colossal!

Photorealistic Pictures Drawn With a BIC Pen EmailEmail At first sight they may look like some pretty sharp blue photographs, however all those pictures are actually hand drawn with a simple Bic ballpoint pen! Spanish artist Juan Francisco Casas uses up to four 14p ballpoint pens to create his incredibly photorealistic drawings, measuring up to 10ft (3 meters) high. The use of penballs makes Juan’s drawings even more original, which certainly has played a big role in his way to success, and his works are already a sell-out at exhibitions. His source of inspiration comes from his own photographs of nights out with his friends, so you can only imagine how wild his parties are, as half of his drawings include girls that forgot to put on their clothes. Website: juanfranciscocasas.com

Another 38 Amazing Wallpapers Another 38 Amazing Wallpapers Posted on June 12th, 2008 under Desktop Customization After the big success that was my first Wallpaper compilation I’ve decided to make another one. 50 Mind Blowing Sketches Critic, “I’m an artist myself and” Argument from authority – always a logical fallacy, but even worse when it’s in a subjective field where there arguably can’t be any authorities. “I hate it when people who aren’t artists assume anything someone puts out there is ‘mind-blowing’.” – incredibly condescending, don’t you think?

wallpaper The wallpaper of this week is a photo I took in Hong Kong of one of the Space Invaders artwork. The exhibition was titled WIPE OUT and there were several amazing pieces from this legendary French artist. Invader is internationally known for his pixelated mosaic “space invaders” which he has placed in over 60 cities around the world for almost 20 years. In January 2014, the artist launched the third wave of his “invasion” in Hong Kong 13 years after he first hit the city.The works showed a significant evolution, displaying characters from local culture and classic cartoons, but still in the artist’s immediately recognisable pixel aesthetic.

Satirical Art Drawings by Pawel Kuczynski These beautiful works of art are from Polish artist Pawel Kuczynski. Pawel was born in 1976 in Szczecin. He graduated the Fine Arts Academy in Poznan with specialization in graphics. He is famous for his satirical illustrations that make you wonder about society, politics and all the biggies in life. mental_floss Blog & Strange Geographies: the Forgotten High School of... At the turn of the last century, Goldfield was a mining boomtown -- prospectors were pulling millions of dollars worth of ore out of the ground each year, and with a population that ballooned to more than 30,000 by 1904, it was the largest town in the state of Nevada. It was a classic Old West success story: gun-slinging heroes like Wyatt Earp trod its wooden sidewalks, and in a society where the real measure of a town's worth was its bar-and-whorehouse scene, Goldfield had the rest beat: Tex Rickard's Northern Saloon had a bar so long it required 80 bartenders to run it. Of course, I wouldn't be writing about Goldfield if everything had kept going like gangbusters. By 1920s, the gold mines had started to peter out, and in 1923 a moonshine still exploded and started a fire that took most of the town's wooden buildings with it. One of those buildings is Goldfield High School, built during the boom years in 1907.

Anamorphic Drawings: Hidden Images Revealed - StumbleUpon Fresh Visual Daily Anamorphic Drawings: Hidden Images Revealed Thursday 03.10.2011 , Posted by Paul Caridad Share: Tweet468 Share4.8K Book of Kells Images This page contains pointers to images from the Book of Kells and to information about the book. I don't hold any copyright on any of these images; don't ask me if you can use them. If you want to link from your site to this page, feel free. However, if you're thinking about linking directly from your site to one of the image files, please do not. Extremely Bizarre Surreal Artworks In this post, we bring a collection of the most bizarre and conceptually creative surreal artworks. Hope you all will enjoy this post. Feel free to share your feeling about this post with others.