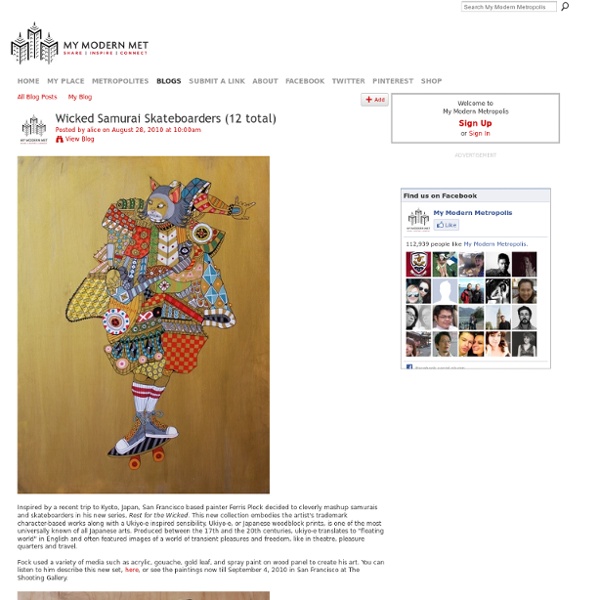 Inspired by a recent trip to Kyoto, Japan, San Francisco based painter Ferris Plock decided to cleverly mashup samurais and skateboarders in his new series, Rest for the Wicked. This new collection embodies the artist's trademark character-based works along with a Ukiyo-e inspired sensibility. Ukiyo-e, or Japanese woodblock prints, is one of the most universally known of all Japanese arts. Produced between the 17th and the 20th centuries, ukiyo-e translates to "floating world" in English and often featured images of a world of transient pleasures and freedom, like in theatre, pleasure quarters and travel. Fock used a variety of media such as acrylic, gouache, gold leaf, and spray paint on wood panel to create his art. The Shooting Gallery

Martin Hoffmann (Germnay) Martin Hoffmann (Germnay) ----------------------<cut>---------------------- Необходимо зарегистрироваться чтобы прочитать текст или скачать файлы Правила дока PsychoWorld Подключаемся к доку Psycho World. Все Ваши предложения, замечания, запросы постим сюда. Дружественные доки:alter-native-visionTHE BEGINNING OF THE END Bridges that GROW themselves out of tropical roots and vines crossing rivers By Daily Mail Reporter Updated: 15:35 GMT, 10 September 2011 Deep in the rainforests of the Indian state of Meghalaya, bridges are not built, they’re grown. Ancient vines and roots of trees stretch horizontally across rivers and streams, creating a solid latticework structure strong enough to be used as a bridge. Ancient solution: The 'double decker' living tree root bridge in the village of Nongriat in Meghalaya, India. Locals have been using the bridges for over 500 years Some of the bridges are over a hundred feet long and can support the weight of fifty or more people. The Cherrapunji region is one of the wettest places in the world with many fast-flowing rivers and streams, making these bridges invaluable to those who live in the region. Nature's incredible engineering: Some of the bridges can hold more than 50 people at a time. Interwoven: A close up of the solid lattice work that makes the bridges so strong. In time, a sturdy living bridge is produced.

Design Studio Following the hugely successful launch of the consulting arm of the site, The Cool Hunter Platinum, the team is excited to announce our newest venture, The Cool Hunter Design, a graphic design studio. For more information contact bill@thecoolhunter.net About the Exhibition The exhibition, organized by The Costume Institute, celebrated the late Alexander McQueen’s extraordinary contributions to fashion. From his Central Saint Martins postgraduate collection of 1992 to his final runway presentation, which took place after his death in February 2010, Mr. McQueen challenged and expanded the understanding of fashion beyond utility to a conceptual expression of culture, politics, and identity. His iconic designs constitute the work of an artist whose medium of expression was fashion. The exhibition featured approximately one hundred ensembles and seventy accessories from Mr. McQueen’s prolific nineteen-year career. The exhibition was organized by Andrew Bolton, curator, with the support of Harold Koda, curator in charge, both of The Costume Institute. The Romantic Mind “You’ve got to know the rules to break them. —Alexander McQueen McQueen doggedly promoted freedom of thought and expression and championed the authority of the imagination. Romantic Nationalism

Rusty Innards No sir, Chrysocyon brachyurus, the Maned Wolf, isn’t any of those..It’s a creature unto itself, the only member of it’s Genus. The maned wolf (pardon the confusing misnomer..as I said before, it’s technically not a wolf) is South America’s largest canid, and one of my favorite canids, due in part to it’s very un-canid-like behaviors. It’s a solitary hunter; it doesn’t form packs, and lives a loner lifestyle, wandering the savannas of South America on it’s stilt-like legs in search of food and, in the off chance it comes across another Maned Wolf, a mate. I’m always drawn to bizarre animals, and these fellows are made all the more bizarre by the fact they are ancient…Maned Wolf fossils have been found that date back to the Pleistocene, which means these guys used to share their habitat with the bear-sized Smilodon populator, the largest saber-toothed cat (and one of the heaviest cats ever, for that matter) ever discovered.

Drawing with a Squirrel: Drawing and Painting A few things I worked on while I was away, mainly in the Pentalic Aqua Journal. Drawing with Faber Castell Sanguine Pitt Artists Pen: Page on the left, Watercolour with coloured pencil. Page on the right, Luna Moth in Watercolour. Daniel Smith Watercolour. A lovely gift from Mia of Kremer Pigmente Watercolours. Daniel Smith Sleeping Beauty Turquoise, Vivianite and Black Tourmaline on Sennelier CP Paper: Picked up some new De Atramentis Inks from Art Brown on this trip too! My God, I’m Delicious !! – 17 Awesome Illustrations by Sir Mitchell My God, I’m Delicious !! – 17 Awesome Illustrations by Sir Mitchell 17 amazing and funny illustrations by Californian illustrator Mike aka Sir Mitchell.

Igor Kieryluk Igor Kieryluk is a professional illustrator and concept artist currently located in Poland. Igor has created fantasy art for clients such as Wizards of the Coast, DC Comics and Fantasy Flight Games. Link: www.igorkieryluk.com Sweet Meat by Jasmin Schuller | Candified Jasmin Schuller is an editorial, fashion and portrait photographer. How to make delicious chocolates and delicious desserts? Take plenty of meat scraps and two liters of blood, a bucket of grease and five kgs of meat, process it expertly, and you have made Sweat Meat. 35 Funny Illustrations by Tiago Hoisel – with Exclusive Interview Today we have the special honor to discuss about digital art and painting with Tiago Hoisel. Besides the great collection of humorous illustrations that he has provided for us, Tiago also gives precious advice and shares interesting information in the below exclusive interview. Amazing creativity, detail and fun are the perfect words to describe his artwork. A: My name is Tiago Hoisel, I’m graduated in graphic design in Universidade do Estado da Bahia. “Chico Bento” Q: Your illustrations are so funny and expressive! A: I always liked humor and realism, so when I started to draw I tried to bring these two thing to my work. “Teenager” Q: What software do you use and which is the feature you couldn’t live without, of that particular software? A: Nowadays 100% of my work is produced in Photoshop CS3, with A Intuos III Tablet. “Meeting with Girlfriend’s Family” Q: We have heard that you are implied in a new project: Techno Image. “Maria!” Q: Which is your favourite thing in the whole wide world?