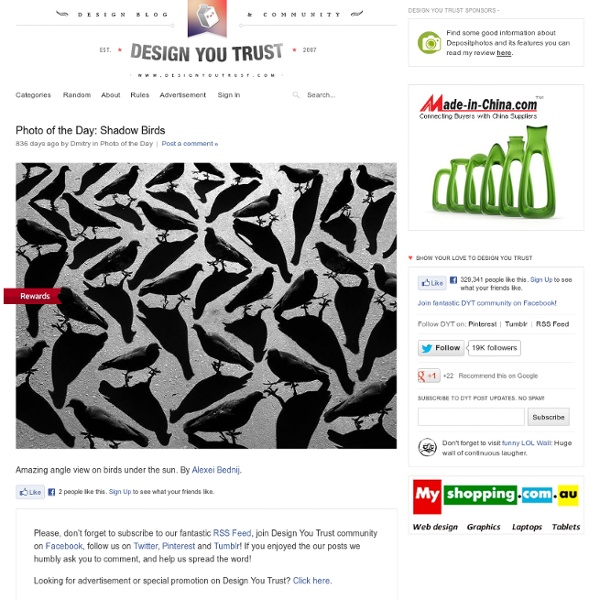 Satiric Artworks by Pawel Kuczynski | Pondly - StumbleUpon Article by James Pond I am the owner of Pondly.com / art lover / electrical engineer / software developer / MBA in e-business student. I blog for pleasure and love to share my Internet findings. Web site: Incredible and creative work by the Polish Artist. Website Do you want more visual fun?

70 Photographs That Will Take Your Breath Away | Digital Photography Shots We here at DPShots believe that the easiest way to learn photography is to learn it by example. Every now and then we come up with some amazing photography examples that take your breath away. This post is no different. From wildlife to magic to a guy sleeping on the back of a buffalo, this post has photographs for all kinds of photographers to take inspiration from. We have collected over 70 majestic photographs that are simply to good to miss. We hope you like this post and endless others that you will get to checkout in future if you are subscribed to our RSS. The Fearless Cat Dael Giraffe says Hi!. Idealists…foolish enough to throw caution to the winds…have advanced mankind and have enriched the world. Kry Back Off! day forty two – trapped [Explored FP] A Lesson in Rockin’ Out Things never happen the same way twice Coffee Splash #2 Slow Motion Thirsty The Wrath Clown And Man Black Swan Dance evening for invalids Lenticular cloud facilite Antelope canyon sunrise Flour Power Fire in the sky infinity Love

20 Most Amazing Microscope Shots Pictures !!!! These microscope pictures are taken from the book ‘ Microcosmos’, created by Brandon Brill . This book includes many scanning electron microscope (SEM) images of insects, human body parts and household items. These are the most amazing images of what is too small to see with the naked eye. 01 – A wood or heathland Ant, Formica fusca, holding a microchip 02 – The surface of an Erasable Programmable Read-Only Memory silicon microchip 03 – Eyelash hairs growing from the surface of human skin 04 – The surface of a strawberry 05 – Bacteria on the surface of a human tongue 06 – Human sperm (spermatozoa), the male sex cells 07 – The nylon hooks and loops of velcro 08 – Household dust which includes long hairs such as cat fur, twisted synthetic and woolen fibers, serrated insect scales, a pollen grain, plant and insect remains 09 -The weave of a nylon stocking 10 – The end of the tongue (proboscis) of a hummingbird hawkmoth 11 – The head of a mosquito 12 – A human head louse clinging to a hair

Sagaki Keita | Colossal - StumbleUpon (click images for detail) Artist Sagaki Keita was born in 1984 and lives and works in Tokyo. His densely composited pen and ink illustrations contain thousands of whimsical characters that are drawn almost completely improvised. I am dumbstruck looking at these and love the wacky juxtaposition of fine art and notebook doodles. See more of his work here, and be sure to click the images above for more detail. Thanks Sagaki for sharing your work with Colossal!

sidewalk chalk guy sidewalk chalk guy «« back to gprime.net all material copyrighted by its original creator | The Longest Photographic Exposures in History - The Latest - itchy i The tremendous popularity of this article with more than half a million (!) clicks in one month inspired me to contact the artist Michael Wesely himself. I felt there were questions by readers which I couldn't answer correctly without talking to Michael. And I also wanted to tell him how much his worked was loved and how many people saw it as an inspiration for their own works and lives. From the many comments I learned, that many of you were astonished by the beauty of the images but also by the technical aspects of their making. But Michael confirmed that he indeed created continuous, uninterrupted exposures over those long periods of time. Michael Wesely, Palast der Republik, Berlin (28.6.2006 - 19.12.2008), © Michael Wesely, Michael wanted to highlight that he also sees those lines as an indicator for something else. His works were truly a hard and long labour of love. It took Michael months and months of experimenting to make sure the negatives weren't going to be over-exposed.

Painting Intoxicated at 100 MPH (10 pieces) - My Modern Metropolis - StumbleUpon It's almost as if Alexandra Pacula paints what she sees while driving drunk at 100 mph. "My work investigates a world of visual intoxication; it captures moments of enchantment, which are associated with urban nightlife," says the New York-based artist born in Poland. "I am fascinated by the ambiance of the city at night and its seductive qualities. The breathtaking turbulence of speeding vehicles and hasty pedestrians evoke feelings of wonder and disorientation. Pacula paints with oil to recreate the feeling of dizziness and confusion. "I suggest motion in order to slow down the scene and capture the fleeting moments, which tend to be forgotten," she says. Alexandra Pacula's websiteMore Amazing Oil Painting Posts:Hyper-Realistic Acrylic Body PaintingFine Art - Rob HefferanMatthew Curry - Modern Abstract ArtBold, Sexy Knife Work - Françoise Nielly: Paris

All That Is Interesting - Rare Photographs From Star Wars A wonderful collection of rare, behind the scenes photographs from Star Wars: A New Hope, The Empire Strikes Back, and Return of the Jedi: Americana 2 | The DuckDuck Collective Blog A year ago, when DuckDuck collective first came together, we posted a blog entitled “Americana”. This was the first time that the three of us had ever combined our imagery together into a single project. “Americana 2″ is a look into some of the more personal images and portraits we have taken over the last year as a team. It has been a beautiful ride and we are so glad so many of you have enjoyed it with us. About DuckDuck: Hello, we’re John, Ally, and Matt — a collective of photographers and filmmakers based out of Lynchburg, VA. Keep in touch!

Wicked Samurai Skateboarders (12 total) - My Modern Metropolis - StumbleUpon Inspired by a recent trip to Kyoto, Japan, San Francisco based painter Ferris Plock decided to cleverly mashup samurais and skateboarders in his new series, Rest for the Wicked. This new collection embodies the artist's trademark character-based works along with a Ukiyo-e inspired sensibility. Ukiyo-e, or Japanese woodblock prints, is one of the most universally known of all Japanese arts. Produced between the 17th and the 20th centuries, ukiyo-e translates to "floating world" in English and often featured images of a world of transient pleasures and freedom, like in theatre, pleasure quarters and travel. Fock used a variety of media such as acrylic, gouache, gold leaf, and spray paint on wood panel to create his art. The Shooting Gallery