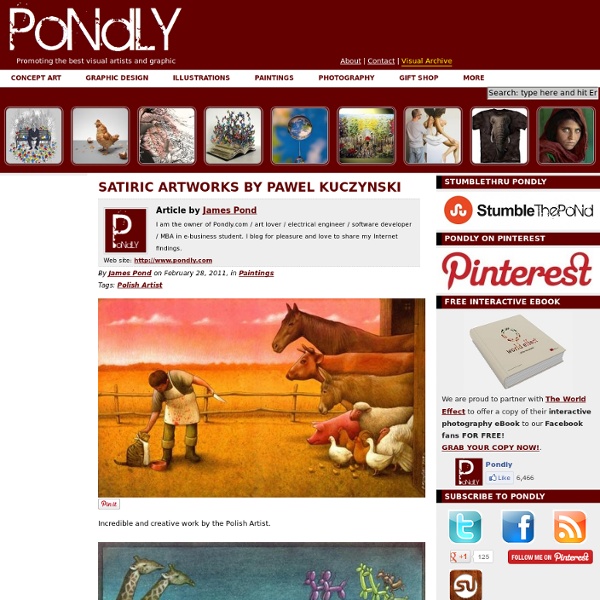 Article by James Pond I am the owner of Pondly.com / art lover / electrical engineer / software developer / MBA in e-business student. I blog for pleasure and love to share my Internet findings. Incredible and creative work by the Polish Artist. Website Do you want more visual fun?

Intricately Patterned Animal Illustrations It would be hard to tell from these strikingly detailed animals but artist Iain Macarthur got his start drawing cartoon characters. Now he carries his sketchbook on the bus, to the cafe and everywhere else as he includes more realism and in this case pattern in his illustrations. See more of his animals (and even some cartoons) at iainmacarthur.carbonmade.com. See Also INCREDIBLE 3D ILLUSTRATIONS JUMP OUT OF THE SKETCHBOOK Via: hypemuch.com Known in some circles as the most amazing man in the universe, he once saved an entire family of muskrats from a sinking, fire engulfed steamboat while recovering from two broken arms relating to a botched no-chute wingsuit landing in North Korea. Promoted Content

Alexandra Mackenzie I could spend months staring at Alexandra Mackenzie’s ultra detailed drawings. Featuring tribal shamans, flesh eating wolfs, and tiny unicorns running around in balls of hair, Alexandra’s drawings have something for everyone. The only thing missing is that there aren’t more drawing on Alexandra’s site. While the drawings are in short supply she does have a great series of collage work that relate to the drawings in a very interesting way.

Ryan Berkley | Animal Illustrations Ryan Berkley is a talented illustrator from Portland, Oregon. A big part of his portfolio are these witty and immaculate animal illustrations. When I first saw Ryan’s illustrations, I could almost imagine the personality of each of the portrayed animals. Via We Find Wildness

Into the surreal Into the surreal Posted by Morrison Conway on November 10, 2011 · 22 Comments Moscow-based artist Philipp Igumnov has created these fun illustrations and collages. Melancholy is not Enough – Surrealistic PhotographySTORYTELLER – Surrealistic Photography of WomenSalvador Dali Paints a Real Wonderland – Dali Paintings Inspired by Alice in WonderlandAre You a Dreamer? Like this: Like Loading... Illustrations by Daniela Uhlig 50 Extremely Awesome Examples of Typography This time we’re gonna show you some truly inspiring works with text, also referred to as typography. This can be used many places; in magazines, advertisements, websites, logos and more. These great pieces will show you that there are no boundaries and that you can make almost anything with text if you have a good portion of creativity and talent. Typography can in todays terms be so much more than what you find in a book or magazine. Gun by ~mou5e Burdened by ~dylanroscover En Masse by ~clockblock your type by ~O-nay I Speak Alone by ~Gordorca Beauty by *mrgraphicsguy Typography Plate 002 by ~Postpwned I am not myself by ~OrigamiSuicida What Lies Within by ~um0p3pisdn Got a Light by ~DesertViper Typography by ~e-emoo John Lennon in Type by ~Dencii Come Back To Me_1600×1050 by ~Dmaghar Lying by =RenzGFX Steven Paul Jobs by ~dylanroscover Instant by *Shinybinary The Raven by ~swordfishll DUB.TILL.DAWN by ~ICDP Lion by ~rickystuffedpie The Garamond Fox by ~StolenStars Think Differently London 2 by *crymz

Minimalist Disney Posters A few days ago a few disney posters got my attention while spending some time on 9GAG. After some research I found the Etsy profile of Rowan Stocks-Moore, a graphic design graduate from Liverpool, England with a passion for book and film covers, as well as a love for design in general! He started his Etsy page this month with these 10 awesome minimalist disney posters… by Rowan Stocks-Moore About the author Hi, my name is Houke de Kwant. 51 Breathtaking Post-Apocalypse Wallpapers Humanity has an obsession with its own destruction. From countless religions, myths, legends and doomsday predictions, humanity has always been curious about what the Earth would be like without us. Based on the Earth’s past, it almost seems inevitable that natural destruction will occur at some point, and man-made methods of destruction exist as well. In this post, we’ll look at 51 breathtaking, post-apocalyptic wallpapers that show artistic representations of what Earth would look like after a cataclysmic event. From memorable scenes like what would be seen in movies like I Am Legend or 28 Days Later, to more dystopian and forboding environments, you’ll be left mesmerized by the incredible detail in these artworks. Hope you like them! (Click for the largest wallpaper size available).

Disturbing illustrations Top Trending Categories Disturbing illustrations January 31, 2012 Art-design These disturbing illustrations are made by Rob Sheridan. art, design Comments 1. 2. 6 Awkward Moments That Will Make You Burst Out From Laughing. 3. 4. 11 Geeky Desk Toys That'll Brighten The Dullest Of Days 5. 6. 7. 36 Examples of Irony Captured in One Picture 8. 9. Want More Articles Like This In Your Inbox? Sign up for our awesome weekly email. Privacy- Contact Friends: Inno.nl - Bless This Stuff - Holy Cool - Womens9 - Fresh Trend Are you an artist? QW@HhsXJ Minimalist Movie Posters Make You Think About Life Sometimes things in life like movies really have the possibility to make you think about things in a new light. Saving Private Ryan did that for me, even though I was in the Air Force, it made me realize the reality of fighting a war against an experienced army. The minimalist approach has the ability to make even the smallest things that you may have not noticed the first time seem like the most important things in the movie. Daniel Keane over at WolfCadet.com has created a ton of cool posters making movies into minimalist pieces. The battle of Thermopylae is one of the turning points in the history of the western world. 300 Spartains led an army of 7,000 men to defend a small pass from an invading Persian army that consisted of anywhere between 100,000 and 500,000 soldiers. (image) Ace Ventura Alllllrighty then! Jurassic Park To think that life itself can be carried around in something as small as a canister of shaving cream makes one think about how delicate we really are. Star Trek