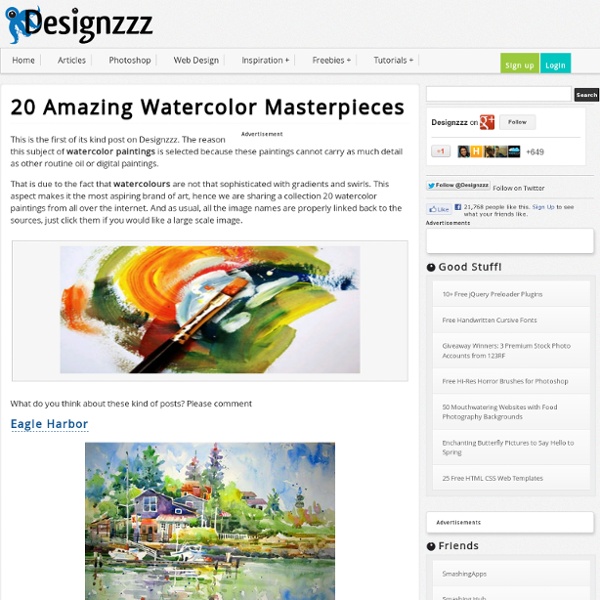 This is the first of its kind post on Designzzz. The reason this subject of watercolor paintings is selected because these paintings cannot carry as much detail as other routine oil or digital paintings. That is due to the fact that watercolours are not that sophisticated with gradients and swirls. This aspect makes it the most aspiring brand of art, hence we are sharing a collection 20 watercolor paintings from all over the internet. And as usual, all the image names are properly linked back to the sources, just click them if you would like a large scale image. What do you think about these kind of posts? Eagle Harbor Mask Butterfly Effect Escape from the Sky Where Time Stands Still At First Glance Watercolor Portrait Signs of a Trawlerman Vanya Forest of Wings Qolsharif Mosque Jesus Oak Creek Sentinel I See You Princess Kaguya Brother Color Me! Hotel Rubi

Ian Francis Interview This England based artist had his first U.S. solo show @BLK/MRKT in 2007 and sold it out. We've been meaning to interview him for awhile. Ian Francis was born in 1979 in Bristol, England, and graduated from the University of the West of England with a degree in Illustration. His work concentrates on the particulars of modern experiences  things like television, world events, celebrities, and day-to-day living. He held his first US solo show at BLK/MRKT in 2007. Describe your process of creating a new piece.

Watercolor Painting Techniques Watercolor can be a tricky medium to master. Here are helpful tips, essential techniques, and step-by-step demonstrations on using watercolors (and watercolor pencils). Art Supplies Shopping List for Watercolor PaintingWhen you first decide to pick up a brush to start watercolor painting, the choice of art supplies available can be overwhelming and confusing. Garden "Garden" - ink, watercolor and gouache on paper - 10" x 10" Artwork © Lawrence Yang 2010 my blog | my site | purchase inquiries

Sculptures Popping Out of Paintings Oh, to have been in Tokyo in June! Shintaro Ohata just finished up a solo exhibition at the Yukari Art Contemprary in Tokyo, Japan. This Hiroshima, Japan-born artist is known for his ability to show us everyday life in a cinematic way. He captures light in his paintings, showering the world, as we know it, with carefully placed strokes of it. "Every ordinary scenery in our daily lives, such as the rising sun, the beauty of a sunset or a glittering road paved with asphalt on a rainy night, becomes something irreplaceable if we think we wouldn’t be able to see them anymore," he told Yukari gallery. How To Make A Digital Painting Of A Rose From Scratch - Photoshop Tutorial Step 1 Open a New Document. Size: 800 X 600 px.Background: White. Picker color: # FFFFFF.Resolution: 72. Step 2 We'll be working with lots of layers.

081810 WIP 081810 WIP - ink, watercolor and gouache on paper Artwork © Lawrence Yang 2010 my blog | my site | purchase inquiries Intricately Patterned Animal Illustrations It would be hard to tell from these strikingly detailed animals but artist Iain Macarthur got his start drawing cartoon characters. Now he carries his sketchbook on the bus, to the cafe and everywhere else as he includes more realism and in this case pattern in his illustrations. See more of his animals (and even some cartoons) at iainmacarthur.carbonmade.com. See Also INCREDIBLE 3D ILLUSTRATIONS JUMP OUT OF THE SKETCHBOOK