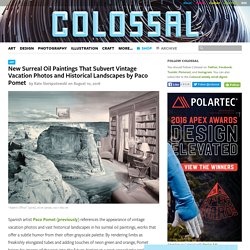 By rendering limbs as freakishly elongated tubes and adding touches of neon green and orange, Pomet brings his images of the past into the future, hinting at a post-apocalyptic realm where humans are forced to live beside the radioactive waste that has lead to their bodies’ defects. Fingerpaint Art by Iris Scott. Log Series by Alison Moritsugu. Hsin-Yao Tseng's paintings of San Francisco. The talent of this guy is amazing! 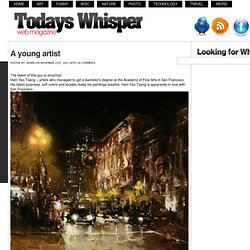 Hsin-Yao Tseng – artists who managed to get a bachelor’s degree at the Academy of Fine Arts in San Francisco. His talent surprises, soft colors and shades make his paintings breathe. Hsin-Yao Tseng is apparently in love with San Francisco. James Flynn - Artists - Callan Contemporary. Unbelievable Seascapes painted by Zaria Forman. The inspiration for Zaria’s drawings began in early childhood when she traveled with her family throughout several of the world’s most remote landscapes, which were the subject of her mother’s fine art photography. 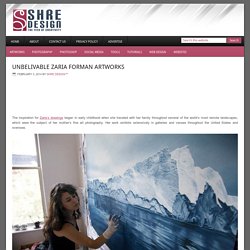 Her work exhibits extensively in galleries and venues throughout the United States and overseas. In addition to exhibitions, recent projects include a series of drawings that served as the set design for the classic ballet Giselle, which premiered in October 2012 at the Grand Theatre of Geneva, Switzerland. Yago Hortal's trippy, colorful paintings. The Paintings of Martin Wittfooth. Black & White Watercolor Illustrations by Elicia Elidanto. The stirring paintings of Samantha Keely Smith. Paintings by Kris Kuksi. The Surreal Paintings of Jean-Pierre Roy. The Cut & Layered Paintings of Bruce Wilhelm. Mind-Bending Paintings by Rob Gonsalves. "Purple Fantasy Forest" Spray Paint by Clay Butler. Brilliant Satirical Artwork by Pawel Kuczynski. May 10, 2012 Pawel Kuczynski is a Polish artist that specializes in satirical illustration. 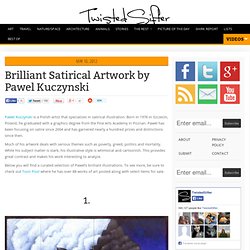 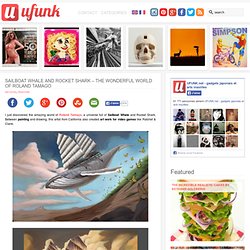 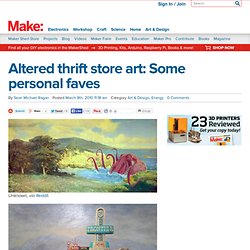 Banksy, via Flickr user goldenticket. It’s a simple idea: Find some bad art, whether original or a print, for a song at a thrift store, then modify it to make, if not “better art,” then at least something that’s more entertaining to look at. The Watercolors of Marion Bolognesi.