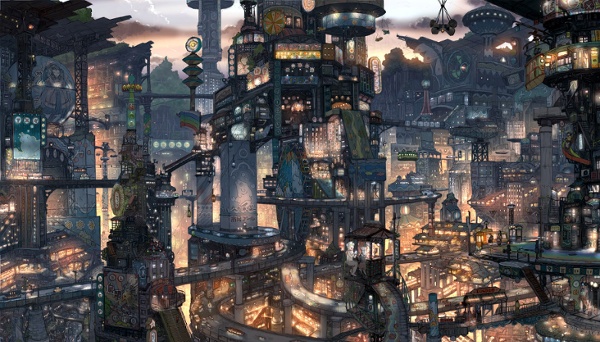 50 Ultra Realistic Female Portrait Drawings Technology brings more and more talented artists to the surface, who create astonishing digitally manipulated images on every possible theme, illustrating everything that you could possibly imagine. But, we still have the “classics”, for whom the pencil and paper are the genuine and compulsory materials in creating works of art. And this is what we are going to present to you today. 50 outstanding portraits of women created by the technique of traditional drawing, without any digital manipulation. Some of them can easily trick the eye into believing that they are real photos of real people, that’s how beautiful and expressive they are. True masterpieces.

Post-apocalyptic Tokyo scenery 19 Aug 2010 The illustrations of TokyoGenso (a.k.a. Tokyo Fantasy) depict a post-apocalyptic Tokyo devoid of people and overtaken by nature. Shinjuku skyline [+] Tokyo Big Sight [+] Intricately Patterned Animal Illustrations It would be hard to tell from these strikingly detailed animals but artist Iain Macarthur got his start drawing cartoon characters. Now he carries his sketchbook on the bus, to the cafe and everywhere else as he includes more realism and in this case pattern in his illustrations. See more of his animals (and even some cartoons) at iainmacarthur.carbonmade.com. See Also INCREDIBLE 3D ILLUSTRATIONS JUMP OUT OF THE SKETCHBOOK

15 Cool and Useful Kitchen Tools Creative gadgets and inventions designed for people who love to cook. Avocado Cuber Useful tool designed for cutting uniform-sized cubes of avocado. 30 Incredible Infinity Pools Incredible Infinity Pool in Bali. Photo credit: Sean McGrath It’s the middle of a blistering hot summer in the United States, so taking a dip in the cool water of an infinity pool sounds heavenly. The design of infinity edge pools are visually stunning, as the swimming pool appears like the edge vanished and the pool stretches into the horizon or to infinity. The design concept of infinity pools originated in France, but the very expensive vanishing edge swimming pools are usually found nowadays in gorgeous locations like exotic resorts or exclusive estates.

Tape, Pencil and Resin: The Art of Brooks Salzwedel I’m very intrigued by Californian artist Brooks Salzwedel’s unique style and approach to these delicate works, that combine nature and rigid human-made structures. It’s nice to see work that brings in different non-digital materials to what we’re used to. Using a combination of Staedler Graphite pencils ranging from 6H to 9B, tape and ‘Awful toxic resin‘, Brooks creates images that look like relics of nature and other objects frozen in time. I also love the gloomy and almost real effect that’s created by having elements between semi-transparent layers. They are also reminiscent of some of the pictures of flattened leaves you’d get in school science books. ‘When working on a piece I ask myself what images I want as the focus or in the foreground then literally draw the images on the layer that coincides with the layer in depth.

20 Amazing Artist-Inspired Tattoos [Editor's note: While your Flavorwire editors take a much-needed holiday break, we're revisiting some of our most popular features of the year. This post was originally published February 16, 2011.] If we’re being honest, most of us will never own a work of art by a famous artist. The Complete Story of Harry Potter Illustrated in 8 Posters by Lucy Knisley The Complete Story of Harry Potter Illustrated in 8 Posters by Lucy Knisley by Laura Hudson July 7, 2011 2:30 PM Share on Facebook Share on Twitter The eighth and final Harry Potter movie, The Deathly Hallows Part 2, hits theaters in a little over a week, and to celebrate this final cinematic chapter in the life of everyone’s favorite adolescent wizard, French Milk creator Lucy Knisley has illustrated an amazing set of eight Harry Potter posters that detail the plot of the entire series. Obviously, there’s a lot packed into these, so if you like the looks of them I recommend heading over to Lucy’s site — where you can download the posters for free at a higher resolution — and checking out the poster that combines all eight illustrations into one massive Harry Potter mega-story!

Cool Colors: 10 Crazy Painted Houses & Home Painting Ideas From camouflage pixel-homes to rainbow-colored houses, a leopard-printed abode to a dalmatian-spotted dwelling, here are some of the most creative, innovative and unusual house-painting colors and ideas you have ever seen. Some of these are professionally painted – others are works of daring do-it-yourself art a conventional house painter would not touch with a ten foot extendable painting pole. (via Oddee) 25 Stunning Black and White Illustrations by Nanami Cowdroy 25 Stunning Black and White Illustrations by Nanami Cowdroy posted under Photography on Apr 20th, 2010 with 5 Comments 20 Apr 1 Share How to Make Leaf Skeletons I wanted to share with you a project from one of my readers who shares with us how to make leaf skeletons. I LOVE this! I have several leafs in various forms displayed in my home and knew I needed to make some of her leaf skeletons to add to my decor. I love how a pattern of leaves can enhance the beauty in your home.

Best in Film: The Greatest Movies of Our Time People magazine featured a story that corresponded with the special in its March 28, 2011 issue, which came out on March 18. The categories for the special were Best Film, Best Sci-Fi Film, Best Musical, Best Action Film, Greatest Film Character, Best Horror Film, Best Chick Flick, Greatest Screen Kiss, Best Comedy, Best Animated Film, Best Suspense/Thriller, Most Romantic Screen Couple, Greatest Line, Best Western Film and Best Political/Historical Film. To vote for their favorite films, movie fans went online at abcnews.com and people.com to select the winners from a list of nominees created by a group of film industry experts. Online voting was open from late November 2010 to January 2011.

25 Mind-Blowing Aerial Photographs Around the World Rano Kau volcano in Rapa Nui National Park, Easter Island, Chile – Photograph by YANN ARTHUS BERTRAND For me, the allure of aerial photography is the unique perspective it gives. The world feels so different when viewed from above.