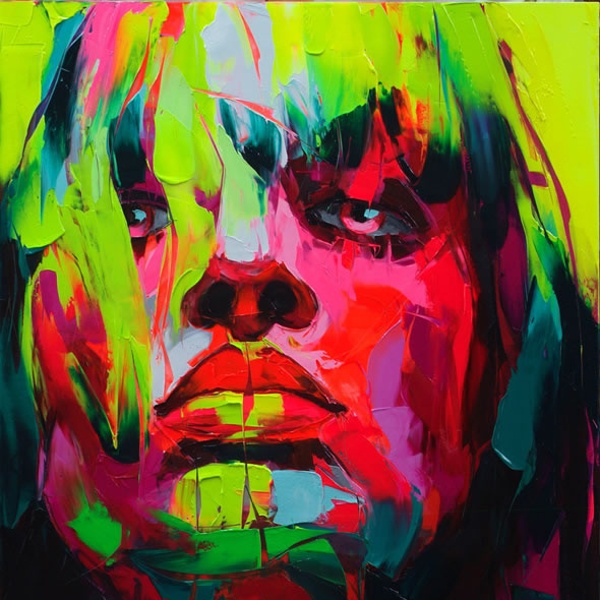 Portrait paintings by Danny O’Connor (aka DOC) “Concentrating mainly on figurative and portrait subject matter, his influences include comic books, graffiti, illustration, and character design. With a strong graphic element visible in his work, O’Connor uses a wide range of media including acrylics, spray paint, ink, paint markers, and household gloss and emulsions. O’Connor has exhibited alongside some of the worlds leading Urban artists such as Banksy and Adam Neate as well as other gallery shows across the UK.” Danny O’Connor: website Via: beautifullife.info

Amazing Graffiti Art by Banksy Banksy is a well-known English graffiti artist, possibly named Robert Banks. His artworks are often satirical pieces of art which encompass topics from politics, culture, and ethics. His street art, which combines graffiti with a distinctive stenciling technique, has appeared in London and in cities around the world. Possibly born in Bristol in 1974, Banksy began as a freehand artist before switching to stenciling around the year 2000; his anti-war, anti-establishment and pro-freedom graffiti images began springing up on city walls in the late 1990′s. Although he has given numerous interviews and even published several books, Banksy’s true identity remains unknown. As written in DailyMail in March ‘08 Banksy pulled off an audacious stunt to produce what is believed to be his biggest work yet in central London.

Creative Design Art Photos and Artworks This awesome Creative Design is masterpiece from Walter Mason from Berlin who creates a delightful pictures of the installation and materials of nature. Harmoniously combining together the leaves and bark of trees, water drops, rocks and so on, it gets paintings and prints in their native environment. His art he calls the Land Art.The author was born in British East Sussex, but the last 10 years is living in Germany. From his childhood dream of becoming an artist in the 16 years he has manifested craving for natural beauty.

ONLINE SUPERHEROES: BATTLE FOR THE INTERNET From the creative mind of Caldwell Tanner, illustrator of College Humor, writer of his own captivating and hilarious illustration blog, and graphic artist/comedian extraordinaire, now comes “The Internet League of Justice” illustration series! Imagine if the most popular online websites and social media networks were superheroes! What powers would they have?