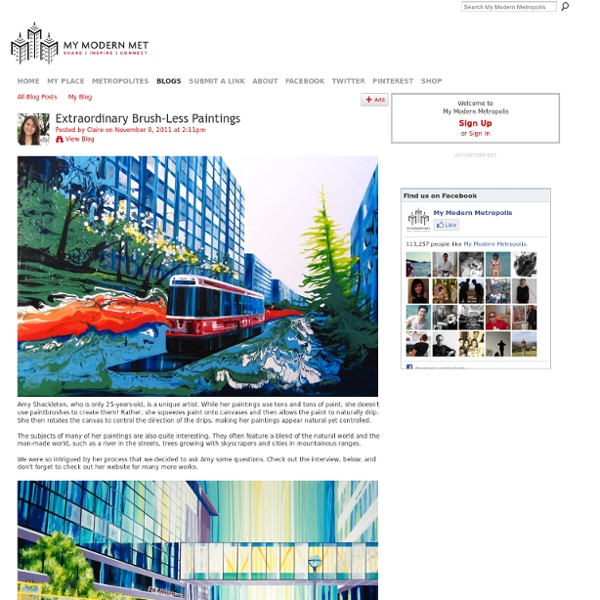 Amy Shackleton, who is only 25-years-old, is a unique artist. While her paintings use tons and tons of paint, she doesn't use paintbrushes to create them! Rather, she squeezes paint onto canvases and then allows the paint to naturally drip. She then rotates the canvas to control the direction of the drips, making her paintings appear natural yet controlled. The subjects of many of her paintings are also quite interesting. They often feature a blend of the natural world and the man-made world, such as a river in the streets, trees growing with skyscrapers and cities in mountainous ranges. We were so intrigued by her process that we decided to ask Amy some questions. When did you first know that you wanted to become a professional artist? As a child, I taught myself the basics by drawing and sketching in my free time. Your process is so unique. I worked on unstretched canvas at first, so the surface was flexible and I could move it whichever way I wanted. How do you stay creative?

Markers and acrylic paint by Minjae Lee - ego-alterego.com - StumbleUpon Minjae Lee is a 20 year old illustrator and painter from Korea. His Favorite mediums are markers and acrylic paint. Minjae Lee: website Via: vectroave.com Painting Intoxicated at 100 MPH (10 pieces) It's almost as if Alexandra Pacula paints what she sees while driving drunk at 100 mph. "My work investigates a world of visual intoxication; it captures moments of enchantment, which are associated with urban nightlife," says the New York-based artist born in Poland. "I am fascinated by the ambiance of the city at night and its seductive qualities. The breathtaking turbulence of speeding vehicles and hasty pedestrians evoke feelings of wonder and disorientation. The vibrant lights become a magical landscape with enticing opportunities and promises of fulfillment."

Paper Art is another Pierian spring digg Paper art was originated over a thousand years ago in Japan. You can use paper for giving your ideas and feelings forms. Night Lights Paintings by Trevor Young American painter Trevor Young paints the night and the lights from plane’s windows, in gas stations and near illuminated buildings. A gloomy atmosphere and a perfect mastery of lights : a selection of his series is available in the next part of the article.

Webs from Packing Tape Packing tape has gotten MacGyver out of many a jam, but he never managed to make an entire home out of the stuff. So he could probably learn something from Viennese/Croatian design collective For Use/Numen. The team uses nothing but packing tape to create huge, self-supporting cocoons that visitors could climb inside and explore. Installed three times in the past year, the next deployment will be next week from June 9–13 at DMY Berlin's International Design Fair, which is now in its 8th year. The installations, which look like the work of horrifyingly large arachnids, grew in scale and scope as the year progressed, first deployed inside a small Croatian gallery, then an abandoned attic during October’s Vienna Design Week.

Wicked Samurais in Cartoon Disguises - My Modern Metropolis - StumbleUpon Artist Ferris Plock is back at the Shooting Gallery in San Francisco but this time he's mashing up samurais not with skateboarders but with cartoons characters we all know and love. Why are Daffy, Snoopy and and Hello Kitty wearing colorful samurai gear? They're not! It's actually those wicked samurais again dressed up in disguise! Just For One Day is the name of Plock's new show which fuses his traditional Japanese style with a rebellious sensibility.

Dream Worlds Revealed On Canvas Along with some magnificent dreams, Jacek Yerka finds inspiration for his masterful paintings from his childhood memories: the places, remembered feelings and smells of 1950′s Poland. He studied fine art and graphic design before becoming a full time artist in 1980… and we’re glad he did. His paintings will take you through incredible worlds of imagination, bending reality in captivating and clever ways fit to inspire a novel or film. See many more examples of his find paintings at yerkaland.com.

Most Creative Paper Art Work Previously we shared some amazing paper art and to follow the tradition here we have selected some more. Peter Callesen the great artist shaped the paper in a way that we can`t Imagine, well that’s true a true artist can create wonders with anything take a look. also see : 125+ Amazing Examples of Origami and Paper Art Ads by Google Unique and colorful portraits by Françoise Nielly Unique and colorful portraits by Françoise Nielly on June 16, 2011 Share this: by Francesco Mugnai Water and ink Art & Design The Italian artist Alberto Seveso takes pictures of ink in different colours blending into water. It might be something that is done a hundreds times before, but this is done better than we've seen saw.