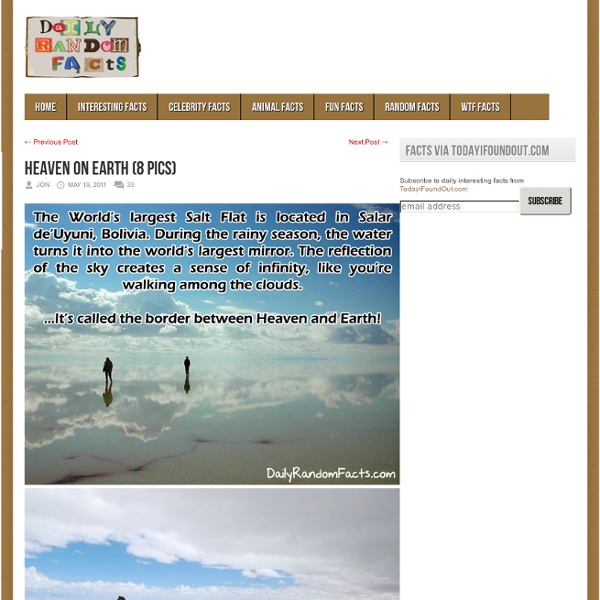 Post-it - Wall of Love Design Art Cartoons Cars About Follow RSS Advertise Search Post-it - Wall of Love - /by @42concepts . Written by Thomas Baekdal | Thursday, August 04, 2011 If you work in an office, you well familiar with the use Post-it notes. The Funniest Animal Photos. Part 1  "Animals have these advantages over man: they never hear the clock strike, they die without any idea of death, they have no theologians to instruct them, their last moments are not disturbed by unwelcome and unpleasant ceremonies, their funerals cost them nothing, and no one starts lawsuits over their wills." ~ Voltaire Still Looking For Paradise? Maldives - justpaste.it Double chain of twenty-six atolls… The Republic of Maldives, or simply the Maldives, is an island nation in the Indian Ocean. It consists of approximately 1,190 coral islands grouped in a double chain of 26 atolls, along the north-south direction, spread over roughly 90,000 square kilometers, making this one of the most disparate countries in the world. The atolls are composed of live coral reefs and sand bars, situated atop a submarine ridge 960 kilometers long that rises abruptly from the depths of the Indian Ocean and runs from north to south. Crystal clear waters, beautiful white sand beaches, swaying palm trees and fabulous dive sites – that’s why the Maldives, is known for being one of the best tropical holiday destinations in the world.

A Splash of Color by Rackat ...from Critique Club... Hi Rackat...ain't I lucky..they assigned your photo to me..ha FIRST IMPRESSION: Horrible shot...what were you thinking???? COMPOSITION: Totally off. It would have worked much better if it were upside down...and reversed horizontaly. TECHNICAL: Focus is toooo sharp. 2007 February 5 - Comet Between Fireworks and Lightning Discover the cosmos! Each day a different image or photograph of our fascinating universe is featured, along with a brief explanation written by a professional astronomer. 2007 February 5 Comet Between Fireworks and Lightning Credit & Copyright: Antti Kemppainen Explanation: Sometimes the sky itself is the best show in town. On January 26, people from Perth, Australia gathered on a local beach to watch a sky light up with delights near and far.

What Do I Need to Do After Losing My Wallet? Good points if you know your wallet is really gone, but 90% of the time, a lost wallet means I misplaced it and it's always going to turn up in the oddest place. Best thing to do is not carry a lot of 'identity theft' stuff in your wallet, in the first place: -Obviously, no one should carry their Social Security card, memorize the number and keep your SS card in a safe. -Driver's license is not much choice, but some people I know keep theirs in their car. Animals Illuminated by the Sun The time of sunset is defined in astronomy as the moment when the trailing edge of the Sun’s disk disappears below the horizon in the west. There are few things in nature as photogenic as the sky at sunset, especially animals. The rich bright gold, pink and orange colors make unusually beautiful pictures of animals illuminated by the sun. Source

Coolest. Stage. Ever Nov 29, 2010 Check out this incredible floating stage on Lake Constance in Bregenz, Austria. The Bregenzer Festspiele (Bregenz Festival) has become renowned for its unconventional staging of shows. Verdi’s opera, “A Masked Ball” in 1999, featured a giant book being read by a skeleton.

This Mill was Abandoned 1866. in Sorrento, Italy This Mill was Abandoned 1866. in Sorrento, Italy inShare5 Tags: Sorrento 19 Comments The Ultimate SCRABBLE Word List Resource « SCRABBLE World To some, SCRABBLE is just a board game to play during family game night or during a casual get-together. Others think of SCRABBLE as a mere hobby. But with any activity, there will always be fanatics—the ones who would rather sell their soul than stop—the ones with a constant yearning for self-improvement—the merciless. Now, fanaticism isn't a bad thing. Being obsessed with the betterment of one's knowledge is actually a great characteristic to have, despite the bad rap "obsession" gets.

25 Most Beautiful Animals Photography on StumbleUpon I think the most beautiful pictures are those made in nature. Nothing compares with the expression of a tiger, the majestic flight of an eagle or the strength of a white bear. Below you can see 25 the most beautiful animal photographs that will capture your attention, and were stumbled on StumbleUpon. Switzerland Switzerland In June 2011, we spent a week in Switzerland, flying into Geneva, with an initial stop in Montreux, followed by a picturesque stay in Wengen, located above the Lauterbrunnen valley. The alps provided a stunning backdrop to explore the area. During our stay in Wengen, a small village that is accessible by train or foot, the main sound heard was cow bells. We took day trips and hikes in the Interlaken area of central Switzerland. The village of Wengen where we stayed in an alpine chalet/hotel, above the Lauterbrunnen valley.

OK GUYS, we are going to make it REAL, i already made the FB group, link is or just search under name "Trip to Bolivia" or just email me, ziggy join in, i already got vonbron approval by masterjedi79 Sep 29

I think the facebook page is great idea too! Who wants to make it!? Email me also at ashley_gee16@hotmail.com by ziggymoonshine Sep 29

well anyone else wanting to go can email me as well mischifairi@gmail.com by vonbaron Sep 28

so my email is inloveandwar@hotmail.com, if anyone interested to make this trip just email me so we can start something, i think its cool to do something crazy once in our life such as this trip.we just need to organize things specially if we are from around world. by masterjedi79 Sep 28

alright! more people to join would be cool by vonbaron Sep 20

how about we make a facebook group about this trip,i kinda feel that some ppl will join and be excited to go too. by masterjedi79 Sep 19

well im seriously up for it,this place is situated in Bolivia, we can see lamas and ruins of old civilisations. all of us in one big happy family bus? we definitly need sandwiches. by masterjedi79 Sep 18

You know I actually wouldn't mind doing that! :) I mean us all going together. >.> not the sandwhiches. by vonbaron Sep 16

I agree, y`all bring the sandwiches and i`ll bring Me! by masterjedi79 Sep 16