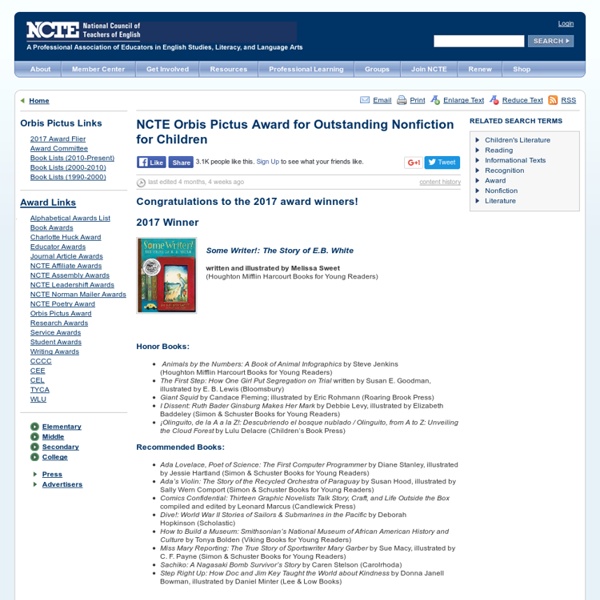 Picture This: Exploring Art Elements in Picture Books image credit: It’s the beginning of another school year and time to get your students familiar with the classroom library. The illustrations in those books in your library provide a great opportunity to introduce or review some basic art concepts. Teachers have always done lots of teaching with pictures but traditionally we have stuck to what’s in the picture rather than how the illustration was made. Here are just a few suggestions of questions to ask for each of the art elements listed. Shape (two dimensional) and Form (three dimensional) What kinds of shapes do you see: common geometrical shapes (circle, square, etc.), irregular shapes, three dimensional shapes? Line What kinds of lines do you see: straight, curvy, jagged, scribbled, diagonal, horizontal, vertical? Color (hue) and Value (lightness or darkness) What different colors do you see? Texture What textures do you notice? Space What takes up the most space? Happy art “reading”! Related July 22, 2013

Welcome to the Odyssey Award home page! | Association for Library Service to Children This annual award is given to the producer of the best audiobook produced for children and/or young adults, available in English in the United States. 2020 Odyssey Award Audiobook Hey, Kiddo: How I Lost My Mother, Found My Father, and Dealt with Family Addiction, produced by Scholastic Audiobooks, written by Jarrett J. Krosoczka and narrated by Jarrett J. Krosoczka, Jeanne Birdsall, Jenna Lamia, Richard Ferrone and a full cast. In a deeply personal production, Jarrett J. “The creative team behind ‘Hey, Kiddo’ has crafted a production that shines, demonstrating the potential in transforming a graphic novel for the audiobook world,” said Odyssey Award Committee Chair Sharon Haupt. 2020 Odyssey Honor Audiobooks Redwood and Ponytail, written by K.A. Two voices, two girls, and two perspectives, combine to powerful effect in this novel in verse about middle school, first love and self-discovery. Take a journey through the four seasons.

WelcomePrizes The AAAS/Subaru SB&F Prizes for Excellence in Science Books celebrate outstanding science writing and illustration for children and young adults. The prizes are meant to encourage the writing and publishing of high-quality science books for all age groups. AAAS believes that, through good science books, this generation, and the next, will have a better understanding and appreciation of science. The prizes began in 2005 by looking back on decades of outstanding science books and honoring five authors and one illustrator for their significant and lasting contribution to children's and young adult science literature and illustration. The prizes emphasize the importance of good science books and encourage children and young adults to turn to science books, not only for information, but for enjoyment too! Thank you to our sponsor, Subaru, for their generous support of the SB&F Prizes. More Stories Read the article in Science highlighting the 2014 finalists! 2014 Finalists Announced

How to Assess an Arts Integration Lesson One of the many things I hear from teachers about attempting an Arts Integration lesson is “how and why should I assess the arts piece”? This is such a valid concern because many classroom teachers have never had any formal training in an artform, nor were they ever taught the pedagogy of teaching the arts in their educational programs. This is something that needs to be provided during teacher education programs, but until that time comes, many teachers are uncomfortable “grading” an Arts Integration lesson product. First off, let’s just start with good teaching practice: If you teach it, you assess it. Secondly, there’s a difference between grading and assessing. Now it just comes to the mechanics of assessing the lesson. Now, many of the rubrics that I’ve seen out there for Arts Integration are okay. Therefore, I have worked with one of my Arts Integration Teacher Liaisons, Amber Foster, to create a different kind of assessment. 1.) 2.) 3.) Want to see a sneak peek? Related

An Illustrated Guide to Guy Debord’s ‘The Society of the Spectacle’ Guy Debord’s (1931–1994) best-known work, La société du spectacle (The Society of the Spectacle) (1967), is a polemical and prescient indictment of our image-saturated consumer culture. The book examines the “Spectacle,” Debord’s term for the everyday manifestation of capitalist-driven phenomena; advertising, television, film, and celebrity. Debord defines the spectacle as the “autocratic reign of the market economy.” Though the term “mass media” is often used to describe the spectacle’s form, Debord derides its neutrality. “Rather than talk of the spectacle, people often prefer to use the term ‘media,’” he writes, “and by this they mean to describe a mere instrument, a kind of public service.” Instead, Debord describes the spectacle as capitalism’s instrument for distracting and pacifying the masses. Debord was a founding member of the Situationist International (1957–1972), a group of avant-garde artists and political theorists united by their opposition to advanced capitalism. Art Rx

50+ Picture Books about Mixed Race Families A bit late to the party, seeing that Mixed Heritage Week ended yesterday! But with ever-increasing numbers of multiracial families (growing three times as fast as the US population as a whole!), these picture books are relevant at any time of the year. I found so many lovely children’s books about multiracial families that the list just kept growing longer and longer… 50+ Picture Books about Mixed Race Families Babies & Toddlers 15 Things Not to Do with a Babyby Margaret McAllister Don’t lend your baby to a kangaroo, don’t let it play with an elephant and don’t plant it in the garden! Where’s Lenny? Where’s Lenny? Let’s Feed the Ducks // Let’s Go To Playgroup // Let’s Have Fun // Let’s Go to Bedby Pamela Venus I could only find information on Let’s Feed The Ducks but not on the other three of this beautifully illustrated series of board books. Oscar’s Half Birthdayby Bob Graham A multiracial family celebrates baby Oscar’s Half birthday with a fun outing to the park. Preschool What a Family!

The Sophie Brody Award | Reference & User Services Association (RUSA) The Sophie Brody Award was first awarded in 2006, and includes a medal for the winner, as well as citations for selected honor books. It is funded by Arthur Brody and the Brodart Foundation, and is given to encourage, recognize and commend outstanding achievement in Jewish literature. Works for adults published in the United States in the preceding year will be eligible for the award. The award is named for Sophie Brody, a philanthropist and community volunteer who held major leadership positions in the Jewish community. Nominations Those interested in submitting a book for consideration should contact the committee chair for instructions. In the context of this award, Jewish literature will be defined as fiction, nonfiction, or poetry that has as its central purpose the exploration of the Jewish experience. A book may be selected for at least one, and preferably more than one, of the following reasons: It possesses exceptional literary merit. Recipients

Welcome to the Robert F. Sibert Informational Book Medal home page! | Association for Library Service to Children The Robert F. Sibert Informational Book Medal is awarded annually to the author(s) and illustrator(s) of the most distinguished informational book published in the United States in English during the preceding year. The award is named in honor of Robert F. 2021 Medal Winner Honeybee: The Busy Life of Apis Mellifera, written by Candace Fleming, illustrated by Eric Rohmann, and published by Neal Porter Books/Holiday House Honeybee: The Busy Life of Apis Mellifera is an informational book about the life cycle of the assiduous honeybee. “Fleming’s narrative is both scientifically accurate and emotionally satisfying,” said Sibert Medal Committee Chair Brandy Sanchez. 2021 Honor Books How We Got to the Moon: The People, Technology, and Daring Feats of Science Behind Humanity's Greatest Adventure, written and illustrated by John Rocco, and published by Crown Books for Young Readers, an imprint of Random House Children’s Books, a Division of Penguin Random House.