A selection of interesting Medieval Names 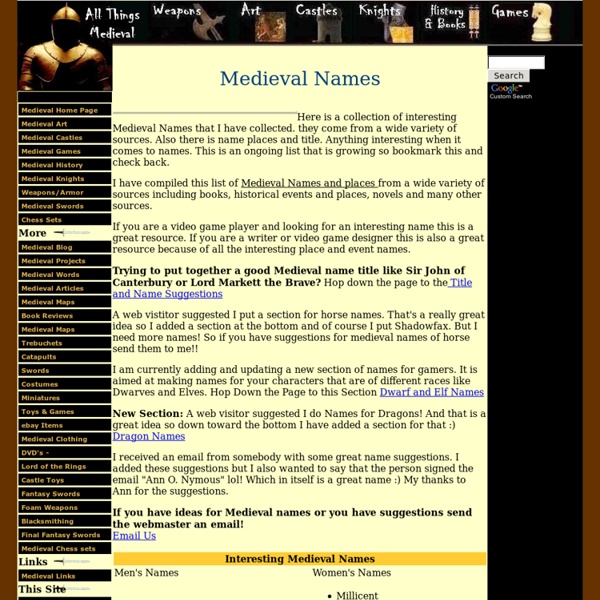 Medieval Names Here is a collection of interesting Medieval Names that I have collected. they come from a wide variety of sources. Also there is name places and title. Anything interesting when it comes to names. This is an ongoing list that is growing so bookmark this and check back. I have compiled this list of Medieval Names and places from a wide variety of sources including books, historical events and places, novels and many other sources. If you are a video game player and looking for an interesting name this is a great resource. Trying to put together a good Medieval name title like Sir John of Canterbury or Lord Markett the Brave? A web vistitor suggested I put a section for horse names. I am currently adding and updating a new section of names for gamers. New Section: A web visitor suggested I do Names for Dragons! I received an email from somebody with some great name suggestions. If you have ideas for Medieval names or you have suggestions send the webmaster an email!

No Plot? No Problem!: Five Secret Steps to Story Building September is officially the start of NaNo Prep! To celebrate, we’re excerpting what some might call the NaNoWriMo Bible: No Plot? No Problem! Once you have these steps down, you’ll be churning out books faster than Krispy Kreme churns out hot doughnuts. Construct the Cannon. Whether it’s true love, sweet revenge, or a cupcake-filled swimming pool, a character’s greatest desire is the cannon that propels her toward her destiny. Build the mountain. Create conflict, suspense, and heart-wrenching drama by stacking a mountain of setbacks (fears, weaknesses, villains, spider monkeys) in front of your protagonist. Light the fuse. Plot the problems. Think of the last comedy you saw. Meet him or her on the other side. At the beginning, your protagonist may be a sad and reclusive computer nerd, but after saving the world from a nuclear holocaust she becomes a confident warrior. Excerpted by Michael Adamson, with permission from Chronicle Books. Photo by Flickr user ~db~.

Joseph Campbell’s "The Hero’s Journey" Ran across this post from the blog What’s In My Manvelope, hosted by John T. Trigonis whose About page reads: “Published poet, indie filmmaker, & freelance professor by day … & pretty much the same things by night.” In the post, Trigonis discusses writing and rewriting (six drafts) his current script project “A Beautiful Unlife.” He also discusses various screenwriting books he’s read and concludes this: Write from the soul of your story and you’ll never go wrong. And in terms of books, the only book every screenwriter needs to fully digest is one that’ll teach you nothing about screenwriting but everything about story (no, not Aristotle’s Poetics, although it comes in at a close second!) Then provides this lovely visual summary of The Hero’s Journey As longtime readers of this blog know, I’m a big fan of Joseph Campbell. Indeed it’s not just Star Wars: A New Hope which seems to hew closely to The Hero’s Journey. So how to sum up this post?

NaNo Prep: The Official NaNoWriMo Character Questionnaire Want more preparation exercises? Check out National Novel Writing Month’s Young Writers Program’s Novelist Workbooks, which our nonprofit provides free-of-charge to more than 2,000 educators and 8,000 young writers around the world! “Most people think that an intriguing plot is what makes a story good, but the truth is that exciting plots are made up of original and well-developed characters. Not only are characters with hidden depths and secrets more fun to read about, they’re also more fun to write about. It’s a great idea for you, the author, to try and get to know your characters before you begin writing. Name:Age:Height:Eye color:Physical appearance:Strange or unique physical attributes:Favorite clothing style/outfit:Where does he or she live? Photo courtesy of Artsy Fartsy Mama.

A 7-Step Guide to Big Picture Revision (With Bonus Checklists!) The “Now What?” Months are here! In 2014, we’ll be bringing you advice from authors who published their NaNo-novels, editors, agents, and more to help you polish November’s first draft until it gleams. Author Wendy Mass guides you through big-picture revision… complete with handy questionnaires: Ah, revision. My favorite part of the writing process. You’ve already done the hard part. Insert page numbers and print it out, double-spaced. Take a deep breath and slowly dive in. Mark the places that make you laugh or cry. Now, go back through the manuscript again and write a list of all the scenes in each chapter and the pages they are on. You only need a few words of description for each section: Electricity goes out (21-24), ring bearer loses the ring (110-111), teacher goes to hospital after swallowing frog (83-86). Here come the highlighters! Do some of them only show up a few times? When you are done, anything that is left un-highlighted is your main plotline.

Neil Gaiman: Why our future depends on libraries, reading and daydreaming It’s important for people to tell you what side they are on and why, and whether they might be biased. A declaration of members’ interests, of a sort. So, I am going to be talking to you about reading. I’m going to tell you that libraries are important. And I am biased, obviously and enormously: I’m an author, often an author of fiction. So I’m biased as a writer. And I’m here giving this talk tonight, under the auspices of the Reading Agency: a charity whose mission is to give everyone an equal chance in life by helping people become confident and enthusiastic readers. And it’s that change, and that act of reading that I’m here to talk about tonight. I was once in New York, and I listened to a talk about the building of private prisons – a huge growth industry in America. It’s not one to one: you can’t say that a literate society has no criminality. And I think some of those correlations, the simplest, come from something very simple. Fiction has two uses. It’s tosh.