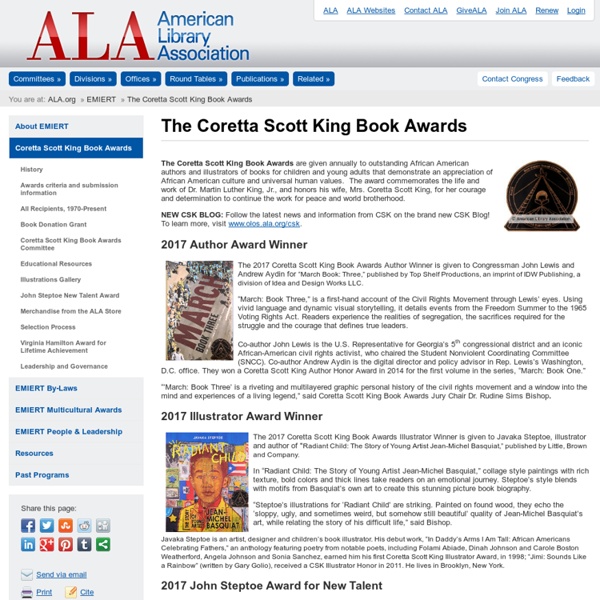 The Coretta Scott King Book Awards are given annually to outstanding African American authors and illustrators of books for children and young adults that demonstrate an appreciation of African American culture and universal human values. The award commemorates the life and work of Dr. Martin Luther King, Jr., and honors his wife, Mrs. Coretta Scott King, for her courage and determination to continue the work for peace and world brotherhood. NEW CSK BLOG: Follow the latest news and information from CSK on the brand new CSK Blog! To learn more, visit www.olos.ala.org/csk. 2017 Author Award Winner The 2017 Coretta Scott King Book Awards Author Winner is given to Congressman John Lewis and Andrew Aydin for “March Book: Three,” published by Top Shelf Productions, an imprint of IDW Publishing, a division of Idea and Design Works LLC. “March: Book Three,” is a first-hand account of the Civil Rights Movement through Lewis’ eyes. Co-author John Lewis is the U.S. 2017 Illustrator Award Winner Dr. Related:  Multicultural Literature Resources, Activities, and Units

Welcome to the Caldecott Medal Home Page! | Association for Library Service to Children Click here for Caldecott Medal Winners and Honor Books, 1938-Present The Caldecott Medal was named in honor of nineteenth-century English illustrator Randolph Caldecott. It is awarded annually by the Association for Library Service to Children, a division of the American Library Association, to the artist of the most distinguished American picture book for children. 2021 Medal Winner We Are Water Protectors, illustrated by Michaela Goade, written by Carole Lindstrom, and published by Roaring Brook Press, a division of Holtzbrinck Publishing Holdings. Michaela Goade’s vivid, swirling watercolors capture the sacredness of water and amplify Carole Lindstrom’s passionate call to action and celebration of Indigenous ancestry and community. 2021 Honor Books A Place Inside of Me: A Poem to Heal the Heart, illustrated by Noa Denmon, written by Zetta Elliott, and published by Farrar Straus Giroux Books for Young Readers, an imprint of Macmillan Publishing Group. Cozbi A.

The Michael L. Printz Award for Excellence in Young Adult Literature The Michael L. Printz Award annually honors the best book written for teens, based entirely on its literary merit, each year. In addition, the Printz Committee names up to four honor books, which also represent the best writing in young adult literature. The award's namesake was a school librarian in Topeka, Kansas, and a marketing consultant for Econo-Clad, as well an active member of YALSA. Librarians who wish to buy seals can find them in the ALA Online Store. Award Policies and Procedures Suggest a Title Committee Information Who Was Michael L. Seals Winners and Honor Books Best of the Best Teen Book Finder App Welcome to the Newbery Medal Home Page! | Association for Library Service to Children Click here for Newbery Medal and Honor Books, 1922-Present The Newbery Medal was named for eighteenth-century British bookseller John Newbery. It is awarded annually by the Association for Library Service to Children, a division of the American Library Association, to the author of the most distinguished contribution to American literature for children. 2021 Medal Winner When You Trap a Tiger, written by Tae Keller, published by Random House Children’s Books, a division of Penguin Random House. This masterpiece of magical realism is an evocative story of love, loss, and hope that brings Korean folklore to life. 2021 Honor Books All Thirteen: The Incredible Cave Rescue of the Thai Boys’ Soccer Team, written by Christina Soontornvat, published by Candlewick Press. BOX: Henry Brown Mails Himself to Freedom, written by Carole Boston Weatherford, illustrated by Michele Wood, and published by Candlewick Press. A Wish in the Dark, written by Christina Soontornvat, published by Candlewick Press.

3 Apples Book Award Book Award Winners : Tomás Rivera Book Award : Texas State University Click the image above for more information about the book and author Works for Older Readers: Out of Darkness by Ashley Hope Pérez. Carolrhoda LAB Pérez’s historical fiction explores the devastating consequences of racism in the context of the worst school disaster in U.S. history. Set in New London, Texas in 1936 when oil drilling created new jobs, commerce, and a new school, we see a community reckoning with a legacy of tripartite segregation among White, Black, and Mexican families. Knickerbocker Award for Juvenile Literature In 1991, NYLA/SSL established the Knickerbocker Award for Juvenile Literature. It recognizes a New York State author who has demonstrated, through a body of work, a consistently superior quality which supports the curriculum and the educational goals of New York State Schools. The award is named for a group of 19th century New York State authors who wished to nurture a national literature. It is presented annually to a living author/illustrator currently residing in New York State. Tiffany and Company designed the crystal award for which Beverly Choltco Devlin designed the graphic. NYLA/SSL members may nominate a New York State author or illustrator by submitting this form, filled out in its entirety, to the Knickerbocker Award Chairperson by March 31st of a given year. This is your opportunity not only to help recognize an outstanding author/illustrator, but also to help choose the banquet speaker for the NYLA/SSL Spring Conference! Knickerbocker Award Winners 2014- Doreen Cronin

Notable Books List | Reference & User Services Association (RUSA) The Current List (2014)The 2013 ListThe 2012 ListThe 2011 ListThe 2010 ListThe 2009 List Purpose: Since 1944, the goal of the Notable Books Council has been to make available to the nation’s readers a list of 25 very good, very readable, and at times very important fiction, nonfiction, and poetry books for the adult reader. History: The Notable Books List evolved from an activity sponsored by the Lending Round Table of the American Library Association (ALA) in 1944. Since then, the selection of a list of notable or outstanding books of the year has been carried out in a variety of ways, and under various auspices. For three years, the selection was known as Outstanding Books, and was prepared by the ALA Lending Section, with the assistance of membership votes. In 1947, the Division of Public Libraries assumed responsibility of producing the list, changing the name to Notable Books. Council Operations: The operations of the Council have undergone subtle changes during the 1990's.