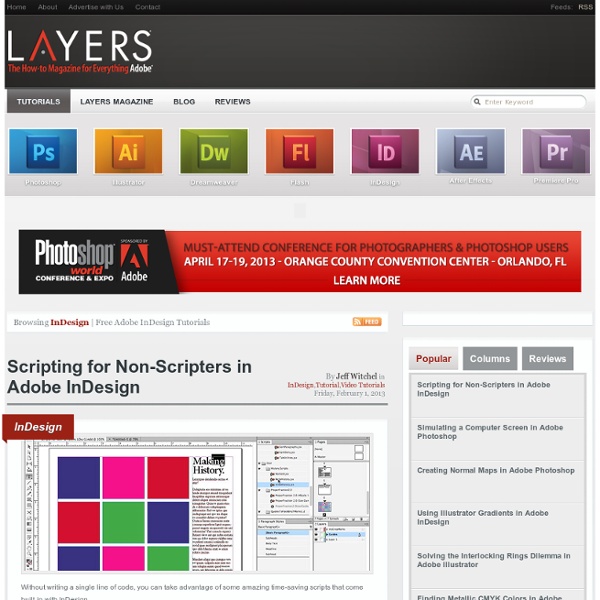 Designers Bookshop – Grid Calculator Pro Edition - Plug-in for Adobe InDesign Experience Adobe InDesign ... on steroids! While many designers in the world are wasting hours after hours trying to create layout that works, our clients only need to spend minutes. Watch a video on how to go from scratch to finished layout! Discover the tool that a former Swedish graphic design student once dreamed about, he searched everywhere for it, until he realized that nobody had ever created it.

The Complex Grid « Whatype 13/11/2009 – I’ve made a 2010 Calendar using the Complex Grid and I’ve explained it step by step. You can check that article here. I hope you like it Karl Gerstner designed this grid for his work on the CAPITAL magazine. This is actually a six-column grid with a four-column grid superimposed. Karl suggests that this grid requires considerable study, and a designer would have to spend a great deal of time working with it before he could make free use of it in a creative sense. What is EXIF data? Almost all digital cameras save JPEG files with EXIF (Exchangeable Image File) data. Camera settings and scene information are recorded by the camera into the image file. Examples of stored information are shutter speed, date and time a photo was taken, focal length, exposure compensation, metering pattern and if a flash was used. Other formats that included EXIF data inclue RAW and TIFF files. Use the data as a learning tool Many camera owners study EXIF to compare successful photos to those that are not.

15 Great Resources for Learning Adobe InDesign Alright vector lovers, let's turn on multiple-pages 'eh! Adobe Illustrator is great, it's my favorite program actually, but even with the new Artboards feature in CS4 it just doesn't compare to InDesign for creating multi-page documents. If you've been meaning to get started with InDesign, but have put it off for whatever reason, well now is the time to get stared! This article rounds up a bunch of great resources on learning Adobe InDesign, which will get users started and keep intermediate users growing. And for any of you advanced InDesign users out there, or professional InDesign craftsmen, drop us a line because we're looking to add more InDesign resources to Vectortuts+. Now let's review these InDesign resources!

How to Impose Business Cards for Digital Printing with InDesign Sometimes you find yourself in a situation when your client needs to quickly print some business cards and you are the one, who gets the responsibility to do it. In this tutorial you will learn how quickly an effectively impose business card without using any paid imposition plug-in, using some basic InDesign functions and just in a few clicks. Step 1 Create a new InDesign document and set the page size to 320x450 mm. This is the SRA format which stands for "supplementary raw format A". Page Layout Design Home > Design Tips > Page Layout Design In this tutorial, we’ll explore the design phase of document creation. With the grid as our layout guide, we’ll look at the various ways that elements—text, images, graphic objects, and so on—can work together to produce effective layouts.

Five simple steps to designing grid systems – Part 2 – July 16th, 2005 – In part one of this Simple Steps series I talked about how to use a simple ratio, that of the paper size you are using, to create a symmetrical grid on which to create your designs. This, the second part in the series, will deal with other ratios and how they can be combined to create more complex grid systems. I’ve talked a few times about using the Golden, or ‘Divine’, Section in the grid systems you design. Automate Your Designs with Nested Styles in Adobe InDesign We’re all used to working with style sheets (or least we should be). With each new version of InDesign, there seems to be a new way to style your content. We started with paragraph and character styles, then we got nested styles, followed by object styles, and finally table styles in InDesign CS3. As you can see, nested styles is not really new but it’s something that you should be taking advantage of, so let’s get to it. 1 CREATE A NEW DOCUMENT While you could use an existing document for this tutorial, it’s probably best to begin with a new document. This way you won’t have any extra styles in your Styles panels that are left over from other things you’ve formatted.

InDesign Docs Support for DPS Apps in iOS 7 and iOS 5 Let’s start with a quick summary. Older (pre-v24) apps don’t work on iOS 7. Any DPS app created with v24 and earlier fails to work properly in devices that run iOS 7. For one thing, landscape folios just don’t appear. If you have a v24 or earlier DPS app in the App Store, you should update it.Known issues with v25/v26 apps on iOS 7. Writing Effectively in InDesign Using Book InDesign allows you to collect all documents in a Book. Using Book, you can easily synchronize styles in every document and maintain a consistent layout throughout your project. In this tutorial, we will create a book made from 3 chapters, complete with Table of Content, Introduction, and a Cover. You will learn the concepts of InDesign, from applying styles, adding page numbers, warping text, using variables and master pages. Let's get started! Step 1: Creating the First Document