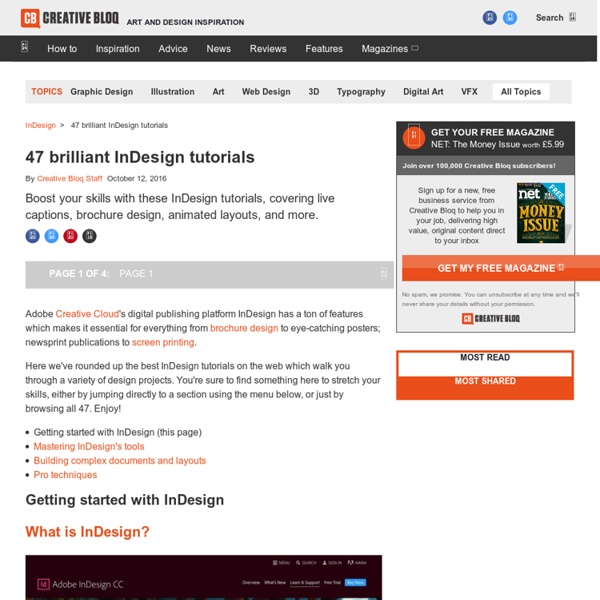 Adobe Creative Cloud's digital publishing platform InDesign has a ton of features which makes it essential for everything from brochure design to eye-catching posters; newsprint publications to screen printing. Here we've rounded up the best InDesign tutorials on the web which walk you through a variety of design projects. You're sure to find something here to stretch your skills, either by jumping directly to a section using the menu below, or just by browsing all 47. Enjoy! Getting started with InDesign What is InDesign? If you're an absolute newcomer to InDesign, spend a couple of minutes watching this short tutorial that explains exactly what the software is, its purpose and who uses it. How to get started with InDesign CC In this 43-minute tutorial, worldwide creative suite design evangelist for Adobe Terry White demonstrates 10 things beginners want to know how to do in Adobe InDesign CC. Basic tools overview Working with frames InDesign is all about frames. Working with graphics

InDesign Templates Until InDesign CS4, Adobe shipped a number of templates with InDesign. However, when CS5 shipped, those templates mysteriously disappeared. After a year of legal wrangling with Adobe, we have obtained permission to distribute those templates here, at InDesignSecrets.com. Please note: These templates are saved in the CS4 format, so you can open them in InDesign CS4 and later.We're distributing the templates "as is" and subject to Adobe's own licensing agreements (see below).These are templates, which means you may create pretty much any InDesign documents you want based on them.

26 Most Recent Adobe Illustrator Tutorials It’s been such a long time since we have posted an article on Adobe Illustrator Tutorials. So, in today’s post, we’d like to share with you these step-by-step tutorials that were released since January of this year to give you a dose of new ideas when trying to design so that you’ll achieve a more beautiful and creative artwork. We’ve handpicked these tutorials because Adobe illustrator offers a variety of advanced tools to smooth out any design, optimize structure proportions and emphasize some beautiful details. Here are the 26 Most Recent Adobe Illustrator Tutorials that we’ve found around the web which are helpful in learning new techniques in brushing up your vector design skills. Check out this collection and feel free to learn from these tutorials.

The 16 best movie posters of 2016 Movie posters not only hint at the storyline of the film – it also gives the studio a chance to get creative (sometimes!). From illustration to photography, 3D art to clever typography placement, here we’ve picked out 16 of our favourite movie posters of 2016 that thought outside of the box. So, without further ado, in reverse order... 16. Paterson

Te Ropu Awhina – Inkscape Tutorial Here’s an example of just some of what Inkscape is capable of Tutorial Provided by: Miles Benton, from Te Ropu Awhina Whanau This tutorial will take you through some of the basics of Inkscape and introduce you to several tools which will be useful when creating not only posters, but figures as well. I’m going to assume you have Inkscape installed and running (if not download from: it’s FREE!). Setting up the Document

43 amazing After Effects tutorials Want to know how to do something in After Effects? The web is brimming with tutorials for people wanting to learn about Adobe Creative Cloud's 3D, motion graphics and animation software. But sometimes it can be an uphill struggle finding the tutorial that's right for you. Designing conference posters - Colin Purrington A large-format poster is a big piece of paper or wall-mounted monitor featuring a short title, an introduction to your burning question, an overview of your novel experimental approach, your amazing results in graphical form, some insightful discussion of aforementioned results, a listing of previously published articles that are important to your research, and some brief acknowledgement of the tremendous assistance and financial support conned from others — if all text is kept to a minimum (less than a 1000 words), a person could fully read your poster in 5-10 minutes. Section content • DOs and DON’Ts • Adding pieces of flair • Presenting • Motivational advice • Software • Templates • Printing • Useful literature • Organizing a poster session What to put in each section

Videohive Photo Projection Kit » Free After Effects Templates Videohive Photo Projection Kit Photo Projection Kit 15488192 Videohive - Free Download AE Project After Effects Version CC 2015, CC 2014, CC, CS6, CS5.5 | No plugins | 1920x1080 | 93 Mb Animate any image professionally with PHOTO PROJECTION KIT. This is a feature-rich and easy to use tool, which even the complete AE newbie can handle. Poster: Predicting genotype from phenotype · Bioinformatics Zen Poster: Predicting genotype from phenotype · Posted: Jul 15, 2012 I presented the below poster at the 2012 American Society of Microbiology Meeting. This research demonstrates how we have been comparing and testing Pseudomonas strains for twitching motility to identify the genes responsible for phenotypic differences. Click on the image below to see a larger version. As with my previous ASM poster, I think less text and a more visual overview is more likely to attract interest and start a discussion. ASM meetings usually have posters numbering in the thousands so I think a text-heavy poster can be a lottery for getting people to talk to you.

How to create a mixed-media collage Retro effects and collage maker tools are very much in vogue at the moment, with people turning to scrapbook-style collages to distribute their photo collections. With this in mind, there are many collage techniques that can be used in design and one such is the mixed-media collage. This tutorial uses the latest some basic layering and masking techniques, coupled with some paper craft elements that we'll montage together to create an interesting textured collage with lots of depth. There are several tools in Photoshop that are used by creatives over and over again: I'll take you through some very versatile processes that you can incorporate with these tools into your own workflow. We'll be designing an album cover, but the mixed-media techniques can be applied to any project.

Doomsday Prep for the Super-Rich Steve Huffman, the thirty-three-year-old co-founder and C.E.O. of Reddit, which is valued at six hundred million dollars, was nearsighted until November, 2015, when he arranged to have laser eye surgery. He underwent the procedure not for the sake of convenience or appearance but, rather, for a reason he doesn’t usually talk much about: he hopes that it will improve his odds of surviving a disaster, whether natural or man-made. “If the world ends—and not even if the world ends, but if we have trouble—getting contacts or glasses is going to be a huge pain in the ass,” he told me recently. “Without them, I’m fucked.” Huffman, who lives in San Francisco, has large blue eyes, thick, sandy hair, and an air of restless curiosity; at the University of Virginia, he was a competitive ballroom dancer, who hacked his roommate’s Web site as a prank. In private Facebook groups, wealthy survivalists swap tips on gas masks, bunkers, and locations safe from the effects of climate change.