Create PDF Forms using InDesign CS6. PDF forms are a useful tool but can be time-consuming to create. 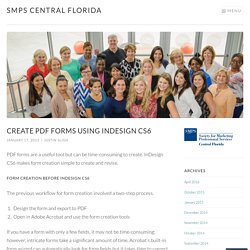 InDesign CS6 makes form creation simple to create and revise. Form creation before InDesign CS6 The previous workflow for form creation involved a two-step process. Design the form and export to PDFOpen in Adobe Acrobat and use the form creation tools If you have a form with only a few fields, it may not be time-consuming; however, intricate forms take a significant amount of time.

Form Creation using InDesign CS6 InDesign CS6’s Buttons and Forms palette provides the ability to add form fields, eliminating the extra step in Acrobat. 1. For use as an example, I have put together a team member information form. The initial layout must include a text frame for each form field, a rectangle for each check box or radio button, and a rectangle or shape for each button. 2. Select each text frame that will be used as a form field. Uncheck “Multiline” and set the font size to “Auto”. Give your form field a name. 4. 5. 5. InDesign How-To: Designing with Data. InDesign Scripts And Plugins To Speed Up Your Work. Advertisement Few applications feel as complete as Adobe’s InDesign. 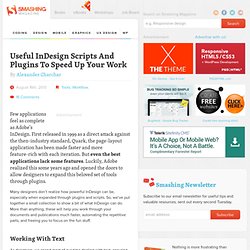 First released in 1999 as a direct attack against the then-industry standard, Quark, the page-layout application has been made faster and more feature-rich with each iteration. But even the best applications lack some features. Luckily, Adobe realized this some years ago and opened the doors to allow designers to expand this beloved set of tools through plugins. Many designers don’t realize how powerful InDesign can be, especially when expanded through plugins and scripts. Working With Text As designers, we spend most of our time dealing with text, ensuring that it’s inviting, easy to read and easy to navigate. Line Numbering This line-numbering plugin does exactly what it says on the box: it gives every line on a page a number. 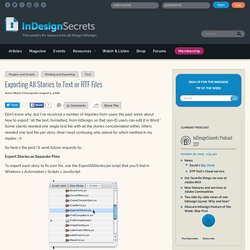 " Some clients needed one single text file with all the stories concatenated within, others needed one text file per story. (And I kept confusing who asked for which method in my replies ;-)) So here's the post I'll send future requests to... Export Stories as Separate Files To export each story to its own file, use the ExportAllStories.jsx script that you'll find in Windows > Automation > Scripts > JavaScript: The script is installed by default in CS3. Double-click on the script and choose a format: You're prompted for a folder location in which to export the stories and zip-zap, you're done. I don't think it'd be too hard to adjust the script so it picks up the first word of the story as its title, or the Script Label if you apply one to each story.

Community: Get rid of ICC profile. So my first question is: If I save the As, with unchecked "include profile", will the colors in the image remain absolutely the same? Not necessarily. How ID handles placed images with conflicting profiles depends on how you set the Color Setting’s CMYK Color Management Policy when the document was created. If you chose Preserve Embedded then any placed image with a profile that conflicts with your document's profile will get converted to document CMYK when you export. So with Preserve Embedded, if you placed a CMYK image filled with 50% black with a US Coated SWOP profile in your doc that's assigned FOGRA39, the 50% black would get converted to a CMY mix on a PDF/X-a export. If you chose Preserve Numbers (Ignore Linked Profiles) or Off, then InDesign would ignore the SWOP profile and the 50% black would export unchanged.

Also keep in mind that simply opening Color Settings and changing the CM policy doesn't change a document's policy. InDesign Scripts And Plugins To Speed Up Your Work. InDesign * Formatting paragraphs. Adjust paragraph spacing You can control the amount of space between paragraphs. 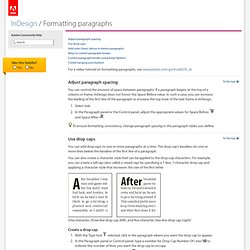 If a paragraph begins at the top of a column or frame, InDesign does not honor the Space Before value. In such a case, you can increase the leading of the first line of the paragraph or increase the top inset of the text frame in InDesign. Select text.In the Paragraph panel or the Control panel, adjust the appropriate values for Space Before and Space After . To ensure formatting consistency, change paragraph spacing in the paragraph styles you define. Use drop caps You can add drop caps to one or more paragraphs at a time. You can also create a character style that can be applied to the drop‑cap characters. Raised cap ) by specifying a 1‑line, 1‑character drop cap and applying a character style that increases the size of the first letter. One-character, three-line drop cap (left), and five-character, two-line drop cap (right)