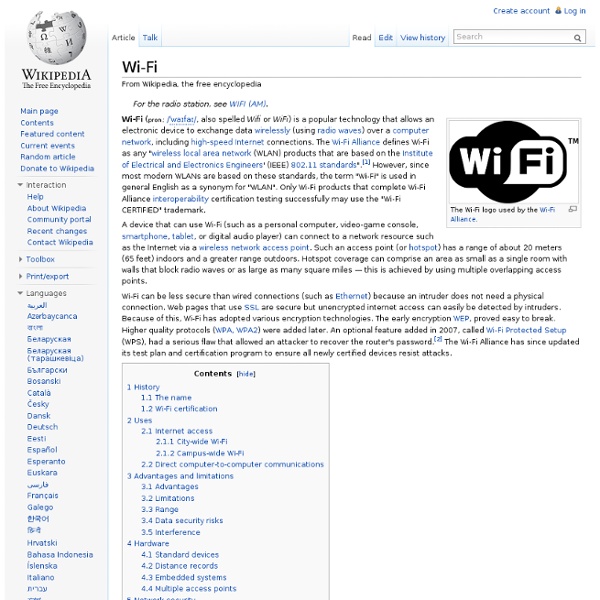 Wi-Fi, also spelled Wifi or WiFi, is a technology that allows an electronic device to exchange data or connect to the internet wirelessly using 2.4 GHz UHF and 5 GHz SHF radio waves. The name is a trademark name, and was stated to be a play on the audiophile term Hi-Fi. The Wi-Fi Alliance defines Wi-Fi as any "wireless local area network (WLAN) products that are based on the Institute of Electrical and Electronics Engineers' (IEEE) 802.11 standards".[1] However, since most modern WLANs are based on these standards, the term "Wi-Fi" is used in general English as a synonym for "WLAN". Only Wi-Fi products that complete Wi-Fi Alliance interoperability certification testing successfully may use the "Wi-Fi CERTIFIED" trademark. Depiction of a device sending information wirelessly to another device, both connected to the local network, in order to print a document. Wi-Fi can be less secure than wired connections (such as Ethernet) because an intruder does not need a physical connection.

Firewall (computing) An illustration of where a firewall would be located in a network. In computing, a firewall is a software or hardware-based network security system that controls the incoming and outgoing network traffic by analyzing the data packets and determining whether they should be allowed through or not, based on applied rule set. A firewall establishes a barrier between a trusted, secure internal network and another network (e.g., the Internet) that is not assumed to be secure and trusted.[1] Firewall technology emerged in the late 1980s when the Internet was a fairly new technology in terms of its global use and connectivity. The predecessors to firewalls for network security were the routers used in the late 1980s:[3] The first paper published on firewall technology was in 1988, when engineers from Digital Equipment Corporation (DEC) developed filter systems known as packet filter firewalls. Packet filters act by inspecting the "packets" which are transferred between computers on the Internet.

Chinese Military Suspected in Hacker Attacks on U.S. Satellites Oct. 27 (Bloomberg) -- Computer hackers, possibly from the Chinese military, interfered with two U.S. government satellites four times in 2007 and 2008 through a ground station in Norway, according to a congressional commission. The intrusions on the satellites, used for earth climate and terrain observation, underscore the potential danger posed by hackers, according to excerpts from the final draft of the annual report by the U.S.-China Economic and Security Review Commission. The report is scheduled to be released next month. “Such interference poses numerous potential threats, particularly if achieved against satellites with more sensitive functions,” according to the draft. A Landsat-7 earth observation satellite system experienced 12 or more minutes of interference in October 2007 and July 2008, according to the report. The draft report doesn’t elaborate on the nature of the hackers’ interference with the satellites. Chinese Military Writings Chinese Denials Relying on the Internet

IEEE 802.11 IEEE 802.11 is a set of media access control (MAC) and physical layer (PHY) specifications for implementing wireless local area network (WLAN) computer communication in the 2.4, 3.6, 5 and 60 GHz frequency bands. They are created and maintained by the IEEE LAN/MAN Standards Committee (IEEE 802). The base version of the standard was released in 1997 and has had subsequent amendments. The standard and amendments provide the basis for wireless network products using the Wi-Fi brand. While each amendment is officially revoked when it is incorporated in the latest version of the standard, the corporate world tends to market to the revisions because they concisely denote capabilities of their products. As a result, in the market place, each revision tends to become its own standard. The LinksysWRT54G contains a router with an 802.11b/g radio and two antennae General description[edit] History[edit] 802.11 technology has its origins in a 1985 ruling by the U.S. Protocol[edit] 802.11b[edit]

Suspected US satellite hacking attacks: Reaction 28 October 2011Last updated at 13:07 The report claims the Landsat-7 satellite experienced at least 12 minutes of interference Hackers interfered with two US satellites four times between 2007 and 2008, according to reports. The claim is made in a draft paper prepared for the US-China Economic and Security Review Commission, according to the Bloomberg news agency. It said the incidents involved the Landsat-7 and Terra AM-1 earth observation systems which were targeted through a ground station in Norway. The report highlights the risks that would have been posed had the breaches involved satellites with "more sensitive functions". The draft document notes that previous penetrations have involved individuals linked to the Chinese underground community. The BBC asked three security experts for their views: If there really has been a serious security problem with these two satellites, I would argue that to be entirely due to negligence by its designers or operators.

Proxy server Communication between two computers (shown in grey) connected through a third computer (shown in red) acting as a proxy. Note that Bob doesn't know whom the information is going to, which is why proxies can be used to protect privacy. Types of proxy[edit] A proxy server may reside on the user's local computer, or at various points between the user's computer and destination servers on the Internet. Forward proxies[edit] A forward proxy taking requests from an internal network and forwarding them to the Internet. Forward proxies are proxies in which the client server names the target server to connect to.[2] Forward proxies are able to retrieve from a wide range of sources (in most cases anywhere on the Internet). The terms "forward proxy" and "forwarding proxy" are a general description of behavior (forwarding traffic) and thus ambiguous. Open proxies[edit] An open proxy forwarding requests from and to anywhere on the Internet. Reverse proxies[edit] Uses of proxy servers[edit] Translation[edit]

Chinese Military Blamed For Hacking U.S. Satellites - Government - Security Congressional investigators say two Earth observation satellites were hacked four times in recent years and it appears the Chinese military is responsible. (click image for larger view) Slideshow: NASA, Microsoft Reveal Mars In Pictures China's military was likely responsible for hacking two U.S. satellites on four separate occasions several years ago, activity that could pose major threats to these types of operations if more serious intrusions occur, according to a Congressional report. Two satellites--one controlled by NASA and the other by the space agency and the U.S. Specifically, Landsat-7--an Earth observation satellite managed by both parties--experienced 12 or more minutes of interference on Oct. 20, 2007. Terra EOS, another Earth observation satellite managed solely by NASA, experienced two or more minutes of interference on June 20,2008, and then nine or more minutes of interference again on Oct. 22, 2008. More Insights

Tech Know: CHoosing an e-reader Technology continues to advance day after day to become one of the most important aspects of a person's life. Get tips on tech and learn about choosing better equipment from eHow's Tech Know. Choosing an E-Book Reader A good E-Book reader will allow you to take not just your favorite book but your entire collection with you wherever you go. Get tips on choosing an E-Book reader with help from an expert in this free video clip. Take Better Smart Phone Photos Just because your smart phone has a great camera doesn't mean you can expect every last picture to come out perfect. Selecting a Cell Phone Plan That Meets Your Needs Choosing a cell phone plan that works for you requires careful consideration for both budget and features. What You Need in a Digital Camera Picking the right digital camera for you can be a tricky exercise. Get Online: Wireless Ways to Change Your Life Communications today require constant exchange of information between people at different locations instantaneously.

Spy satellite chief's blunt talk is an eye-opener September 16, 2011 Kimberly Dozier, The Associated Press WASHINGTON — As it turns 50, the ultra-secretive National Reconnaissance Office is putting a multibillion-dollar misstep behind it and casting its spy satellites on new enemies, from al-Qaida bomb planters to North Korean nuclear engineers, according to its chief. The agency has launched six satellites in seven months, "the best we've done in about 25 years," said director Bruce Carlson, ticking off what he saw as milestones during rare comments Thursday to reporters. Data gathered from the NRO's Gorgon Stare of satellites — named for the mythological gaze that could turn a person to stone — was hailed as key to helping plan the Navy SEAL raid against Osama bin Laden and to guiding NATO and rebel forces in Libya, Carlson said. The NRO was founded during the Cold War on Sept. 6, 1961, to spy on the Soviet Union, China and other enemies in the U.S. battle against communism. Instead, the Boeing program never took off, literally.

Samsung Galaxy S: 15 Free Android Applications UCS Satellite Database Share This! Share on facebookShare on twitterShare on google_plusone_share Union of Concerned Scientists Skip to main content Center for Science and Democracy Text SizeAAA Home » Nuclear Weapons » Solutions » Enhance Space Security UCS Satellite Database The UCS Satellite Database is a listing of the more than 1000 operational satellites currently in orbit around Earth. The UCS Satellite Database is the only free, comprehensive compilation of active satellites in an easy to manipulate, commonly-used database format. How many satellites does a given country have in orbit, and what are they used for? For example, the database allows a user to determine the relative numbers of military and non-military satellites operated by the United States and other countries, as is illustrated in the figure below. Based on data from 5-1-11 database Or, the user can determine at what altitudes most satellites orbit: Based on data from 7-1-10 database or what types of activities satellites are used for: Get Involved

iBangle puts the iPod on the wrist by Mark R When it comes to iPods and other MP3 players, not much has changed about them in the past few years. Sure, the memory is getting better all the time, but the design is the same: they clip on the belt and the obligatory wired earplugs. This iBangle design concept is a little bit daring as the design fits right on your wrist instead of clipping to your belt. As for the earphones, forget about it! Now, if only it had a way to play video files. Too bad this iBangle remains only a concept from designer Gopinath Prasana. Source Wireless Earbuds For iPod If you are looking for wireless earbuds for your iPod maybe this article will make you decide which earbuds are good for you. This wireless earduds are perfect if you want to run in a park or any other sport activates because you can listen to your favorite music without cord or wires. <-300x250 Medium Rectangle - center-> If you are looking for wireless earbuds you should know that there are 2 types: the ones that connect directly to your iPod and the ones that connect to your iPod through an iPod adapter. Most of the wireless earbuds for iPod use the Bluetooth protocol to connect to your iPod and some of them use other wireless protocol. The fist wireless earbuds we are going to present are the Sennheiser MX W1 Totally Wireless Earphones. This earbuds donâ€™t connect directly to your iPod and they come with a small transmitter that connects to your player. You can find the Sennheiser MX W1 Totally Wireless Earphones on amazon.com at a price of $499.95.