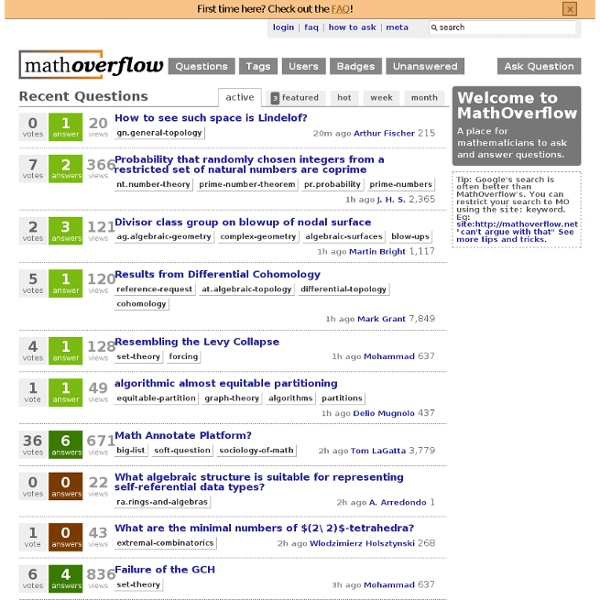 A Physics Booklist [Physics FAQ] - [Copyright] Updated 2005. Updated 1994—1997 by SIC, PEG. Original by Vijay Fafat. Factorization of Quadratic Expressions with Negative Coefficients ( Read ) What if you had a quadratic expression like or in which some or all the coefficients were negative? How could you factor that expression? After completing this Concept, you'll be able to factor quadratic expressions like these for various negative coefficient values. Watch This

Yuri Manin - Science Lives - Simons Foundation Yuri I. Manin’s richly diverse body of work justifies the term “Universal Mathematician.” In an academic landscape defined by discrete specialties, this work, as mathematics, philosophy or commentary, defies compartmentalization. The Published Data of Robert Munafo at MROB xkcd readers: RIES page is here Other pages of perhaps lesser interest: Abbreviations : Common phrases that are frequently made obscure by abbreviation. Alternative Number Systems : A list of the most popular alternatives to fixed-point (integer) and floating-point representations, and the advantages and disadvantages of each. Answers to Questions on Stack Exchange Sites : This page is necessary because the "StackExchange" forums (such as stack overflow) present severe limits on participation, except to a tiny fraction of lucky users who got involved when each forum was new. Apple II Colors : An exact calculation of the RGB values of the lores (COLOR=) and hires (HCOLOR=) colors on the Apple ][, derived by converting through the Y R-Y B-Y and YUV systems.

Gowers's Weblog A few analysis resources March 12, 2014 This will be my final post associated with the Analysis I course, for which the last lecture was yesterday. It’s possible that I’ll write further relevant posts in the nearish future, but it’s also possible that I won’t. This one is a short one to draw attention to other material that can be found on the web that may help you to learn the course material. It will be an incomplete list: further suggestions would be welcome in the comments below. Quaternion group where 1 is the identity element and −1 commutes with the other elements of the group. Cayley graph[edit] The Q8 group has the same order as the Dihedral group, D4, but a different structure, as shown by their Cayley graphs: Cayley table[edit] The Cayley table (multiplication table) for Q is given by:[1] The multiplication of pairs of elements from the subset {±i, ±j, ±k} works like the cross product of unit vectors in three-dimensional Euclidean space.

Graphing Calculator Untitled Graph Create AccountorSign In π K-MODDL > Tutorials > Reuleaux Triangle If an enormously heavy object has to be moved from one spot to another, it may not be practical to move it on wheels. Instead the object is placed on a flat platform that in turn rests on cylindrical rollers (Figure 1). As the platform is pushed forward, the rollers left behind are picked up and put down in front. An object moved this way over a flat horizontal surface does not bob up and down as it rolls along.

Computation - Operations Management/Industrial Engineering The materials discussed on these pages are strongly related to PERT (Project Evaluation and Review Technique) and CPM (Critical Path Method), two methods developed in the 1950's for controlling complex projects. Since the computer age was just beginning, some of the approximations used for the analysis were necessary simplifications and the methods were primarily implemented by hand or with batch runs on main-frame computers. Although computer technology has made the methods much more efficient and accessible, some of the approximations remain. This add-in implements of the methods of project management using Excel. An important advance is that the analysis is mostly dynamic in the sense that changes in the data are reflected immediately on the results.