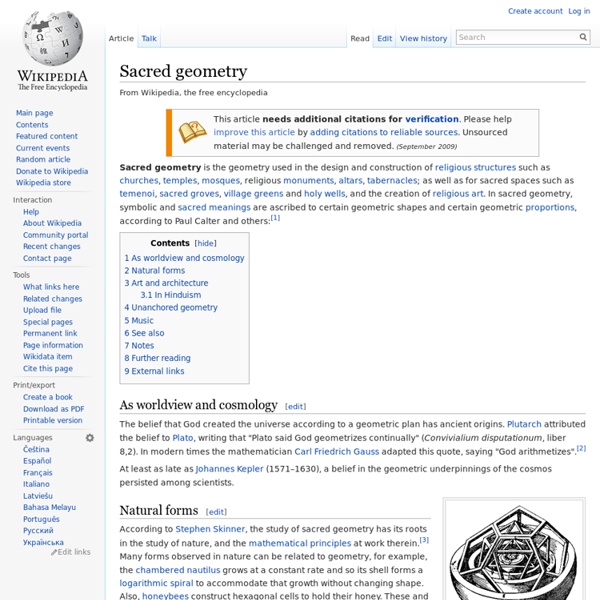 As worldview and cosmology[edit] The belief that God created the universe according to a geometric plan has ancient origins. Plutarch attributed the belief to Plato, writing that "Plato said God geometrizes continually" (Convivialium disputationum, liber 8,2). In modern times the mathematician Carl Friedrich Gauss adapted this quote, saying "God arithmetizes".[2] At least as late as Johannes Kepler (1571–1630), a belief in the geometric underpinnings of the cosmos persisted among scientists. Closeup of inner section of the Kepler's Platonic solid model of planetary spacing in the Solar system from Mysterium Cosmographicum (1596) which ultimately proved to be inaccurate Natural forms[edit] Art and architecture[edit] Geometric ratios, and geometric figures were often employed in the design of Egyptian, ancient Indian, Greek and Roman architecture. In Hinduism[edit] Unanchored geometry[edit] Music[edit] See also[edit] Notes[edit] Further reading[edit] External links[edit] Sacred geometry at DMOZ

Sacred mysteries Wrisberg epitaph in Hildesheim Cathedral, showing distribution of the divine graces by means of the church and the sacraments, or mysteries. By Johannes Hopffe 1585. The term sacred mysteries generally denotes the area of supernatural phenomena associated with a divinity or a religious ideology. The term has two senses, which often overlap: Religious beliefs, rituals or practices which are kept secret from non-believers, or lower levels of believers, who have not had an initiation into the higher levels of belief (the concealed knowledge may be called esoteric).Beliefs of the religion which are public knowledge but cannot be explained by normal rational or scientific means. Although the term "mystery" is not often used in anthropology, access by initiation or rite of passage to otherwise secret beliefs is an extremely common feature of indigenous religions all over the world. Pre-Christian religious mysteries[edit] Christian mysteries[edit] Eastern Orthodoxy[edit] Other religions[edit]

Logarithmic spiral A logarithmic spiral, equiangular spiral or growth spiral is a self-similar spiral curve which often appears in nature. The logarithmic spiral was first described by Descartes and later extensively investigated by Jacob Bernoulli, who called it Spira mirabilis, "the marvelous spiral". Definition[edit] In polar coordinates the logarithmic curve can be written as[1] or with being the base of natural logarithms, and and being arbitrary positive real constants. In parametric form, the curve is with real numbers The spiral has the property that the angle between the tangent and radial line at the point is constant. The derivative of is proportional to the parameter . ) the spiral becomes a circle of radius . approaches infinity ( → 0) the spiral tends toward a straight half-line. is called the pitch. Spira mirabilis and Jacob Bernoulli[edit] Spira mirabilis, Latin for "miraculous spiral", is another name for the logarithmic spiral. Properties[edit] Starting at a point goes toward is finite. , where to the origin.

Visionary Art, Contemporary Sacred Art, Outsider Art | Lila Sacred bull Stone Age[edit] Aurochs are depicted in many Paleolithic European cave paintings such as those found at Lascaux and Livernon in France. Their life force may have been thought to have magical qualities, for early carvings of the aurochs have also been found. The impressive and dangerous aurochs survived into the Iron Age in Anatolia and the Near East and was worshipped throughout that area as a sacred animal; the earliest survivals of a bull cult are at neolithic Çatalhöyük. Bronze Age[edit] Mesopotamia[edit] The Sumerian Epic of Gilgamesh depicts the killing by Gilgamesh and Enkidu of the Bull of Heaven, Gugalana, first husband of Ereshkigal, as an act of defiance of the gods. Egypt[edit] Eastern Anatolia[edit] Crete[edit] The Bull was a central theme in the Minoan civilization, with bull heads and bull horns used as symbols in the Knossos palace. Indus Valley[edit] Cyprus[edit] In Cyprus, bull masks made from real skulls were worn in rites. Levant[edit] Hellas[edit] Eucharist analogies[edit]

MusicandSacredGeometry Music is composed of sounds and sounds come from vibrations, and vibrations are deteremined by the lengths of strings, or wavelengths in air, that translates into cycles per second which gives us different notes. In the process of going from One to Two, a Circle with a diameter length has a single vibration, but when another Circle is added interesecting it in its center, a Vesica Pisces is formed. This is the area that it shares which looks like the female generative organ, and from where in sacred geometry all things come from. It is part of the reproductive creative process of the Lord (SEE Golden Section Class). ....For this is how the Lord multiplication and reproduction came about from One to Many Vibrations that we see and feel and hear. and yet all are in tune with the One Originator, who is the LORD, the One God. (SEE Sexual Mysteries Board ) But what makes them all sound in tune when played together ... In My Opinion David Jay Jordan

Magnum opus (alchemy) Colors of the magnum opus seen on the breastplate of a figure from Splendor Solis The Great Work (Latin: Magnum opus) is an alchemical term for the process of creating the philosopher's stone. It has been used to describe personal and spiritual transmutation in the Hermetic tradition, attached to laboratory processes and chemical color changes, used as a model for the individuation process, and as a device in art and literature. The origin of these four phases can be traced at least as far back as the first century. The magnum opus had a variety of alchemical symbols attached to it. Alchemical authors sometimes elaborated on the three or four color model by enumerating a variety of chemical steps to be performed. In another example from the sixteenth century, Samuel Norton gives the following fourteen stages:[9] Some alchemists also circulated steps for the creation of practical medicines and substances, that have little to do with the magnum opus.

Phi Use as a symbol The lower-case letter φ (or often its variant, ϕ) is often used to represent the following: The upper-case letter Φ is used as a symbol for: The golden ratio conjugate −0.618... in mathematics.The magnetic flux and electric flux in physics, with subscripts distinguishing the two.The cumulative distribution function of the normal distribution in mathematics and statistics.In philosophy, Φ is often used as shorthand for a generic act. (Also in lower-case.)[citation needed]The number of phases in a power system in electrical engineering, for example 1Φ for single phase, 3Φ for three phase.A common symbol for the parametrization of a surface in vector calculus.In Lacanian algebra, Φ stands for the imaginary phallus and also represents phallic signification; -Φ stands in for castration.[3] The diameter symbol in engineering, ⌀, is often incorrectly[citation needed] referred to as "phi". Computing In Unicode, there are multiple forms of the phi letter: at U+03D5.[4] ), \phi (

Invocation An invocation (from the Latin verb invocare "to call on, invoke, to give") may take the form of: These forms are described below, but are not mutually exclusive. See also Theurgy. Supplication or prayer[edit] As a supplication or prayer it implies to call upon God, a god or goddess, a person, etc. As alternative to prayer[edit] An invocation can also be a secular alternative to a prayer. In this usage, it is comparable to an affirmation as an alternative for those who conscientiously object to taking oaths of any kind, be it for reasons of belief or non-belief. A form of possession[edit] The word "possession" is used here in its neutral form to mean "a state (potentially psychological) in which an individual's normal personality is replaced by another". To "invoke" is to "call in", just as to "evoke" is to "call forth". A woman splashed sand into her eyes, a man cut his belly with shards of glass but did not bleed, another swallowed fire. Command or conjuration[edit] References[edit]

SacredGeometry Photo Album - tribe.net tribes » Religion & Beliefs » SacredGeometry » photos Subscribe to this album Advertisement Recent topics in "SacredGeometry" ^ top of page | view all topics | back to SacredGeometry » home | about | why join? Copyright © 2014 Utah Street Networks, Inc. Indigo children Indigo children, according to a pseudoscientific New Age concept, are children who are believed to possess special, unusual and sometimes supernatural traits or abilities.[4] The idea is based on concepts developed in the 1970s by Nancy Ann Tappe[5] and further developed by Jan Tober and Lee Carroll. The concept of indigo children gained popular interest with the publication of a series of books in the late 1990s and the release of several films in the following decade. A variety of books, conferences and related materials have been created surrounding belief in the idea of indigo children and their nature and abilities. The interpretations of these beliefs range from their being the next stage in human evolution, in some cases possessing paranormal abilities such as telepathy, to the belief that they are more empathetic and creative than their peers. Origins[edit] Sarah W. Claimed characteristics[edit] Descriptions of indigo children include: Other alleged traits include:[8][10]

Left-hand path and right-hand path The Baphomet, from Eliphas Levi's "Dogme et Rituel de la Haute Magie", 1854, adopted symbol of some "Left-Hand Path" belief systems. The terms Left-Hand Path and Right-Hand Path refer to a dichotomy between two opposing approaches found in Western esotericism, which itself covers various groups involved in the occult and ceremonial magic. In some definitions, the Left-Hand Path is equated with malicious Black magic and the Right-Hand Path with benevolent White magic.[1]:152 Other occultists have criticised this definition, believing that the Left-Right dichotomy refers merely to different kinds of working, and does not necessarily connote good or bad magical actions.[1]:176 Terminology[edit] There is no set accepted definition of what comprises the Left-Hand Path and what comprises the Right. Early proponents of the terms, such as Madame Blavatsky, believed that they were essentially conflatable with Black Magic and White, although some later occultists have criticized this notion.