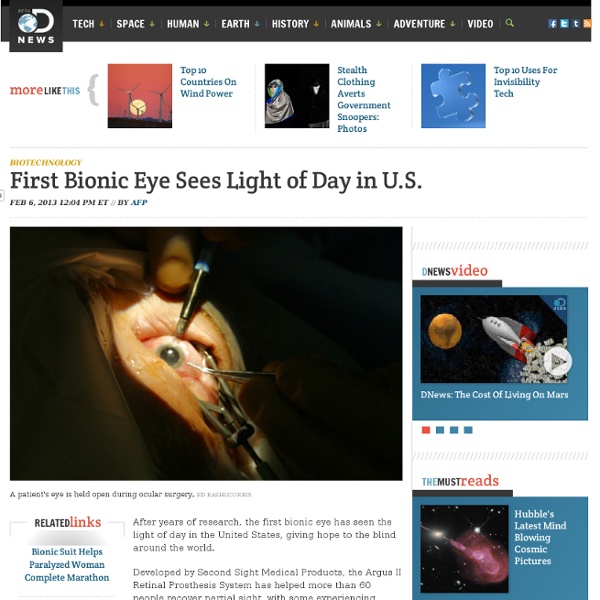 After years of research, the first bionic eye has seen the light of day in the United States, giving hope to the blind around the world. Developed by Second Sight Medical Products, the Argus II Retinal Prosthesis System has helped more than 60 people recover partial sight, with some experiencing better results than others. Consisting of 60 electrodes implanted in the retina and glasses fitted with a special mini camera, Argus II has already won the approval of European regulators. PHOTOS: Mechanimals: Animals Fitted With Prosthetics "It's the first bionic eye to go on the market in the world, the first in Europe and the first one in the U.S.," said Brian Mech, the California-based company's vice president of business development. Those to benefit from Argus II are people with retinitis pigmentosa, a rare genetic disease, affecting about 100,000 people in the U.S., that results in the degeneration of the retinal photoreceptors. VIDEO: Man Controls Robotic Hand with His Mind Related:  Robotica • Future Of... • Bionic Healing

Real Life Japanese Mech Robot Fires BBs With A Smile The Kuratas Mecha robot is an art/aspirational nerd project by Suidobashi Heavy Industry. This full-sized Mech robot features a ride-in cockpit, “rocket” launchers, and a “smile controlled” BB Gatling gun. That’s right: when you smile, this thing unleashes thousands of tiny plastic BBs. Unveiled at Wonder Fest 2012 in Tokyo, you can control the robot with either a set of master-slave joysticks or using a more fluid Kinect interface. You can “price out” your own Mech here but rest-assured you won’t be able to drive one of these off the lot any time soon. There are some who are suggesting this is CG but considering the AFP/Getty picked up some photos of it, it looks about as real as you can get. via plasticpals

DNA Stores MLK's Speech, Shakespeare's Sonnets Next, they sent the genetic instruction to the biological lab Agilent Technologies in California. Agilent constructed pieced together DNA strands made of the bases, according to Goldman and Birney's instructions. Then, the lab shipped the scientists a tiny vial. The vial contained a long string of DNA encoded with the sonnets, the speech, the photo and the research paper. To read the information, the scientists used a machine designed to analysis, or sequence, DNA molecules. One of the methods it used was similar to how ordinary computers pieces together a digital data that comes from disparate locations on a hard drive. While this work is proof-of-concept, it doesn't mean that people will be seeing DNA-based backup drives on desktops soon. But it is still expensive: Goldman noted that commercial rates for synthesizing the DNA are between $10,000 and $20,000. Goldman noted that both his and Church's labs were working on the idea at the same time, without knowledge of each other.

A Middle-Ear Microphone To hear a regular recording of the start of Beethoven’s Ninth Symphony, click here. To hear the start of Beethoven’s Ninth Symphony, recorded through a new microphone in the middle ear of a cadaver, click here. April 30, 2012 – Cochlear implants have restored basic hearing to some 220,000 deaf people, yet a microphone and related electronics must be worn outside the head, raising reliability issues, preventing patients from swimming and creating social stigma. Now, a University of Utah engineer and colleagues in Ohio have developed a tiny prototype microphone that can be implanted in the middle ear to avoid such problems. The proof-of-concept device has been successfully tested in the ear canals of four cadavers, the researchers report in a study just published online in the Institute of Electrical and Electronics Engineers journal Transactions on Biomedical Engineering. The study was funded by the National Institutes of Health (NIH-DC-006850). Testing the Microphone in Cadavers

Scientists Have Created Crystals That Are Almost Alive Fighting Disease by Growing New Tissues For most of us, minor wounds are just an inconvenience. We endure the minor pain of a cut or scrape, stick on a bandage, and within a week, our skin looks like nothing ever happened. In some cases, though, healing isn’t so simple. Somewhere along the way, the complex chain of events that lets the body repair itself breaks down, and a wound remains open, raw. “For these foot ulcers, there are a variety of therapies, but they are only successful in roughly half the cases, and [the ulcers] have a high recurrence rate,” says Jonathan Garlick, head of the Division of Cancer Biology and Tissue Engineering at Tufts School of Dental Medicine. Garlick’s research could one day help patients avoid that kind of traumatic outcome. “What’s really special about the epigenome is that it gives cells the ability to regulate which genes are expressed, without altering information stored in the DNA itself.” Garlick’s research, however, might allow scientists to sidestep these moral conundrums.

Justin - Humanoid Robot Catches with Two Hands German researchers developed a robot that can perform complex tasks such as catching a ball in mid flight. The new robot called “Justin” is described as a two-arm-system for investigation of two handed manipulation. The development of humanoid robots has made significant progress in recent years. Although several systems have impressive walking abilities, when it comes to their abilities to manipulate objects or interact with their surrounding they are quite limited. To overcome this limitation, researchers from the German Aerospace Center (DLR) Institute of Robotics and Mathematics developed a human-like torso with two arms and two hands. Justin is used to test programming and control concepts for two-handed mobile manipulation, and in a recent demonstration was able to show impressive abilities including catching two balls in mid air just like a skilled human would do. The researchers see the future of humanoid robots in household assistance as well as in space environments.

How to turn living cells into computers Ref. 1 Synthetic DNA can perform logic operations such as “NAND” and give out the answer by lighting up the cell with green fluorescent protein, or GFP. Synthetic biologists have developed DNA modules that perform logic operations in living cells. These ‘genetic circuits’ could be used to track key moments in a cell’s life or, at the flick of a chemical switch, change a cell’s fate, the researchers say. Their results are described this week in Nature Biotechnology1. Synthetic biology seeks to bring concepts from electronic engineering to cell biology, treating gene functions as components in a circuit. “These developments will more readily enable one to create programmable cells with decision-making capabilities for a variety of applications,” says James Collins, a synthetic biologist at Boston University in Massachusetts who was not involved in the study. Collins developed the genetic ‘toggle switch’ that helped to kick-start the field of synthetic biology more than a decade ago2.

Nobel prize won by Briton written off in his teens by a science teacher | Science A British researcher whose schoolboy ambition to become a scientist was dismissed as "quite ridiculous" by his Eton schoolmaster has won a Nobel prize for work that proved adult cells can be reprogramed and grown into different tissues in the body. Sir John Gurdon, 79, of Cambridge University, shares the prize in physiology or medicine - and 8m Swedish kronor (£744,000) cash - with the Japanese scientist Shinya Yamanaka, 50, who holds academic posts at the Universities of Kyoto and San Francisco. The groundbreaking work has given scientists fresh insights into how cells and organisms develop, and may pave the way for radical advances in medicine that allow damaged or diseased tissues to be regenerated in the lab, or even inside patients' bodies. Gurdon heard he might have won science's highest honour from a journalist on an Italian newspaper who called his lab at 7.30am on Monday morning, before the announcement had been made. "I feel rather strongly about that.