5 Great Resources To Learn How To Code 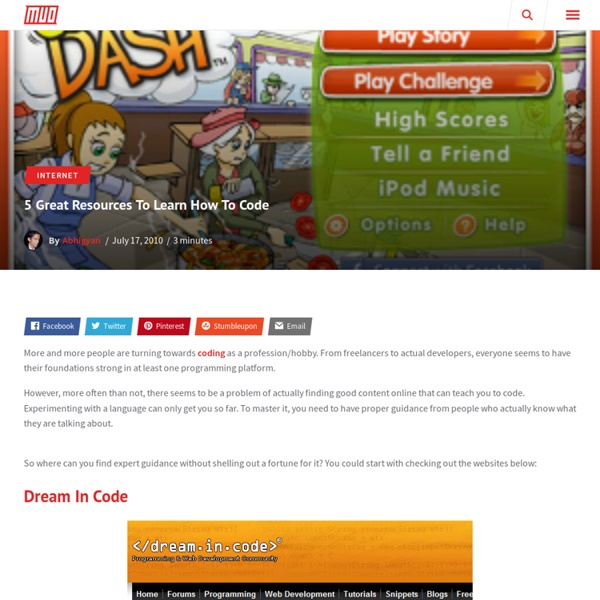 However, more often than not, there seems to be a problem of actually finding good content online that can teach you to code. Experimenting with a language can only get you so far. To master it, you need to have proper guidance from people who actually know what they are talking about. So where can you find expert guidance without shelling out a fortune for it? You could start with checking out the websites below: Dream In Code Just taking a look at their logo ought to tell you that the community at Dream In Code isn’t something to mess around with. They have everything. They also have a video channel and links to developers’ blogs if you want to look deeper. W3Schools If what you want to master is a Web technology, you’ve got to give W3Schools a look. You can get tutorials ranging from plain-Jane HTML, right up to AJAX and the likes. Eloquent JavaScript If you’ve ever had to use a Greasemonkey Script or a Bookmarklet, you have a clue about the kind of power that JavaScript possesses.

CWE - 2011 CWE/SANS Top 25 Most Dangerous Software Errors Summary Discussion Salt might not be good for your diet, but it can be good for your password security. Instead of storing passwords in plain text, a common practice is to apply a one-way hash, which effectively randomizes the output and can make it more difficult if (or when?) 4 Free Ways to Learn to Code Online The Web Development Series is supported by Rackspace, the better way to do hosting. Learn more about Rackspace's hosting solutions here. Learning to code is something every tech-minded person should try at least once — and the wealth of online courses, many of which are free or surprisingly inexpensive, make learning about programming easier than ever. If you're thinking of picking up C++, Ruby on Rails, Python or Java, these online options might be a good way to test the waters of programming before you fully invest your time and money in formal training or certifications.

Learning How to Code Has Never Been Easier - Inspiredology Programming isn’t just a niche specialization anymore, rather a necessity for tech-professionals regardless of the industry in which they work. Thankfully for them, it couldn’t be any easier.As such, there’s a big push lately to make coding literacy more widespread among the general populace. Even Mayor Bloomberg is getting in on the act, pledging to learn basic coding in 2012 as his New Year’s resolution. For those who want to learn to code, there are a number of online school coding programs that can guide them through the process.

Invent Your Own Computer Games with Python - Chapters Chapter 1 Read online: Chapter 1 - Installing Python Videos: Open source programming tools on the rise If the open source model has a sweet spot, it's in programming tools. Linus Torvalds's fabled "world domination" on the desktops of clerks or CEOs may never arrive, but it's already here on the computers of programmers everywhere. Even in the deepest corners of proprietary stacks, open source tools can be found, often dominating. The reason is clear: Open source licenses are designed to allow users to revise, fix, and extend their code. Free HTML Tutorial - Learning to Code HTML Home >> Building Your Website Customizable HTML / CSS Web Templates Download these HTML / CSS templates and learn how to edit them to fit your needs.

Learn to Code « Heterogenous Mixture A lot of people have asked me for advice on learning to code. What should I learn first? How long will it take? How can I get a job as a programmer? The answer to most of these questions is “it depends.” Learn PHP - PHP Tutorial - Learn PHP Code PHP can be a powerful tool on your web site and learning it isn't as hard as you might think. Using our informative tutorials, even a beginner with no programming experience can start learning PHP and putting it to use right away. Learn PHP in 8 WeeksIn just a few minutes ever week, you can learn all the basics of PHP. This course is broken down into eight short lessons. In just eight weeks you will have a firm grasp of all the basic PHP concepts. How to use Arrays in PHPHow to setup and access an array and it's elements using PHP.

IEEE 802.11 IEEE 802.11 is a set of media access control (MAC) and physical layer (PHY) specifications for implementing wireless local area network (WLAN) computer communication in the 2.4, 3.6, 5 and 60 GHz frequency bands. They are created and maintained by the IEEE LAN/MAN Standards Committee (IEEE 802). The base version of the standard was released in 1997 and has had subsequent amendments. The standard and amendments provide the basis for wireless network products using the Wi-Fi brand. While each amendment is officially revoked when it is incorporated in the latest version of the standard, the corporate world tends to market to the revisions because they concisely denote capabilities of their products. As a result, in the market place, each revision tends to become its own standard. Lots of options for getting students into computer programming Mathew Kennedy started programming with LegoMindstorm when he was 8. Now, at age 15, he creates games and applications for phones and computer systems. His father, William Kennedy, applauds the hobby and wishes all kids could be exposed to programming. "It's fun," said Kennedy, who has hired hundreds of software engineers at Microsoft, "and it will be more and more important in the job market as these kids grow up." Until computer programming becomes standard curriculum at middle and high schools though, families can turn to the Web for free resources and programming games for students.