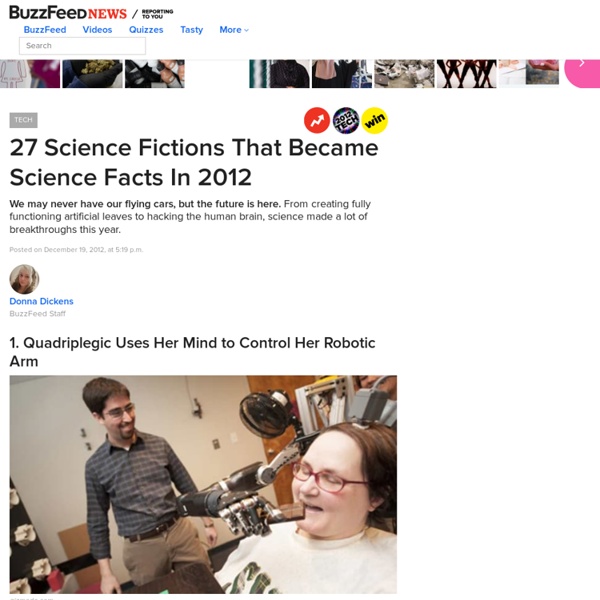 Print - 110 Predictions For the Next 110 Years · People will be fluent in every language. With DARPA and Google racing to perfect instant translation, it won't be long until your cellphone speaks Swahili on your behalf. · Software will predict traffic jams before they occur. Using archived data, roadside sensors, and GPS, IBM has come up with a modeling program that anticipates bumper-to-bumper congestion a full hour before it begins. Better yet, the idea proved successful in early tests—even on the Jersey Turnpike. · Climate-controlled jackets will protect soldiers from extreme heat and cold. · Nanoparticles will make chemotherapy far more effective. · Electric cars will roam (some) highways. · Athletes will employ robotic trainers. · Bridges will repair themselves with self-healing concrete. · Digital "ants" will protect the U.S. power grid from cyber attacks. · Scrolls will replace tablets. Your Car Will Be Truly Connected · Your genome will be sequenced before you are born. 10 Things That Will Remain the Same

No rain for decades: Stand by for the ‘megadroughts’, scientists warn - Climate Change - Environment Experts warn the droughts could be even more severe than the prolonged water shortage currently afflicting California, where residents have resorted to stealing from fire hydrants amid mass crop failures and regular wildfires. Megadroughts – which are generally defined as lasting 35 years or more – will become considerably more frequent as global warming increases temperatures and reduces rainfall in regions already susceptible, warns Cornell University’s Dr Toby Ault, the author of the new report. Megadroughts are also likely to be hotter and last longer than in the past, he claimed. His peer-reviewed research – to be published in the American Meterological Society’s Journal of Climate – is the first to scientifically establish that climate change exacerbates the threat. Loading gallery In pictures: Changing climate around the world 1 of 15 “We can now explicitly add megadroughts to the list of risks that are being intensified by climate change. Video: The truth about global water shortages

Jetpack Will Help Runners Hit 4-Minute Miles There are times when seconds count, and the ability to move quickly could mean the difference between life and death. In combat, soldiers can carry upwards of 90 pounds in their rucksacks and on their bodies, which significantly reduces how fast they can move on foot. Jason Kerestes, a student at Arizona State University, has developed the 4 Minute Mile: a jetpack that helps soldiers move faster, without requiring them to physically exert more. While jetpacks are usually associated with flying around, this one just gives the runner a boost, helping them to shave off time while also decreasing the amount of effort put into the activity. Initial testing has shown that even while loaded up with the jetpack equipment, the runner was able to complete a 200-meter run faster and with decreased metabolic cost than when he ran on his own. This project was completed in ASU’s iProjects program, which hooks students up with faculty and partners in the industry to help solve real problems.

50 Things About Millennials That Make Corporate America Sh*t Its Pants In 2013, Joel Stein deemed Millennials the “ME Generation.” The TIME contributor called Generation-Y selfish, egotistical and lazy. He also noted, however, that we may just be the generation that will save us all. Per usual, no one knows what to make of us. Our parents scorn us, then praise us. Our generation is an anomaly. We refuse to accept that life must be dictated by a job we hate. We refuse to adhere to work schedules that don’t work. We’re not going to hand our souls over to men in suits or women in pencil skirts. We’re going to innovate. Like that girl you can’t understand, Corporate America has gone from scorning us to fearing us. They don’t understand why we’re not lining up after college for a spot on their factory lines. They don’t understand why we’re not chasing them with our legs spread. We gave you a shot, tried you out and decided you weren’t for us. Much like why our generation is full of more singles than any before, we’re just not willing to settle. 1. 2. 3. 4. 5.

We can restore cognition by manipulating where the body meets the mind When we age our whole body gradually deteriorates. This includes our brains, where our personality, memories and personal values reside. It is therefore understandable that dementia and memory loss are some of the most devastating hallmarks of ageing, for the elderly, their families, and the healthcare system. This is why researchers want to find ways to rejuvenate the brain and therefore maintain the young mind and cognition in old age. Throughout our life, immune cells that circulate in the blood help maintain our bodies, yet the brain, structurally secluded from the circulation by an impermeable blood-brain barrier, was for years considered to be an organ which ideally operates autonomously. Click to enlarge However, work by our group has focused on a part of the brain called the choroid plexus. From previous work we know that the choroid plexus enables communication between the brain and immune cells present in the blood. The ageing brain signature Memory testing

Phys.Org Mobile: What does the next generation telescope need to detect life? Almost 2,000 extrasolar planets have been discovered to date and this number is constantly increasing. Yet, we still know little about these alien worlds, especially their atmospheres. The atmospheres of terrestrial exoplanets could betray the presence of life on the planet, sparking NASA's interest in acquiring the spectra that appears as starlight shines through these planetary atmospheres. A paper by Timothy Brandt and David Spiegel, exo-planetary scientists at the Institute for Advanced Study, Princeton, details what is needed in a next generation telescope for it to be capable of detecting signatures of life in the atmospheres of alien planets. The paper has been published in the September issue of the journal Proceedings of the National Academy of Sciences. Signatures of a habitable planet Astronomers employ several different methods to study the atmospheres of gas giants that orbit close to their host stars. Also, it should be cautioned that oxygen can be produced abiotically.

How Does the IPCC Know Climate Change is Happening? Climate change is one of the few scientific theories that makes us examine the whole basis of modern society. It is a challenge that has politicians arguing, sets nations against each other, queries individual lifestyle choices, and ultimately asks questions about humanity’s relationship with the rest of the planet. The Intergovernmental Panel on Climate Change published its synthesis report on November 2, a document that brings together the findings from the IPCC’s three main working groups. It reiterates that the evidence for climate change is unequivocal, with evidence for a significant rise in global temperatures and sea level over the last hundred years. It also stresses that we control the future and the magnitude of shifting weather patterns and more extreme climate events depends on how much greenhouse gas we emit. Causes of climate change Greenhouse gases absorb and re-emit some of the heat radiation given off by the Earth’s surface and warm the lower atmosphere. Future changes

How Mold on Space Station Flowers is Helping Get Us to Mars Mars has held a central place in human imagination and culture for millennia. Ancients marveled at its red color and the brightness that waxed and waned in cycles over the years. Early observations through telescopes led some to speculate that the planet was covered with canals that its inhabitants used for transportation and commerce. In “The War of the Worlds”, the writer H.G. Wells posited a Martian culture that would attempt to conquer Earth. The real story of humans and Mars is a little more prosaic but no less fascinating. The fascination hasn’t waned, even in the Internet Age. “The Martian” merges the fictional and factual narratives about Mars, building upon the work NASA and others have done exploring Mars and moving it forward into the 2030s, when NASA astronauts are regularly traveling to Mars and living on the surface to explore. Habitat On the surface of Mars, Watney spends a significant amount of time in the habitation module -- the Hab -- his home away from home. Rover

The Physics of Interstellar Travel To one day, reach the stars. When discussing the possibility of interstellar travel, there is something called “the giggle factor.” Some scientists tend to scoff at the idea of interstellar travel because of the enormous distances that separate the stars. According to Special Relativity (1905), no usable information can travel faster than light locally, and hence it would take centuries to millennia for an extra-terrestrial civilization to travel between the stars. Similarly, investigations into UFO’s that may originate from another planet are sometimes the “third rail” of someone’s scientific career. But to an astronomer, the existence of intelligent life in the universe is a compelling idea by itself, in which extra-terrestrial beings may exist on other stars who are centuries to millennia more advanced than ours. So far, we see no hard evidence of signals from extra-terrestrial civilizations from any earth-like planet. Type 0 Type I Ram-jet fusion enginesPhotonic drive Type II Type III