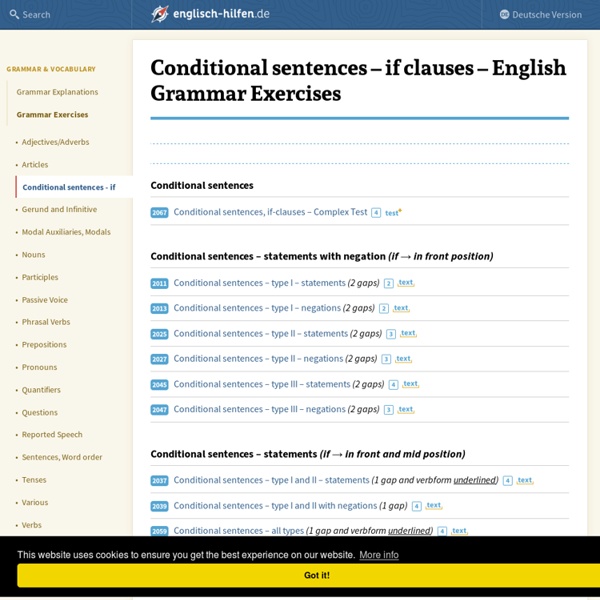 Wanna learn English?: Conditional Sentences. Part 2: Unreal Conditionals. If I were a rich man... A conditional sentence describes a condition that is necessary for a particular result to occur. If the weather is fine this weekend, I´ll go skiing. I.e. I´ll go skiing on condition that the weather is fine this weekend. There are different types of conditional sentences depending on the meaning we intend to convey. Active / Passive Verb Forms Sentences can be active or passive. Therefore, tenses also have "active forms" and "passive forms." You must learn to recognize the difference to successfully speak English. Active Form

Mixed conditional - exercises 1.Wstaw odpowiednią formę czasownika. 1.If you .............(study) harder in the past, you...........(have) better job now.2.If my mother...............(not/have) operation two years ago, she .......... Wanna learn English?: Conditional Sentences. Part 1 Conditional sentences are a grammar issue which students of English must strive to learn due to their complexity, on the one hand, and their practicality, on the other hand. They are complex sentences formed by a main clause and a subordinate clause. The subordinate clause states a condition and the main clause states a consequence, and the idea is that given the condition, the consequence will take place. Although "if" is the most usual conjunction used in conditional sentences, there are others which also occur, such as "whether" "unless", "provided that", "as long as", "on condition that", etc. In this first post regarding conditionals, only zero conditionals and first conditionals are dealt with. Second and third conditionals will shortly be attended to.

Simple Present vs. Present Progressive Exercises and tests Form See also explanations on Simple Present and Present Progressive Use In general or right now? Do you want to express that something happens in general or that something is happening right now? Conditional Exercise 10 1.a. She will take care of the children for us next weekend because her business trip was canceled. 1.b. But, she (take, not) would not be taking care of the children for us next weekend if her business trip (be, not) had not been canceled. 2.a. Tom is not going to come to dinner tomorrow because you insulted him yesterday.2.b. Relative Clauses Content How to form relative clauses Level: lower intermediate Relative pronouns Level: lower intermediate Random Idea English: Negative inversion - practice exercises Here are some exercises on negative inversion, as promised rather a long time ago. Two warm-up exercises to remind you of the principles Click and Drop - where you see this symbol ? mouse over it for instructions