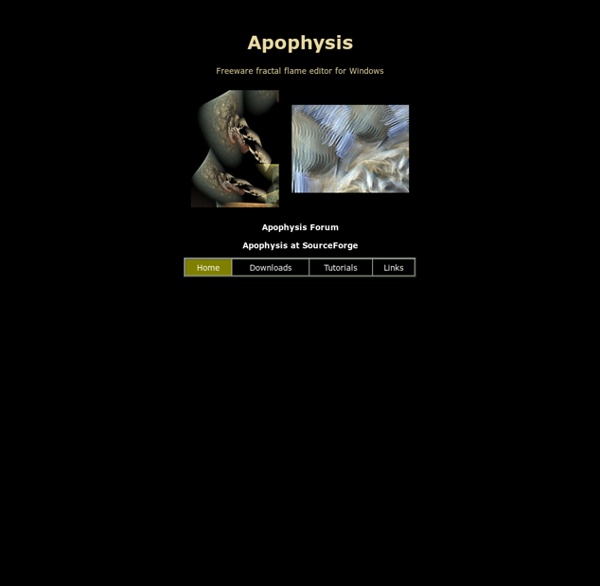 Fibonacci Spiral Generator The Natural Intelligence Custom Fibonacci Spiral Generator allows the user to create his or her own large Fibonacci spiral images. Each spiral is based on a small tile image, either from those supplied with the application, or one which the user provides. The CFSG application provides a control console on which the user may vary the settings to produce the final image, including the spectrum shift, brightness change, number of spiral parts, etc. The output file is saved as a .bmp image, which may be further processed using other applications. While creating images with the application, the user may access a Help Screen containing additional information. The sample images below were all created using the CFSG application from the small tile images shown.

Scott Draves First of all I want to thank two incredible people who made possible this amazing Special Post, the well known software artist Scott Draves and as interviewer Phoenix Perry who is curator of Devotion Gallery and a new media artist and performer. So in the interview you can read almost everything about the career of Scott Draves as a visual and software artist. He says how and when started in the fabulous and huge world of programming and also explains some of his projects in the easy way. Navfree Latest Satellite Navigation Software for iPhone, iPad and Android Offline Maps - Better than Online Maps Nearly all mobile devices are constantly connected to the Internet. 3G, Wifi, LTE and 4G have become standards for smartphones. This is great for many applications such as email and web browsing, but for navigation a purely online map can cause problems. Roaming Cost – Online map applications require a constant data connection to download map data, this data is quite large and can quickly generate large phone bills when you are roaming in another country. Navmii and Navfree apps are different, they store all the map data on-board the phone itself, meaning you don’t need to use your Internet connection to navigate saving you money when you are traveling.

Fractal Dimension Matlab Code Edit MATLAB M code in Emacs 1.0 Matlab-emacs Major mode for Emacs for editing MATLAB code, and running MATLAB in an inferior shell. Edit MATLAB M code in Emacs 1.0 License - GNU General Public License (GPL). Fractal flame Fractal flames differ from ordinary iterated function systems in three ways: Nonlinear functions are iterated instead of affine transforms.Log-density display instead of linear or binary (a form of tone mapping)Color by structure (i.e. by the recursive path taken) instead of monochrome or by density. The tone mapping and coloring are designed to display as much of the detail of the fractal as possible, which generally results in a more aesthetically pleasing image. Algorithm[edit] The algorithm consists of two steps: creating a histogram and then rendering the histogram.

Bill Lear William Powell (Bill) Lear (June 26, 1902 – May 14, 1978) was an American inventor and businessman. He is best known for founding the Lear Jet Corporation, a manufacturer of business jets. He also invented the B-battery eliminator and developed the 8-track cartridge, an audio tape system which was widely used in the 1960s and 1970s.[1] Early life[edit] Lear entered Englewood High School but was dismissed for showing up teachers. He worked for the Multigraph Company, running and repairing rotary typesetting and printing machines. Audio slideshow: The art of mathematics To the untrained eye, these vivid images might appear to be random sets of colourful swirls and circles. But they are in fact precise visual representations of mathematical theory known as dynamical systems. Some of the images - created by mathematicians from across the world - have gone on display at the University of Liverpool. Here, mathematician Lasse Rempe explains how they are made - and considers their artistic merits. <table cellspacing="0" cellpadding="0" border="0" width="352" align="center"><tr><td><table cellspacing="1" cellpadding="30" border="0" bgcolor="#cccccc" width="100%" height="33"><tr><td bgcolor="#fafafa"><div class="font-family:Verdana;color:#666666;font-size:11px;"><span style="font-family:Verdana;color:#333333;font-size:18px;font-weight:800;"><strong>Javascript and Flash plug-in required</strong></span><P>Either the Flash plugin was not detected on your computer or the JavaScript features of your brower have been disabled.

Random walk Example of eight random walks in one dimension starting at 0. The plot shows the current position on the line (vertical axis) versus the time steps (horizontal axis). A random walk is a mathematical formalization of a path that consists of a succession of random steps. For example, the path traced by a molecule as it travels in a liquid or a gas, the search path of a foraging animal, the price of a fluctuating stock and the financial status of a gambler can all be modeled as random walks, although they may not be truly random in reality. The term random walk was first introduced by Karl Pearson in 1905.[1] Random walks have been used in many fields: ecology, economics, psychology, computer science, physics, chemistry, and biology.[2][3][4][5][6][7][8][9] Random walks explain the observed behaviors of processes in these fields, and thus serve as a fundamental model for the recorded stochastic activity.