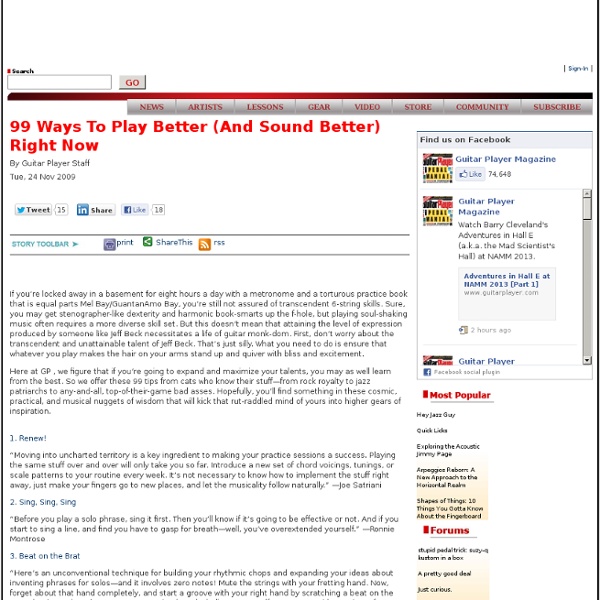 99 Ways To Play Better (And Sound Better) Right Now - See more at: Here at GP , we figure that if you’re going to expand and maximize your talents, you may as well learn from the best. So we offer these 99 tips from cats who know their stuff—from rock royalty to jazz patriarchs to any-and-all, top-of-their-game bad asses. Hopefully, you’ll find something in these cosmic, practical, and musical nuggets of wisdom that will kick that rut-raddled mind of yours into higher gears of inspiration. If you’re locked away in a basement for eight hours a day with a metronome and a torturous practice book that is equal parts Mel Bay/GuantanAmo Bay, you’re still not assured of transcendent 6-string skills. 1. “Moving into uncharted territory is a key ingredient to making your practice sessions a success. 2. “Before you play a solo phrase, sing it first. 3. 4. 5. 6. 7. 8. 9. 10. 11. 12. 13.

10 Beautiful Open Chord Shapes 10 Ways to Play the Most Beautiful Open Chord Shapes Part I A great way to make your chord progressions and songs sound awesome is to use open chord shapes. I always love to use these chords to add some flavor to my chord progressions. When you move an open chord up the neck the name of the chord changes and the chord gets extended with 1 or 2 notes. While you can play barre chords at any fret on the fingerboard, open chords can only be played at certain frets. Because of all the extended chord names I didn’t bother to name every single one of them. It’s all about incorporating these chords into your songs and chord progressions, putting your creativity to the test, experimenting with all the possibilities, replacing some basic chords for these extraordinary ones, learning to hear what sounds right and what feels good. Check out the youtubes Part I, II & III and the corresponding Chord fingerings below. Have a great time! 10 Ways to Play the Most Beautiful Open Chord Shapes Part II

10 Interesting Chords You've Never Used Blog Published on September 28th, 2011 | by Caesar (ENGAGE) If you’re like me and likes experimenting with their music, You’re going to like this one! All of these chords are movable so why not give them a try and see how you can use them in your next song 1. Minor 9 The minor 9 chord adds the 9th interval onto a minor 7 chord. The notes that make up this chord are, in order, b7, b3, 5, and 9. 2. This chord is similar to the minor 9–it adds the 9th interval onto a major 7 chord. That shape has the 1, 3, 7, and 9 intervals of the chord. 3. Many guitarists are familiar with the A and E shape barre chords for the dominant 7 chord. Fret this shape starting with the fouth finger, followed by the second, third, and first, in order. 4. Flattening the 5th interval on a dominant chord adds more tension. You can see the 5th (the bottom note) is lowered one fret. 5. Add a sharp 9th interval to the dominant 7 chord to make this cool-sounding chord which Jimi Hendrix loved to use. 6. 7. 8. 9. 10.

Guitars, Musical Instruments, and Musical Equipment from Guitar Center Products Even Fender likes to throw away the rulebook. With their unique circuitry, eccentric cosmetics and undeniable character, Modern Original amplifiers are constructed with the tonal explorer in mind. By breaking away from traditional features and tapping into imagination, Modern Originals redefine what a “Fender amplifier” can be. Fender Pawn Shop Special Excelsior™ Fender® Pawn Shop Special Greta™ Demo Young the Giant Formerly known as the Jakes, Young the Giant began making eclectic indie rock in Irvine, CA, where bandmates… More...

5 Beautiful Ways to Play A II-V-I Chord Progression The Chord Guide: Pt I – Chord Progressions Chord progressions are the canvas on which musicians paint their masterpieces, and it’s a canvas which is a piece of art in itself. A chord progression can be subtle and in the background or it can be blatant and up front; it can be simple and catchy, or it can be technical and complex, it can stay in one key or it can change like the seasons. In any of these cases a chord progression is what drives the song as it literally shapes the music that accompanies it. Chord progressions are like a cozy home where melody and rhythm can kick their feet up. This guide is meant to inject an interest in songwriting in new and old guitarists alike, I hope that at some point after reading this you will pick up your old guitar, blow off the dust, and join me in playing music. Chord Progression Guide This handy little guide will help all musicians create their own catchy chord progressions on the fly! Major Chord Chart Above is a chord chart for the 7 most used keys. Minor Chord Chart Chord Theory