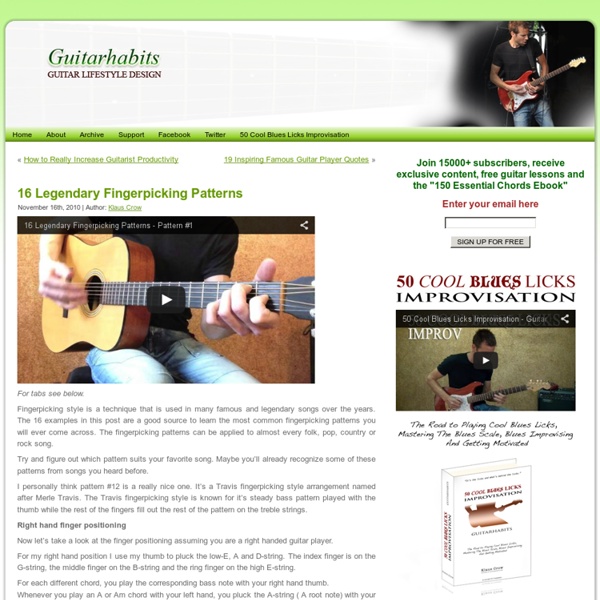 For tabs see below. Fingerpicking style is a technique that is used in many famous and legendary songs over the years. The 16 examples in this post are a good source to learn the most common fingerpicking patterns you will ever come across. The fingerpicking patterns can be applied to almost every folk, pop, country or rock song. Try and figure out which pattern suits your favorite song. I personally think pattern #12 is a really nice one. Right hand finger positioning Now let’s take a look at the finger positioning assuming you are a right handed guitar player. For my right hand position I use my thumb to pluck the low-E, A and D-string. For each different chord, you play the corresponding bass note with your right hand thumb. In the video lessons above the tabs I show you what each pattern sounds like and explain the pattern slowly in close up. Practice each and every one of them thoroughly. Enjoy! Did like the patterns and do you like Guitarhabits? Related:  guitar lessons

Guitar Lessons : Steve Vai's 30 Hour Workout - 30 hour path to virtuoso enlightenment or how to destroy your pop career in one easy lesson In this section, I'll explain methods to help you find your unique voice as a guitarist, and explain techniques that can aid your expression on the instrument. These laner items include vibrato, bent notes, harmonics, whammy-bar stunts and dynamics. Everything I've told you thus far will help you in your quest to become an accomplished guitar player. Guitar Lessons, Interviews, News, Reviews, & More | Guitar Messenger – Auditioning For Lady Gaga June 21st, 2011 by Ben Levin Dear Fellow Musicians, In January 2010 I had the opportunity to audition for the guitarist position on Lady Gaga’s international arena tour. I made it to the final 15 guitarists and learned a few valuable things about the music business, particularly the music world outside of Berklee. I think it is definitely worth reading this because the experience was fascinating. The audition opportunity fell on my lap by sheer luck. Lady Gaga My name is Ben Levin and I am a guitarist interested in auditioning for Lady Gaga’s band. Here is my website for some more examples: I hope you enjoy the music! After I found out that I had been accepted to audition, I immediately began absorbing Lady Gaga’s repertoire. The first day of auditions was on Monday, January 18th, 2010 in New York City. A few hours went by and the casting staff told the guitarists to line up. The first guitarist played for about 6 seconds before the judges told him to stop.

30+ Insanely Useful Websites for Guitarists The guitar is an instrument that knows no genre and no boundaries--one of the reasons why it's arguably the world's most beloved instrument. Here are over 30 incredibly useful (and often entertaining) websites dedicated to the guitar and its admirers. Must-see sites 1. 2. 3. 4. 5. Soloing 6. 100 Greatest Guitar Solos is a ranked list of the greatest guitar solos of all time with included tablature for each. 7. 20 Greatest Guitar Solos Ever resembles the beginning of the above list, but with crispy and delicious YouTube videos for each entry. 8. Inspirational articles 9. 10. 99 Tips to Help You Play Better features 99 pearls of wisdom from guitar wizards like Steve Vai, Joe Satriani and Jimmi Page. “Your sound is in your hands as much as anything. 11. Free guitar tabs and guitar chords The online guitar tablature community was in turmoil just a few months ago when the legal status of tabs was questioned. 12. 13. 14. 15. 17. Free guitar lessons 18. 19. 20. 21. 22. 23. 24. Guitar theory 25. 26.

JGuitar JGuitar is a set of useful tools for players of stringed instruments. JGuitar's powerful chord and scale calculators replace traditional chord and scale dictionaries by providing dynamic calculation which works for any stringed instrument in any tuning. Users can alter the tunings of the instruments and even the instruments themselves. In fact, JGuitar was designed to work with any number of strings or frets. Trying to learn a song and need some chord diagrams? We'll be adding more tools in the future and improving the ones we have based on your feedback so feel free to use our contact page to send us any feedback. Musical Form There are several ways to approach a composition. Start with overall planning then start sketching. Sketch first then develop an overall plan that fits your ideas. Note: Overall Planning is always in the equation. Sketching without thought of structure leads to aimless stream-of-conscious lack of cohesion.

The 13 scariest pieces of classical music for Halloween Celebrate Halloween in macabre style with these bone-chilling masterpieces! Mussorgsky: Night on Bald Mountain The image of brooding, winged ghouls wreaking havoc on a mountain village under cover of night has terrified generations of young children in Walt Disney's Fantasia. Inspired by Russian legend, Mussorgsky's tone poem depicts the dark ritual of a witches' sabbath. Sadly, it was never performed in his lifetime, but the arrangement by his friend Rimsky-Korsakov has become a concert blockbuster. The version used in Fantasia was orchestrated by Leopold Stokowski. Marschner: Der Vampyr (Overture) The vampires in tabloids and teen novels today have nothing on the 19th-century European variety. Saint-Saëns: Danse Macabre Saint-Saëns’s creepy 1874 tone poem is a Halloween classic, depicting the revelry of the Grim Reaper at midnight every year at this time. Herrmann: Psycho Suite Berlioz: Symphonie fantastique: Dreams of a Witches' Sabbath Liszt: Totentanz Liszt loved to flirt with death.

fretjam Guitar Lessons - Be Yourself On Guitar Random Rhythm Motif Generator | Learn How to Write Songs Some ways you can use these rhythm patterns. 1) You can play around with these patterns by going to the online drum sequencer and enter the pattern into the app to sample the pattern. 2) Combine both patterns to make a new single pattern. 3) Augment the Values. 4) Diminish the Values. 5) Combine the rhythm patterns with results from the Melody Shape Generator More Useful tool for Songwriters To download the free Song Writers checklist, please provide your email in form below. Rhythm I Will Destroy This Robot Sheet-Music Sight-Reader, I Swear I Will Sight-reading complex musical notation takes years of training, hundreds or thousands of hours of practice, sitting in front of the piano, a metronome drilling its infernal clicks into your brain. Eventually you'll gain the ability to read and perform just about any piece of music that's set in front of you, without ever having seen it before. It does not come easily, and it is not a natural skill; you have to keep practicing to retain it. Each month you don't practice takes two months to earn back the power you've squandered. It is a human achievement, a way in which we force our brains and fingers and feet and eyes to perform a task we are not born able to do. I was classically trained in piano for about twelve years, and this stupid little gadget has immediately negated all of my hard work. I hereby pledge to destroy it. [DigInfo]