Recruiting: 8 Qualities Your Best Employees Should Have 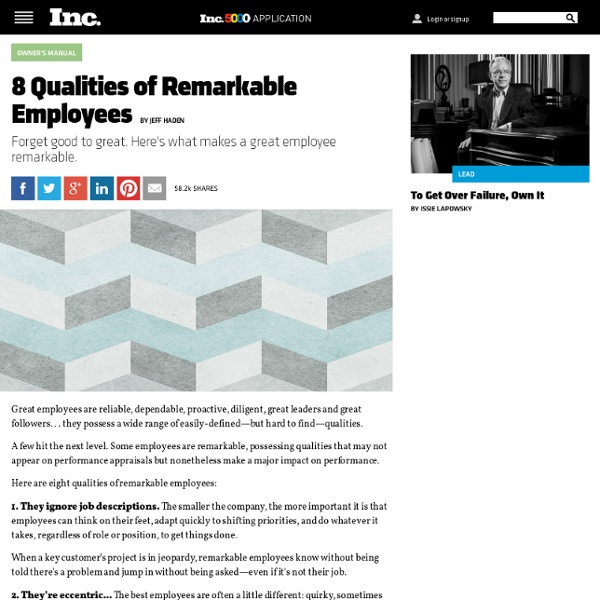 Great employees are reliable, dependable, proactive, diligent, great leaders and great followers... they possess a wide range of easily-defined—but hard to find—qualities. A few hit the next level. Some employees are remarkable, possessing qualities that may not appear on performance appraisals but nonetheless make a major impact on performance. Here are eight qualities of remarkable employees: 1. They ignore job descriptions. When a key customer's project is in jeopardy, remarkable employees know without being told there's a problem and jump in without being asked—even if it's not their job. 2. People who aren't afraid to be different naturally stretch boundaries and challenge the status quo, and they often come up with the best ideas. 3. Remarkable employees know when to play and when to be serious; when to be irreverent and when to conform; and when to challenge and when to back off. 4. 5. 6. An employee once asked me a question about potential layoffs. 7. 8. Forget good to great.

An Introvert's Guide to Networking - Lisa Petrilli by Lisa Petrilli | 9:15 AM January 25, 2012 I learned the critical importance of networking, and discovered my natural aversion to it, early in my career. I was a new college graduate working in the strategic planning division of a $10 billion company, and our business unit had been invited to a retirement party for one of the top executives. The gentleman retiring was someone I’d looked up to during my brief tenure, and I wanted him to know he’d made an impact on me. Half Sigma: Why a career in computer programming sucks Temporary nature of knowledge capital Let’s being by reviewing what I previously wrote about the four types of human capital. Computer programming is a job that’s heavily dependent on temporary knowledge capital. Uncompromising Photos Expose Juvenile Detention in America A 12-year-old in his cell at the Harrison County Juvenile Detention Center in Biloxi, Mississippi. The window has been boarded up from the outside. The facility is operated by Mississippi Security Police, a private company.

How to Run a Successful Project As described in the first article in this series, many projects fail because organizations put their practices before their people. This happens when organizations try to make an employee's human nature and emotional makeup fit their processes and policies. This traditional approach to project management emphasizes developing complex guidelines to manage projects across all phases -- from implementing phase reviews, performance metrics, and project steering committees to creating risk management dashboards.

8 Job Search Tips From the Co-Founder of LinkedIn Early on in The Start-up of You, Reid Hoffman takes on the sacred cow of career advice books, making it clear that the timeworn exhortations of What Color is Your Parachute? won't fly in this economy. "That's the wrong question," Hoffman, the co-founder and chairman of LinkedIn writes (with the help of coauthor Ben Casnocha). Interview Questions for Data Scientists Great data scientists come from such diverse backgrounds that it can be difficult to get a sense of whether someone is up to the job in just a short interview. In addition to the technical questions, I find it useful to have a few questions that draw out the more creative and less discrete elements of a candidate’s personality. Here are a few of my favorite questions. What was the last thing that you made for fun?This is my favorite question by far — I want to work with the kind of people who don’t turn their brains off when they go home.

Management Secrets: Core Beliefs of Great Bosses A few years back, I interviewed some of the most successful CEOs in the world in order to discover their management secrets. I learned that the "best of the best" tend to share the following eight core beliefs. 1. Business is an ecosystem, not a battlefield. Douchebag Decree: If I Were a Douchebag Forbes Writer Edition In case you missed it, Forbes contributor Gene Marks published a magnum opus of douchebaggery earlier this week called "If I Were a Poor Black Kid." Thesis: "Dear poor black kids, you should just try getting good grades by using Google Scholar and watching TED talks. Thank me later, GM." The blog world erupted, generating dozens of pieces slamming Marks' non-logic. Yesterday, another astute Forbes contributor exposed Marks' history of writing disgusting pieces because he knows they will generate pageviews. That's right.

7 things great employees do COMMENTARY This definitely isn't the first time somebody's written about what makes employees special. But it may very well be the first time someone's telling you what will genuinely get your management excited about you and ultimately get you promoted. No kidding. Look, you've got to understand the reality here. People will cite ridiculously esoteric research studies and pull all sorts of popular, feel-good stuff out of their utopian behinds -- whatever it takes to get you to click. Distinguish Yourself from the Market, Not Just Other Applicants - Richard McDermott by Richard McDermott | 2:31 PM April 2, 2012 If you’re an experienced professional, it can be tough to find a job in today’s market. Sally (name has been changed) was laid off six months ago. She was a training manager for a large corporation, advising middle and senior managers on career development. She’d worked for her company for a dozen years and was regarded by her boss and her peers as a good performer.