The 7 Natural Laws of the Universe « Path to Enlightenment 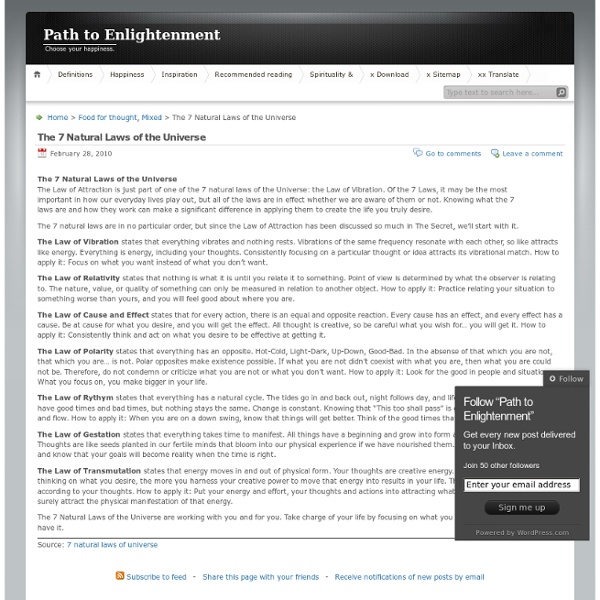 50 Life Secrets and Tips | High Existence - StumbleUpon Memorize something everyday.Not only will this leave your brain sharp and your memory functioning, you will also have a huge library of quotes to bust out at any moment. Poetry, sayings and philosophies are your best options.Constantly try to reduce your attachment to possessions.Those who are heavy-set with material desires will have a lot of trouble when their things are taken away from them or lost. Possessions do end up owning you, not the other way around. Become a person of minimal needs and you will be much more content.Develop an endless curiosity about this world.Become an explorer and view the world as your jungle. Stop and observe all of the little things as completely unique events. Try new things. Read “Zen and the Art of Happiness” by Chris Prentiss.This book will give you the knowledge and instruction to be happy at all times regardless of the circumstances.

Inspirational Movies Atomic Structure An updated version of this lesson is available at Visionlearning: Atomic Theory & Ions & Isotopes In the last lesson we learned that atoms were particles of elements, substances that could not be broken down further. In examining atomic structure though, we have to clarify this statement. An atom cannot be broken down further without changing the chemical nature of the substance. For example, if you have 1 ton, 1 gram or 1 atom of oxygen, all of these units have the same properties. We can break down the atom of oxygen into smaller particles, however, when we do the atom looses its chemical properties. Atoms are made up of 3 types of particles , and . A neutron walked into a bar and asked how much for a drink. The bartender replied, "for you, no charge." -Jaime - Internet Chemistry Jokes The atom above, made up of one proton and one electron, is called hydrogen (the abbreviation for hydrogen is H). Keep in mind that atoms are extremely small. As you can see, helium is larger than hydrogen.

30 Financial Moves Before 30- Ideas Worth Trying January 13, 2011, 6:00 amby:MD Category:Miscellaneous I started reading the Art of Non-Conformity the other day and the idea of the life list/bucket list got me thinking again. I started thinking about my bucket list for what I want to accomplish before I turn 30 (in 7 years). Then I started to get more specific. I started thinking about what I want to accomplish financially before 30. Then I realized that my mind was all over the place. Since every financial bucket list is unique to your own situation, I decided to outline 30 financial moves that might be of interest to your unique financial situation before you turn 30. 1. Keep a buffer in a savings account because you never know when a rainy day will hit you out of nowhere. 2. You can debate good debt vs bad debt, but at the end of the day you should try to kill off your credit card debt before you turn 30. 3. The sooner you start planning for your retirement, the sooner you have compound interest working on your side. 4. 5. 6. 7. 8. 9.

5 Really Weird Things About Water Water, good ol' H2O, seems like a pretty simple substance to you and me. But in reality, water - the foundation of life and most common of liquid - is really weird and scientists actually don't completely understand how water works. Here are 5 really weird things about water: 1. Hot Water Freezes Faster Than Cold Water Take two pails of water; fill one with hot water and the other one with cold water, and put them in the freezer. In 1963, a Tanzanian high-school student named Erasto B. Thankfully, Mpemba didn't back down - he convinced a physics professor to conduct an experiment which eventually confirmed his observations: in certain conditions, hot water indeed freezes before cold water*. Actually, Mpemba was in good company. But how do scientists explain this strange phenomenon? 2. Everybody knows that when you cool water to 0 °C (32 °F) it forms ice ... except that in some cases it doesn't! Note: Similarly, superheated water remains liquid even when heated past its boiling point. 3. 4.

The 5 Things I'd Tell My 21 Year Old Entrepreneurial Self&|&JonBischke.com - StumbleUpon 12 years ago I set out on my first foray into the world of entrepreneurship. The company was called MCSETutor.com (we later changed the name to the equally obtuse 2000Tutor.com) and while it wasn’t a huge success by dot com era standards we did sell it for a tidy profit. But looking back I’m shocked at how little I knew about entrepreneurship. As I’m sure any entrepreneur would love to do, I’d give anything to step back in time 12 years and have a chat with my 21 year old self. And while I can’t do that I do love to share lessons with as many young entrepreneurs as I can. #1 – Take as much risk as you can as early in life as you can. I’m not talking stupid risks. #2 – Nail the fundamentals. Take some of that time and use it to build skills that will make you more effective and productive the rest of your life. #3 – Surround yourself with people who expect you to succeed in a big way. “You are the average of the five people you spend the most time with.” I’m lucky. Fantastic.

Dimension A diagram showing the first four spatial dimensions. 1-D: Two points A and B can be connected to a line, giving a new line segment AB. 2-D: Two parallel line segments AB and CD can be connected to become a square, with the corners marked as ABCD. 3-D: Two parallel squares ABCD and EFGH can be connected to become a cube, with the corners marked as ABCDEFGH. 4-D: Two parallel cubes ABCDEFGH and IJKLMNOP can be connected to become a hypercube, with the corners marked as ABCDEFGHIJKLMNOP. In physical terms, dimension refers to the constituent structure of all space (cf. volume) and its position in time (perceived as a scalar dimension along the t-axis), as well as the spatial constitution of objects within—structures that correlate with both particle and field conceptions, interact according to relative properties of mass—and are fundamentally mathematical in description. The concept of dimension is not restricted to physical objects. A tesseract is an example of a four-dimensional object.

10 Tips for College Students After writing the time management article Do It Now, which was based on my experience of graduating college in three semesters with two degrees, I received many follow-up questions from students asking for more advice. Here are 10 tips to help you create a productive and memorable college experience… and most of all, to deeply enjoy this time in your life. 1. Many college students really don’t have a clear reason for being there other than the fact that they don’t know what else to do yet. As I’ve stated previously on this blog, the three-semester deal wasn’t my first time at college. That experience sent me into a bit of a tailspin. Your goals for college will likely be different than mine. 2. Once you know why you’re going to college, imagine your ideal outcome. Before I returned to school, I spent hours visualizing the kind of experience I wanted to have. This was a really important step. Visualization allows you to make mistakes in advance. 3. What about prerequisites? 4. 5. 6. 7.