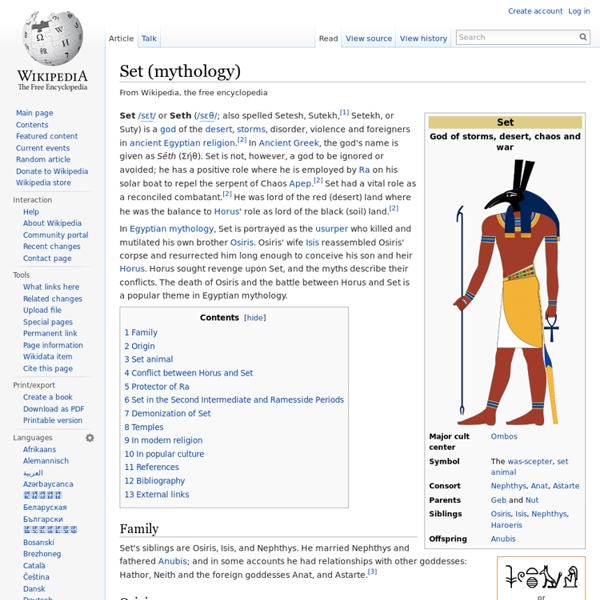 Set /sɛt/ or Seth (/sɛθ/; also spelled Setesh, Sutekh,[1] Setekh, or Suty) is a god of the desert, storms, disorder, violence and foreigners in ancient Egyptian religion.[2] In Ancient Greek, the god's name is given as Sēth (Σήθ). Set is not, however, a god to be ignored or avoided; he has a positive role where he is employed by Ra on his solar boat to repel the serpent of Chaos Apep.[2] Set had a vital role as a reconciled combatant.[2] He was lord of the red (desert) land where he was the balance to Horus' role as lord of the black (soil) land.[2] In Egyptian mythology, Set is portrayed as the usurper who killed and mutilated his own brother Osiris. Osiris' wife Isis reassembled Osiris' corpse and resurrected him long enough to conceive his son and heir Horus. Horus sought revenge upon Set, and the myths describe their conflicts. The death of Osiris and the battle between Horus and Set is a popular theme in Egyptian mythology. Family Set's siblings are Osiris, Isis, and Nephthys. Origin

Tonatiuh In Aztec mythology, Tonatiuh (Nahuatl: Ōllin Tōnatiuh [oːlːin toːˈnatiʍ] "Movement of the Sun") was the sun god.[1] The Aztec people considered him the leader of Tollan, heaven. He was also known as the fifth sun, because the Aztecs believed that he was the sun that took over when the fourth sun was expelled from the sky. Description[edit] Aztec theology held that each sun was a god with its own cosmic era, the Aztecs believed they were still in Tonatiuh's era. In the Aztec calendar, Tonatiuh is the lord of the thirteen days from 1 Death to 13 Flint. See also[edit] Aztec sun stone References[edit] External links[edit] Windows to The Universe page on Tonatiuh

Derinkuyu Derinkuyu is a town and district of Nevşehir Province in the Central Anatolia region of Turkey. According to 2010 census, population of the district is 22,114 of which 10,679 live in the town of Derinkuyu.[3][4] The district covers an area of 445 km2 (172 sq mi),[5] and the average elevation is 1,300 m (4,265 ft), with the highest point being Mt. Ertaş at 1,988 m (6,522 ft). Located in Cappadocia, Derinkuyu is notable for its large multi-level underground city (Derinkuyu Underground City), which is a major tourist attraction. The historical region of Cappadocia, where Derinkuyu is situated, contains several historical underground cities, carved out of a unique geological formation. History[edit] See also[edit] Notes[edit] References[edit] External links[edit] Coordinates:

Shango Shango statuette This depiction of Shango on horseback has been attributed to the workshop of the renowned Yoruba carver Toibo, of the town of Erin. It was probably carved in the 1920s or 1930s for the timi (king) of Ede (one of the historic Yoruba kingdoms), who kept it in a shrine dedicated to the orisha (god) Shango. Equestrian figures are potent symbols of power in many parts of Africa where ownership of horses was long restricted to warriors and political leaders. Figure of a Devotee of Shango Holding an Oshe Shango, Brooklyn Museum In the Yorùbá religion, Ṣàngó (also spelled, Sango, Shango, often known as Xangô or Changó in Latin America and the Caribbean, and also known as Jakuta[1]) (from '=shan, 'to strike') is perhaps one of the most popular Orisha; also known as the god of fire, lightning and thunder. Historical Sango[edit] Veneration of Shango[edit] The religious ritual of Shango was possibly designed in order to help the devotees of Shango gain self-control. See also[edit]

Gilgul Gilgul/Gilgul neshamot/Gilgulei Ha Neshamot (Heb. גלגול הנשמות, Plural: גלגולים Gilgulim) describes a Kabbalistic concept of reincarnation. In Hebrew, the word gilgul means "cycle" and neshamot is the plural for "souls." History of the concept of Gilgul in Jewish thought[edit] The notion of reincarnation, while held as a mystical belief by some, is not an essential tenet of traditional Judaism. Among well known Rabbis who rejected the idea of reincarnation are Saadia Gaon, David Kimhi, Hasdai Crescas, Yedayah Bedershi (early 14th century), Joseph Albo, Abraham ibn Daud and Leon de Modena. With the 16th-century rational systemisation of Cordoveran Kabbalah by the Ramak, and the subsequent new paradigm of Lurianic Kabbalah by the Ari, Kabbalah replaced "Hakirah" (Rationalistic Medieval Jewish Philosophy) as the mainstream traditional Jewish theology, both in scholarly circles and in the popular imagination. Jewish process of Gilgul in Kabbalah[edit] Expression of Divine compassion[edit]

Raghuvaṃśa Raghuvamsa (Sanskrit: रघुवंश, Raghuvaṃśa) is a Sanskrit mahakavya (epic poem) by the most celebrated Sanskrit poet Kalidasa. It narrates, in 19 sargas (cantos), the stories related to the Raghu dynasty, namely the family of Dilipa and his descendants up to Agnivarna, who include Raghu, Dasharatha and Rama. The earliest surviving commentary written on the work is that of the 10th-century Kashmirian scholar Vallabhadeva.[1] The most popular and widely available commentary, however, is the Sanjivani, written by Mallinatha (ca.1350-1450). Geographical and historical references[edit] The warrior Raghu leads a military expedition to Transoxiana. After crossing the Oxus, Raghu and his army encountered the Kambojas, an ancient Indo-Scythian people often mentioned in Indian texts. Metres used in the epic[edit] See also[edit] References[edit] Basham, A.L. (2000). External links to the text[edit]

Xiuhtecuhtli Statue of Xiuhtecuhtli in the British Museum.[1] In Aztec mythology, Xiuhtecuhtli [ʃiʍtekʷt͡ɬi] ("Turquoise Lord" or "Lord of Fire"),[2] was the god of fire, day and heat.[3] He was the lord of volcanoes,[4] the personification of life after death, warmth in cold (fire), light in darkness and food during famine. He was also named Cuezaltzin [kʷeˈsaɬt͡sin] ("flame") and Ixcozauhqui [iʃkoˈsaʍki],[5] and is sometimes considered to be the same as Huehueteotl ("Old God"),[6] although Xiuhtecuhtli is usually shown as a young deity.[7] His wife was Chalchiuhtlicue. Xiuhtecuhtli is sometimes considered to be a manifestation of Ometecuhtli, the Lord of Duality, and according to the Florentine Codex Xiuhtecuhtli was considered to be mother and father of the Gods,[8] who dwelled in the turquoise enclosure in the center of earth.[9] The Nahuatl word xiuhuitl means "year" as well as "turquoise" and "fire",[9] and Xiuhtecatl was also the god of the year and of time. Attributes[edit] See also[edit]

Indra Origins[edit] Aspects of Indra as a deity are cognate to other Indo-European gods; they are either thunder gods such as Thor, Perun, and Zeus, or gods of intoxicating drinks such as Dionysus. The name of Indra (Indara) is also mentioned among the gods of the Mitanni, a Hurrian-speaking people who ruled northern Syria from ca.1500BC-1300BC.[5] Vedic Indra corresponds to Verethragna of the Zoroastrian Avesta as the noun verethragna- corresponds to Vedic vrtrahan-, which is predominantly an epithet of Indra. The word vrtra-/verethra- means "obstacle". Thus, vrtrahan-/verethragna- is the "smiter of resistance". In the Rigveda[edit] The Rigveda states, He under whose supreme control are horses, all chariots, the villages, and cattle; He who gave being to the Sun and Morning, who leads the waters, He, O men, is Indra. (2.12.7, trans. It further states, Indra, you lifted up the pariah who was oppressed, you glorified the blind and the lame. Status and function[edit] Characteristics[edit]

Jupiter (mythology) The consuls swore their oath of office in Jupiter's name, and honoured him on the annual feriae of the Capitol in September. To thank him for his help (and to secure his continued support), they offered him a white ox (bos mas) with gilded horns.[10] A similar offering was made by triumphal generals, who surrendered the tokens of their victory at the feet of Jupiter's statue in the Capitol. Some scholars have viewed the triumphator as embodying (or impersonating) Jupiter in the triumphal procession.[11] During the Conflict of the Orders, Rome's plebeians demanded the right to hold political and religious office. The augures publici, augurs were a college of sacerdotes who were in charge of all inaugurations and of the performing of ceremonies known as auguria. The role of Jupiter in the conflict of the orders is a reflection of the religiosity of the Romans. The first secession was caused by the excessive burden of debts that weighed on the plebs.