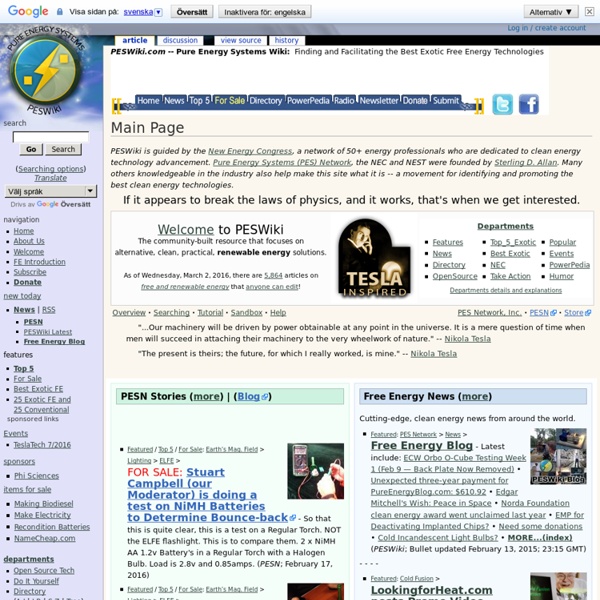 From PESWiki PESWiki is guided by the New Energy Congress, a network of 50+ energy professionals who are dedicated to clean energy technology advancement. More recently, the New Energy Systems Trust (NEST) has been established to help incubate these technologies to market. Pure Energy Systems (PES) Network, the NEC and NEST were founded by Sterling D. Allan. Many others knowledgeable in the industry also help make this site what it is -- a movement for identifying and promoting the best clean energy technologies.

German Inventor solves permanent magnet motor puzzle - wants to 'give away' the discovery... - Sepp Hasslberger Thomas Engel is a successful German inventor with more than a hundred patented inventions to his credit. He - like many of his peers - does not look back at a successful school education, but evidently that is not necessary for success if you are smart and, as some say it might even be counter productive, stifling creativity. Engel has figured out the working principle of a type of motor many inventors and tinkerers have been working on - so far unsuccessfully.

Evidence Of Free Energy In The Space All Around Us Have you ever heard about vacuum energy? Everything in the entire universe, everything that you and I perceive to be solid matter, is actually not matter at all. All the space around us is pure energy which we will call vacuum energy. Not only that, but this vacuum energy is infinitely dense. The reality that you and I have been led to believe in is a lie. The only truly dense thing in this universe is the apparent empty space all around us, and whenever we see objects, hold them, touch them, or otherwise … that is most likely due to a gradient within the infinite density of the vacuum energy which gives off a little oscillation of energy slow enough for our senses to perceive it.

Osprey Music Download OspreyMusic Binaural Beats: Go from 12 hz down to low delta with mental alert spike up to lucid dreaming. Binaural beats or binaural tones are auditory processing artifacts, or apparent sounds, the perception of which arises in the brain for specific physical stimuli.

Coming Soon: MAGEN magnetic energy engine A group in Australia has an all-magnet motor, around nine inches cubed in size, that they claim can turn a 2 kilowatt generator continuously with no external assistance to start or run. They intend to demonstrate the engine publicly at the end of July or early August. via Sterling D. Allan Pure Energy Systems News I received the following email on June 8, and was given permission to post it here, without disclosing the originator, at least not yet. (slightly edited) The Fuelless Engine Plans The engine runs very smooth and quiet, and the best part is, it does not pollute the air! The rpm's are adjustable or can be built to run at one speed. This engine does not run on any type of gasoline, oil or any other combustible fuel. The free electrical energy produced by the motor is replaced back into the motor and reused by the motor. Our plans are simple to follow, and provide a complete parts list, as well as several supplier contacts. Supplies are shipped right to your front door.

2017 The End Of The Beginning - New Energy Breakout - Atom Ecology One of the early pioneers of the sina qua non of alternative new energy, ‘cold fusion’, now shines making brilliant progress on imminent delivery of colossal amounts of low cost energy. Fossil Fuel/Fool ‘Gaslight’ Efforts Fail Randy Mills, one of the early pioneers presenting his ‘garage’ experiments at physics conferences on the new energy of cold fusion is today, the 1st. day of 2017, featured in a lengthy CNN news report. Free Audio - Manifesting Results 7 Flares Twitter 0 Facebook 7 Pin It Share 0 Google+ 0 StumbleUpon 0 7 Flares × Shamanic Consciousness This isochronic tone is set at a steady 4.5 Hz which is speculated to be the frequency of the Tibetan Buddhist Chants. Since this tone starts of in such a low frequency, it is advised that you are already highly relaxed and on the verge of the Alpha State already.

ECAT Technology ECAT Technology The ECAT technology will revolutionize energy production as we know it. The main reason for this paradigm shift in energy production is the high Energy Density in the ECAT fuel which implies that the ECAT fuel cost will be much lower than any conventional energy source. See LENR Technology for details. ECAT Fuel (Ni-H) compared to oil: Costs 1/1000 of Oil – (Cost less than transportation cost of oil)Energy Density > 100 000 x oilPower Density > 100 kW/kgReserves 10 billion years – oil 150 yearsNo emissions, no pollution, no noise.1 liter Ni-H is energy equivalent of 2 000 000 liter oil

Bedini Motor test Bedini Simple Science Fair motor - 03/08/00 Thanks to John Bedini for sharing this information,more info will be added as he can provide it. A 10 year old girl builds a science fair project that appears to be unusually efficient. Subject: Real Motor built by 10 year old Date: Tue, 7 Mar 2000 23:27:30 -0800 From: john1 To: Jerry Decker Jerry, Here is a little girl that I talked to about a motor and she built it with a little help on the phone, it generates power and runs at 4000 rpm. Here is the MPG of all the since fair awards she took with one of My Motors.