How to Adopt a Social Media Lifestyle 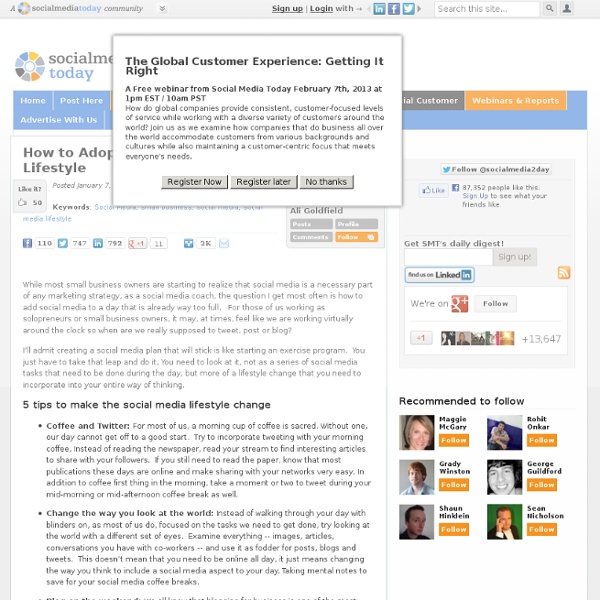 While most small business owners are starting to realize that social media is a necessary part of any marketing strategy, as a social media coach, the question I get most often is how to add social media to a day that is already way too full. For those of us working as solopreneurs or small business owners, it may, at times, feel like we are working virtually around the clock so when are we really supposed to tweet, post or blog? I’ll admit creating a social media plan that will stick is like starting an exercise program. You just have to take that leap and do it. You need to look at it, not as a series of social media tasks that need to be done during the day, but more of a lifestyle change that you need to incorporate into your entire way of thinking. 5 tips to make the social media lifestyle change Coffee and Twitter: For most of us, a morning cup of coffee is sacred. Connect: Authored by: Ali Goldfield See complete profile

5 Ways To Be Recognized as A Social Media Influencer Can You Recognize A Social Media Influencer, When You See Them? Well the obvious answer is yes, absolutely you can. Think of some of your favorite Social Media Influencers, why you choose to follow them and how they influence you personally. Although many of the effective principles are paralleled, leading and influencing in the world of social media can sometimes be more difficult than leading/influencing in a traditional leadership/work settings. As We May Think - Magazine As Director of the Office of Scientific Research and Development, Dr. Vannevar Bush has coordinated the activities of some six thousand leading American scientists in the application of science to warfare. In this significant article he holds up an incentive for scientists when the fighting has ceased. He urges that men of science should then turn to the massive task of making more accessible our bewildering store of knowledge.

The Power of Crowd and Place: A Conversation with Jeff Kirchick from SCVNGR Jeff Kirchick is the Universities and Schools Specialist for SCVNGR, a gaming platform about doing challenges at places. I first met Jeff at the CASE Social Media Conference in San Francisco where he was organizing a “trek” for the conference. It was the most fun I’d had participating in extra-curricular activities at a conference. I asked Jeff to talk a little about how SCVNGR uses the power of “the crowd and place.” The biggest mistakes you can make on Facebook pages Today, we are going to analyze a touchy topic – mistakes that companies most often do on their Facebook Pages, and go into the details of them. This list of most common mistakes should give you a better idea of how to post on your Facebook Page. They are not ordered by importance. 1. Post too many times a day on Facebook This could be also represented as spamming their Facebook fans which shouldn't be done by any means.

How I Use Mindmapping to Write I use lots of tools for writing. The other day, I talked about the importance of writing practice. Today, as I’m working on a new speech, I wanted to share another tool I use: mind mapping. Before you ask, because the technology minded of you often do, this particular mindmapping software is called Mind Node and it’s for Mac. There are plenty of tools for Windows and some that operate online. Why Schools Need to Get Social, Local and Mobile Troy Williams is Vice President and General Manager of Macmillan New Ventures, the global media company’s division that discovers, develops and markets innovative technologies that make learning more engaging. It’s not revelatory that the academic and the tech worlds move at vastly different paces. Education often lags behind when it comes tech adoption and integration. But there has never been a better time for innovation in the classroom. Although public school systems face drastic budget cuts and harsh public scrutiny, we continue to see the private sector (as well as government initiatives) invest in vibrant and disruptive education tech. SEE ALSO: Why Education Needs to Get Its Game On

Dangers of social groupthink: A case study in Enterprise 2.0, Social CRM and Social Business For sure, there’s a lot of Goodness in social media—in our personal lives and business. But also a lot of issues to be worked out. That’s why two years ago I established a Social Business category on CustomerThink, and last year launched SocialBusinessOne, a community dedicated to the topic. 7 Ways to Optimize Content for Social Sharing Social media can be a very valuable tool for promoting content. While it's a good idea to make sure you're spreading it to your direct network of fans and followers on sites like Facebook, LinkedIn, Twitter, and Google+, the true value that social media provides is its ability to spread content beyond your direct network of social media connections. By making it easy for others to share your content to their personal networks as well, you'll be significantly extending the reach of your content. So what can you do to help move this process along? While you can't directly influence whether someone decides to share your content, there are several things you can do to indirectly encourage and make it simple for them.