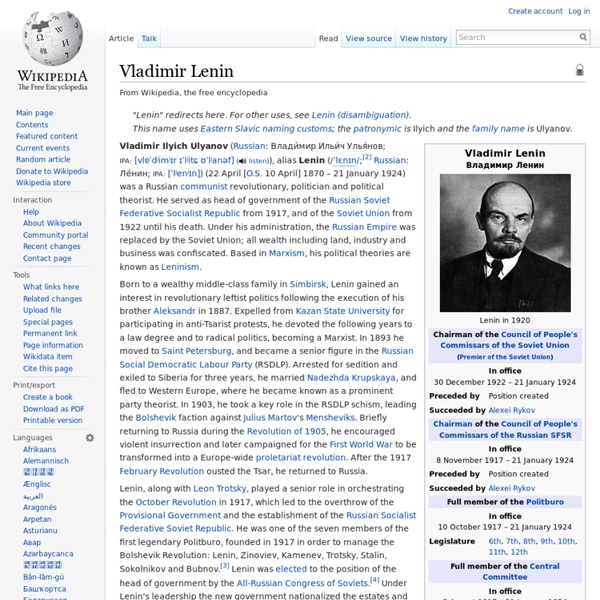 Vladimir Ilyich Ulyanov (Russian: Влади́мир Ильи́ч Улья́нов; IPA: [vlɐˈdʲimʲɪr ɪˈlʲitɕ ʊˈlʲanəf]), alias Lenin (/ˈlɛnɪn/;[2] Russian: Ле́нин; IPA: [ˈlʲenʲɪn]) (22 April [O.S. 10 April] 1870 – 21 January 1924) was a Russian communist revolutionary, politician and political theorist. He served as head of government of the Russian Soviet Federative Socialist Republic from 1917, and of the Soviet Union from 1922 until his death. Under his administration, the Russian Empire was replaced by the Soviet Union; all wealth including land, industry and business was confiscated. Based in Marxism, his political theories are known as Leninism. Lenin, along with Leon Trotsky, played a senior role in orchestrating the October Revolution in 1917, which led to the overthrow of the Provisional Government and the establishment of the Russian Socialist Federative Soviet Republic. Early life Childhood: 1870–87 University and political radicalism: 1887–93 Revolutionary activities The 1905 Revolution: 1905–07

Chelsea Manning Assigned in 2009 to an Army unit in Iraq as an intelligence analyst, Manning had access to classified databases. In early 2010, she leaked classified information to WikiLeaks and confided this to Adrian Lamo, an online acquaintance. Lamo informed Army Counterintelligence, and Manning was arrested in May that same year. The material included videos of the July 12, 2007 Baghdad airstrike, and the 2009 Granai airstrike in Afghanistan; 250,000 U.S. diplomatic cables; and 500,000 Army reports that came to be known as the Iraq War logs and Afghan War logs. Much of the material was published by WikiLeaks or its media partners between April and November 2010.[8] Reaction to Manning's disclosures, arrest, and sentence was mixed. Background Early life Born Bradley Edward Manning in 1987 in Crescent, Oklahoma, she was the second child of Susan Fox, originally from Wales, and Brian Manning, an American. Parents' divorce, move to Wales Manning's father remarried in 2000, the same year as his divorce.

Xenophon Xenophon (/ˈzɛnəfən/; Greek: Ξενοφῶν, Xenophōn, Greek pronunciation: [ksenopʰɔ̂ːn]; c. 430 – 354 BC), son of Gryllus, of the deme Erchia of Athens, also known as Xenophon of Athens, was a Greek historian, soldier, mercenary, and student of Socrates. While not referred to as a philosopher by his contemporaries, his status as such is recently a popular topic of debate. He is known for writing about the history of his own times, the late 5th and early 4th centuries BC, especially for his account of the final years of the Peloponnesian War. His Hellenica, which recounts these times, is considered to be the continuation of Thucydides’ The Peloponnesian War. His youthful participation in the failed campaign of Cyrus the Younger to claim the Persian throne inspired him to write about the Persian empire and its history. Life[edit] Early years[edit] Little is known about Xenophon other than what he wrote about himself. Anabasis[edit] Expedition with Cyrus[edit] Return[edit] Exile and Death[edit]

Lists of Note By 1914, Albert Einstein 's marriage to his wife of 11 years, Mileva Marić , was fast deteriorating. Realising there was no hope for their relationship on a romantic level, Einstein proposed that they remain together for the sake of their children, but only if she agree to the following list of conditions. Mileva accepted them, but to no avail. You will make sure: that my clothes and laundry are kept in good order; that I will receive my three meals regularly ; that my bedroom and study are kept neat, and especially that my desk is left for . You will renounce all personal relations with me insofar as they are not completely necessary for social reasons. my sitting at home with you; my going out or travelling with you. You will obey the following points in your relations with me: you will not expect any intimacy from me, nor will you reproach me in any way; you will stop talking to me if I request it; you will leave my bedroom or study immediately without protest if I request it.

Mozi Name[edit] There has been considerable debate about the actual name of Mozi, not less than three concepts of its origin exist as of the date. 1. Traditionally, Mozi was said to have inherited the surname "Mo" from his supposed ancestor, the Lord of Guzhu (Chinese: 孤竹君; pinyin: Gūzhú Jūn), himself descended from Shennong, the legendary emperor. 2. 3. Life[edit] Mozi was born in Lu (seen toward the north, with a small coastline along the Yellow Sea) and spent some time as a government minister in Song (a landlocked state to the south of Lu) Mozi was a carpenter and was extremely skilled in creating devices, designing everything from mechanical birds to wheeled, mobile "cloud ladders" used to besiege city walls (see Lu Ban). According to some accounts of the popular understanding of Mozi at the time, he had been hailed by many as the greatest hero to come from Henan. Philosophy[edit] Mozi's moral teachings emphasized self-reflection and authenticity rather than obedience to ritual. Mei, Y.

Alhazen Alhazen is regarded to be the first theoretical physicist and he has been the earliest to discover that a hypothesis has the necessity to be experimented through confirmable procedures or mathematical evidence, hence developing the scientific method 200 years before it was approved by Renaissance scientists.[11] In medieval Europe, he was honored as Ptolemaeus Secundus ("Ptolemy the Second")[12] or simply called "The Physicist".[13] He is also sometimes called al-Basri (Arabic: البصري) after Basra, his birthplace.[14] He spent most of his life close to the court of the Fatimid Caliphate in Cairo and earned his living authoring various treatises and tutoring members of the nobilities.[15] Overview[edit] Biography[edit] Ibn al-Haytham (Alhazen) was born c. 965 in Basra, which was then part of the Buyid emirate,[1] to an Arab family.[16][17] Legacy[edit] Front page of the Opticae Thesaurus, which included the first printed Latin translation of Alhazen's Book of Optics. Book of Optics[edit] G.