A young Swedish woman, old Dutch woman, an Englishman, and an Irishman are riding a train. Very balanced breakfast. This Is Why You’re Wrong « Dump.com. Our advice? Run away. « LOL FB Moments – Funny Facebook Moments. ~Ruffles And Stuff~ I see zombies. NeoN said... yes, yes it does. 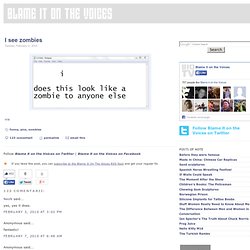 So I thought I’d make a few ornaments to keep in my bag for those awful, awkward moments. I’m sure there are people like that in your life too: the weird cousin, the super smiley coworker. Materials brown or tan wool felt a tiny bit of white felt too some stuffing (polyfil, etc.) red, white, and black embroidery thread white mini rickrack fray check two red buttons glue stick directions 1. cut out template and pin to felt. 2. for the eyes cut two small circles out of the white felt and attach them to the gingerbread man with one black french knot each. 3. cut a rectangle as big as your gingerbread man out of felt. 4. cut off the extra felt. 5. stuff the little man lightly and sew up the opening. 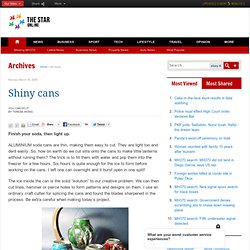 ALUMINIUM soda cans are thin, making them easy to cut. They are light too and dent easily. So, how on earth do we cut slits onto the cans to make little lanterns without ruining them? The trick is to fill them with water and pop them into the freezer for a few hours. Six hours is quite enough for the ice to form before working on the cans. The ice inside the can is the solid “solution” to our creative problem. Sit back and relax: Sip some tea amidst the soothing light of aluminium can lanterns. Lantern and tea light holder From aluminium soda cans You need: 2 aluminium soda cans Wire – 30cm Cutter and small pliers Screwdriver Piercing tool Black marker Dish cloth Basin TealightsMaking the lantern 1. A must read. Way too funny. Error 404 - Not found. n3s7n.jpg (JPEG Image, 550x300 pixels) WIpA1.jpg (JPEG Image, 1024x768 pixels) - Scaled (74. 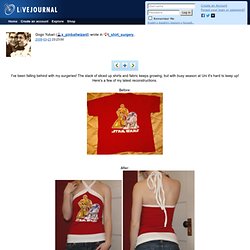 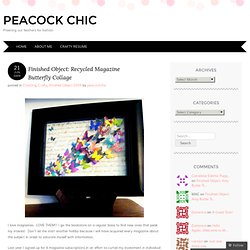 LOVE THEM!! I go the bookstore on a regular basis to find new ones that peak my interest. Don’t let me start another hobby because I will have acquired every magazine about the subject in order to saturate myself with information. Last year I signed up for 4 magazine subscriptions in an effort to curtail my investment in individual magazines and curb my visits to the bookstore. Now, I said I love magazines but I have to admit I HATE magazine subscriptions.

However, when I saw the The Butterfly Project at LollyChop via Craftzine I knew that at least a small part of my magazine collection (read: very small) would find new life via a pretty display of color. I bought the frame from JoAnn’s and my BFF allowed me to use here Martha Stewart punches that she bought from Micheal’s so I did not have to buy a set of my own only to use one time which would have negated the whole reuse effort. The project actually took me a few days to complete. See ya later! Chicken Crap. Daily Dish : Carell&#039;s Daughter Profits From Paparazzi. Ss5.jpg (JPEG Image, 499x516 pixels) Overheard in Athens - Top Rated Quotes. v25OJ.jpg (JPEG Image, 515x614 pixels) - Scaled (88. Model uses large breasts as court defence to prove she didn&#039;t break into house through hole. Last updated at 16:15 04 March 2008 A bikini model has used her large bosom as a defence to win a not guilty verdict in court. 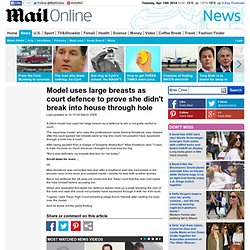 The Japanese model, who uses the professional name Serena Kozakura, was cleared after the court agreed her breasts were so big she could not possibly have squeezed through a hole into a room. After being aquited from a charge of "property destruction" Miss Kozakura said: "I used to hate my body so much because I thought my bust was too big. "But it was definitely my breasts that won for me today. " Scroll down for more ... Miss Kozakura was convicted last year after a boyfriend said she had kicked in the wooden door of his room and crawled inside - beside he was with another woman.

But in her defence the 38-year-old model told the Tokyo court that the man had made the hole himself before accusing her. When she appealed this week her defence lawyer held up a plate showing the size of the hole and said she could not possibly have squeezed through it with her 43in bust. Funny &amp; Stupid Customer Quotes » Hell In A Handbag.