21 Fantastic Movies About Female Friendships. 11 Pieces Inspired by Frida Kahlo - FLARE. But I'm A Nice Guy. Photos: Women and girls who've changed their world. Changing the conversation about sexual assault in the “rape capital of America” Posted by Tom Megginson | 20-04-2013 21:52 | Category: Violence This campaign launched last year, but I just stumbled upon it today when Slutwalk Toronto shared one of the ads from Everyday Feminism‘s Facebook page. 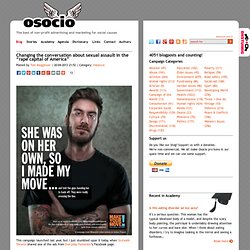 Make Your Move Missoula is “a group of community organizations dedicated to ending sexual violence” in Montana, USA. The positive message of standing up against rape culture is reminiscent of a trend we’ve been tracking by the American Association of University Women, The Association of Chief Police Officers in Scotland, and Sexual Assault Voices of Edmonton. Almost a year ago, Jezebel reported that the city of Missoula the was known as the “rape capital of America” due to an alarming number of sexual assaults at the University of Montana. This campaign is a reaction to that issue. The War on Suffrage. “Nine little Suffergets, Finding boys to hate, One kisses Willie Jones, And then there are Eight.” 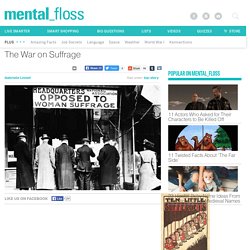 Ten Little Suffergets tells the sad tale of ten little girls who lose their pro-suffrage leanings when they spy shiny objects like toys, men, and the Sandman. The 1915 picture book ends with the final baby suffragette cracking her baby doll’s head open. “And then there were none!” Ends the book on a gleeful note. The suffrage movement, both in America and England, involved angry debates about the ideals of womanhood, the power and purpose of government, and how much beer everyone should be drinking. Suffrage Isn’t Sexy The suffrage movement was part of the larger debate known as “The Woman Question” in Victorian and Edwardian times, when people were discussing what a real woman looked like. In other words, letting women get a chance at the polls would destroy the society. This attitude was reflected in the suffragette caricatures drawn in newspapers and magazines. Babes and Booze. NAILED IT: If You're A Dude On The Internet, You NEED To See This Video. 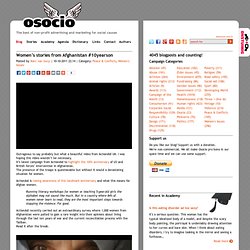 I was hoping this video wouldn’t be necessary. It’s latest campaign from ActionAid to highlight the 10th anniversary of US and British forces’ intervention in Afghanistan. 'Underweight' Models Banned in Israeli Advertisements. Maybe it's because you're "PetiteGal" that you put things in that way, but it's not productive IMO. 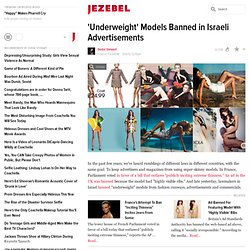 Models are most certainly NOT "too tall" or "too tall for their size" because that frames the discussion as though their height is the problem and/or a correctable condition. It's not. Height is 99% genetics and saying someone is "too tall" will only give tall girls a complex they can't do a damn thing about. The actual problem is that the girls on the runway/in editorials are encouraged to take measures to be a weight that is *unnatural* and *unsustainable long-term* proportionate to their natural, non-negotiable height. So if the industry were required to use average-height girls at the moment, they'd just encourage them to diet to a waist size equivalent to a 10-year old to get "that look".

Because at a certain point the upper shelf on height will get reached. Height *IS* a problem if you're going to correlate proportion. Video of 500 Years of Female Portraits in Western Art. 11 Photos Celebrating Women Workers of World War I. While you’ve probably seen hundreds of images of women working in factories during World War II, that wasn’t the first time women joined the workforce to help fill in for the millions of men sent out to fight. 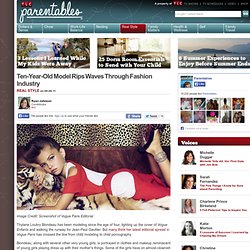 But many think her latest editorial spread in Vogue Paris has crossed the line from child modeling to child pornography. Blondeau, along with several other very young girls, is portrayed in clothes and makeup reminiscent of young girls playing dress up with their mother's things. Some of the girls have on almost-clownish makeup, while others are seemingly fresh-faced and natural.