Worse than Ever Imagined: True Scale of the Holocaust Revealed as it's Discovered Nazis created 42,500 camps and ghettos to Persecute Jews - Not 7,000 as Previously Thought. It is one of the worst moments in history, which still horrifies to this day. 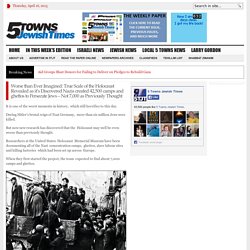 During Hitler’s brutal reign of Nazi Germany, more than six million Jews were killed. But now new research has discovered that the Holocaust may well be even worse than previously thought. Researchers at the United States Holocaust Memorial Museum have been documenting all of the Nazi concentration camps, ghettos, slave labour sites and killing factories which had been set up across Europe. Jewish Response to the Mass Murder - Vilna During the Holocaust - The Jerusalem of Lithuania: The Story of the Jewish Community of Vilna. Responses to the Mass Murder and Rescue Efforts A Jew climbing out of a melina (hiding place) at 6 Strashun Street in Vilna Jewish forced laborers. 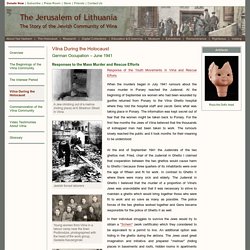 Gulag: Soviet Forced Labor Camps and the Struggle for Freedom. Work in the Gulag GULAG was the acronym for the Main Administration of Corrective Labor Camps. 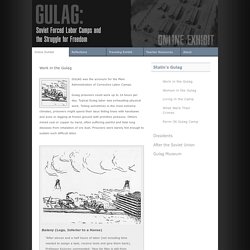 Gulag prisoners could work up to 14 hours per day. Typical Gulag labor was exhausting physical work. Toiling sometimes in the most extreme climates, prisoners might spend their days felling trees with handsaws and axes or digging at frozen ground with primitive pickaxes. Others mined coal or copper by hand, often suffering painful and fatal lung diseases from inhalation of ore dust. Balany (Logs, Inferior to a Horse) “After eleven and a half hours of labor (not including time needed to assign a task, receive tools and give them back), Professor Kozyrev commented: ‘How far Man is still from perfection. Drawing and memoir excerpt by Jacques Rossi. Courtesy of Regina Gorzkowski-Rossi. Treblinka extermination camp. The second camp, Treblinka II, was designed purely for extermination. 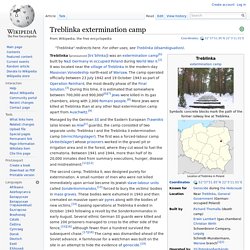 A small number of men who were not killed immediately upon arrival became its Jewish slave-labour units called Sonderkommandos,[13] forced to bury the victims' bodies in mass graves. These bodies were exhumed in 1943 and then cremated on massive open-air pyres along with the bodies of new victims. Gassing operations at Treblinka II ended in October 1943 following a revolt by the Sonderkommandos in early August. Several ethnic German SS guards were killed and some 200 prisoners managed to cross to the other side of the fence,[16] although fewer than a hundred survived the subsequent chase.[17][18] The camp was dismantled ahead of the Soviet advance. A farmhouse for a watchman was built on the site in an attempt to hide the evidence of genocide. Background[edit] HISTORY IN IMAGES: Pictures Of War, History , WW2: Poland Under German Occupation And Warsaw Ghetto (LARGE IMAGES) "Stunning . . . 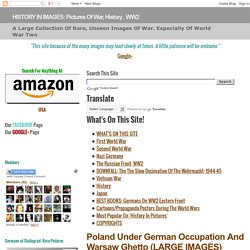 Filled with unforgettable incidents, images, and people. "— "Remarkable . . . a document of lasting historical and human value. " Deportations to and from the Warsaw Ghetto. DEPORTATIONS TO THE WARSAW GHETTO Between January and March 1941, Jews from smaller communities to the west of Warsaw were deported to the Warsaw ghetto. 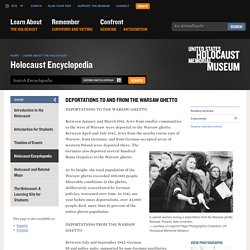 Between April and July 1942, Jews from the nearby towns east of Warsaw, from Germany, and from German-occupied areas of western Poland were deported there. The Germans also deported several hundred Roma (Gypsies) to the Warsaw ghetto. At its height, the total population of the Warsaw ghetto exceeded 400,000 people. Miserable conditions in the ghetto, deliberately exacerbated by German policies, worsened over time.

In 1941, one year before mass deportations, over 43,000 people died, more than 10 percent of the entire ghetto population. Search for "medicine" - Celiac Disease Foundation. Starvation. CHILDREN’S DEATH TOLLS: NOT AN EASY NUMBER TO FIND. 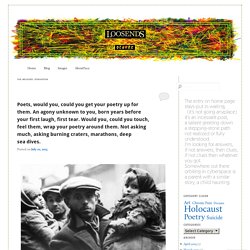 ASSUME THAT IF A POPULATION IS TORN ASUNDER BY WAR AND ITS INDIVIDUALS ARE COUNTED AMONG THE DEAD, CHILDREN EITHER ORPHANED, STARVED OR MURDERED ARE A SIGNIFICANT NUMBER OF THAT COUNT, POSSIBLY 20 to 30% Darfur Death Toll: from 100,000 – to 400,000.The Death Toll in Darfur, by Nicholas Kristof, New York Times Palestinian Death Toll: 6,473. (Dec 2000 to April 2010) Iraq War Death Toll: 1.1 million. Holocaust Death Toll: Six million Jews murdered; out of that number 1.5 million Jewish children murdered, 100,000 or more Gypsy children murdered, thousands of handicapped children murdered. Ghettos. A guide to the history and sights of the former ghetto in Podgórze - In Your Pocket city guide - essential travel guides to cities in Poland. Main entrance gate to the Kraków Ghetto from Rynek Podgórski Kraków has always been regarded as the cultural centre of Poland, and before World War II it was likewise an important cultural centre for approximately 65,000 Jews – one quarter of the city’s total population – who enjoyed the city’s relatively tolerant climate. 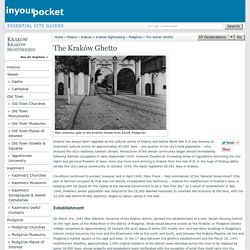 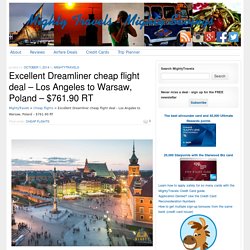 The Boeing 787 Dreamliner has more oxygen than other planes, so you leave feeling more rested than usual. The high-spec mood lighting system helps keep your body clock in tune, there's a view of the horizon no matter where you're sitting and you can dim the larger-than-average windows at the touch of a button. This great cheap flight deal costs just 6 cents per mile for 3 nights between the 23rd and 26th November, flying with Norwegian from Los Angeles. You need to change in London both ways. Holocaust Survivors Describe the Last Months in the Warsaw Ghetto – Voices from the Inferno.