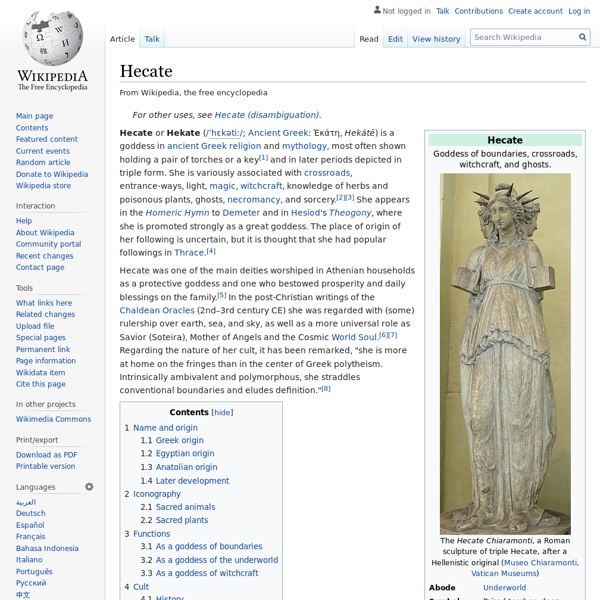 Name[edit] The etymology of the name Hecate (Ἑκάτη, Hekátē) is not known . Suggested derivations include: From the Greek word for 'will'.[8]From Ἑκατός Hekatos, an obscure epithet of Apollo.[9] This has been translated as "she that operates from afar", "she that removes or drives off",[10] "the far reaching one" or "the far-darter".[11]the name of the Egyptian goddess of childbirth, Heqet, has been compared.[12] In Early Modern English, the name was also pronounced disyllabic and sometimes spelled Hecat. It remained common practice in English to pronounce her name in two syllables, even when spelled with final e, well into the 19th century. The spelling Hecat is due to Arthur Golding's 1567 translation of Ovid's Metamorphoses,[13] and this spelling without the final E later appears in plays of the Elizabethan-Jacobean period.[14] Noah Webster in 1866 particularly credits the influence of Shakespeare for the then-predominant disyllabic pronunciation of the name.[15] Representations[edit]

Statue of Liberty as ISIS Statue of LibertySymbols [Mithras. Greek Hecate, Egyptian Isis, Babylonian God Ishtar and Semiramis, wife of Nimrod, with Light/flame.] Talisman by Graham Hancock and Robert Bauval shows this goddess is actually the Egyptian Isis Helios, Greek god of the sun. The False prophet Revealed - Nibiru Palace part 14 François Rabelais - original Monk of Thelema - guess where he lived - Lyons, France François Rabelais (/ˌræbəˈleɪ/;[1] French: [fʁɑ̃.swa ʁa.blɛ]; between 1483 and 1494 – 9 April 1553) was a French Renaissance writer, humanist, physician, Renaissance humanist, monk and Greek scholar. He has historically been regarded as a writer of fantasy, satire, the grotesque, bawdy jokes and songs. His best known work is Gargantua and Pantagruel. Ishtar Ishtar (English pronunciation /ˈɪʃtɑːr/; Transliteration: DIŠTAR; Akkadian: 𒀭𒈹 ; Sumerian 𒀭𒌋𒁯) is the East Semitic Akkadian, Assyrian and Babylonian goddess of fertility, love, war, and sex.[1] She is the counterpart to the Sumerian Inanna, and is the cognate for the Northwest Semitic Aramean goddess Astarte. Characteristics[edit]

Dark Moon I am the dark Goddess, I am Hecate I am the Darkness behind and Beneath the Shadows I am the absence of air that waits at the bottom of every breath I am the Ending before Life begins again. Maiden, Mother, Crone…I am all these and more. Whenever you have need of anything call upon me. I am here…for I abide within you all Even at the darkest of times When there seems no single spark to warm you And the night seems darkest of all, I am here… Watching and waiting to grow within you In strength and in love. Come to me and see that which cannot be seen, Face the terror that is yours alone. Swim to me through the blackest oceans To the center of your greatest fears– The Dark God and I will keep you safe.

Hecate, Greek Goddess of The Crossroads Hecate, Greek goddess of the three paths, guardian of the household, protector of everything newly born, and the goddess of witchcraft -- once a widely revered and influential goddess, the reputation of Hecate has been tarnished over the centuries. In current times, she is usually depicted as a "hag" or old witch stirring the cauldron. But nothing could be further from the image of Hecate's original glory. Statue of Liberty - Masonic Goddess The Statue of Liberty — A Masonic Goddess from Top to Bottom The Babylonian Ishtar, Imperial Rome’s goddess Libertas was Papal Rome’s “MOTHER OF THE HARLOTS AND ABOMINATIONS OF THE EARTH” and the template for America’s Statue of Liberty. One of the many proofs of Freemasonry’s cult of liberty, and furthermore of its deep influence upon our culture and mentality, is the Statue of Liberty. This colossus in New York’s harbor was conceived by Freemasons, financed by Freemasons, built by Freemasons, and installed by Freemasons in a Freemasonic ceremony. The poem about “the huddled masses” inscribed on its base was written by American Jewess, Emma Lazarus. The maker of the statue was Freemason Frederic-Auguste Bartholdi.

MM is the motherload - the rite absorbs everything, Catharism, Rosicurcianism, Gnosticism, Alchemy, Kabbalah, It is not to confuse these two words when talking about Egyptian Masonry. It would be like mixing dogma founder of a religion with the conduct of one of its religious services. The Rite It is the global body of an immemorial transmission, still current and purposeless. It is the result of the Route of humanity, especially in the case of Oriental Rite of Misraim, a road marked by all the great initiates who, since the dawn of time, remind us of the Primordial Tradition. For thousands of years (some symbolically speak of millions of years...), Transmitters and watchmen, the "cherchants" priests and architects, philosophers pharaohs and transmit the deposit they received.

Kāla (time) Head of Kala carved on top of Kidal temple portal, East Java. Kālá (Sanskrit: काल, IPA: [kɑːˈlə]) is a Sanskrit word which means "Time".[1] It is also the name of a deity in which sense it is not always distinguishable from kāla meaning "black". It often used as one of the various names or forms of Yama. Monier-Williams's widely used Sanskrit-English dictionary[2] lists two distinct words with the form kāla. kāla 1 means "black, of a dark colour, dark-blue ..." and has a feminine form ending in ī – kālī – as mentioned in Pāṇini 4-1, 42.kāla 2 means "a fixed or right point of time, a space of time, time ... destiny, fate ... death" and has a feminine form (found at the end of compounds) ending in ā, as mentioned in the ṛgveda Prātiśākhya. As a traditional Hindu unit of time, one kālá corresponds to 144 seconds.

Journeying to the Goddess “Lakshmi’s themes are devotion, luck, wealth, relationships, prosperity, love, the harvest and autumn. Her symbols are a lotus, rice, coins and basil. A favorite Goddess in the Hindu pantheon, Lakshmi brings devoted love into our lives, along with a little luck and extra pocket change to help things along. When called upon, Lakshmi opens the floodgates of heaven to meet our heart’s or budget’s needs. The annual Lakshmi Puja festival celebrates Lakshmi and honors Her ongoing goodness, which manifests in an abundant autumn harvest. If you are a merchant or store owner, it’s customary to appeal to Lakshmi today for the ongoing success of your business.

The Goddess Hecate The Goddess Hecate is a triple Goddess in that She rules the Heavens, Earth and the Underworld. During the times of Hecate, there really was no such thing as a Crone. Dark Goddess yes. Columbia "Columbia" (/kəˈlʌmbiə/; kə-LUM-bee-ə) is a historical and poetic name used for the United States of America and also as one of the names of its female personification. It has given rise to the names of many persons, places, objects, institutions, and companies; e.g., Columbia University, the District of Columbia (the national capital), and the ship Columbia Rediviva, which would give its name to the Columbia River. Images of the Statue of Liberty largely displaced Columbia as the female symbol of the U.S. by around 1920.[1] Columbia is a New Latin toponym, in use since the 1730s for the Thirteen Colonies. It originated from the name of Christopher Columbus and from the ending -ia, common in Latin names of countries (paralleling Britannia, Gallia etc.). A defiant Columbia in an 1871 Thomas Nast cartoon, shown protecting a defenseless Chinese man from an angry Irish lynch mob that has just burned down an orphanage.

Ancient Mystical Order Rosae Crucis - Wikipedia Official Worldwide Emblem of the Rosicrucian Order A Rosicrucian Master's Cross, from the AMORC Rosicrucian Library in San Jose The Ancient and Mystical Order Rosæ Crucis (AMORC), also calling itself the Rosicrucian Order, is currently the largest Rosicrucian organization in the world. It has various lodges, chapters and other affiliated bodies throughout the globe, operating in 19 different languages. Ori (Yoruba) Ori is a metaphysical concept important to Yoruba spirituality and philosophy. Ori, literally meaning "head," refers to one's spiritual intuition and destiny. It is the reflective spark of human consciousness embedded into the human essence, and therefore is often personified as an Orisha in its own right . In Yoruba tradition, it is believed that human beings are able to heal themselves both spiritually and physically by working with the Orishas to achieve a balanced character, or iwa-pele. When one has a balanced character, one obtains an alignment with one's Ori or divine self. Fagbemijo Amosun Fakayode.