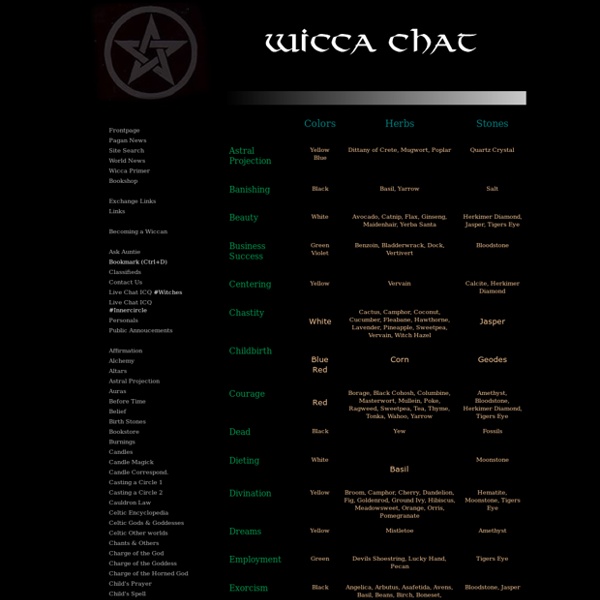 Casting a Circle The Purposes of a Circle A sacred circle has several purposes, the most significant of which is to define an area where formal ritual work can be performed. A circle is a place in which the rules and conditions are different to that of the everyday world. A circle is not a barrier, but a doorway to another world. To contain any magickal energy raised and to prevent its dissipation until it has been used up is another purpose of the circle. 1. 2. 3. 4. 5. 6. 7. This completes the casting of your circle. How to Close a Circle Go to the North, hold up your blade, and say, “Guardians and spirits of the North wind, my ritual is now complete. Extinguish your altar candles and bow your head at the altar, saying, “I declare this scared circle closed. What is Thou looking for?

The Dance at Alder Cove: Circle Casting and Sacred Space Written and... The Morrigan, Celtic Goddess of War - WHEN THE GODDESS CALLED MY NAME This Chapter is dedicated to my very dear friend, Morgan. She has been known by many names throughout Ireland, Britain and Wales, such as Morrigu, Morgain, Morgan and The Morrigan. She has also been given many titles, including the Lady of the Lake and the Goddess of Water and Magick. They have called her the Phantom Queen, the Goddess of War, Fate and Death and the Goddess of Battle, Strife, and Fertility, as well as a Moon Goddess, the Queen of the Fairies, the Goddess of Rivers, Lakes and Fresh Water, and the Patroness of Priestesses and Witches. The Morrigan has been associated with many things, including revenge, the night, magick and prophecy, and she has also, on occasion, been associated with female energy, and with the immense strength with which it can come bursting forth. The Morrigan was a shape-shifter, who would usually take on the form of a raven or a crow. In true Celtic tradition, The Morrigan has appeared in a variety of Triple Goddess trinities.

The Magical Herbalist’s Mini Guide to Popular Herbs, Plants, Fruits, Flowers & Their Magical Properties… | The Magickal Herbalist The herbs listed below that are marked with a * next to it, should never be consumed without the correct & legal amount made & distributed by that of a qualified herbalist. They are extremely dangerous herbs, especially when used incorrectly… Let us start the list of most popular herbs alphabetically: Absinthium *A healing herb that promotes good health, vigour & an active agent to fight off disease. Acorn *Promotes good luck, encourages fertility, spiritual growth & prosperity. Acacia *Promotes success, monetary gain, lasting love & helps develop your psychic powers. African Violet *A herb that is known for its protection, healing & spiritual growth. Amber *Helps promote happiness, friendship, comfort & reassurance. AgrimonyEncourages protection, helps remove & cleanse away negative energy & hexes. Aletris Root *Commonly used as a magical & herbal correspondence in ‘female magic’, for protection & prosperity. AlmondWisdom & success. Aloe *(The pure form which Aloe Vera is created).

Is There A Hidden Hallucinogenic Pharmacology Behind ‘Witches Brew’ and Broomsticks? While watching one of my favorite Halloween movies last night, Hocus Pocus, I suddenly began wondering why witches are always portrayed riding broomsticks. My research led me to the strangest and most unexpected theory: That broomsticks are related to bread, specifically rye bread, and the hallucinogenic fungus that grows on it called Ergot. During the Middle Ages and the Renaissance, much of bread made in Europe was made with rye. The fungus ergot that grows on rye bread can be lethal in high doses, and yet in lower doses it can produce vivid hallucinations and was thought to be responsible for the ‘dancing mania‘ reported through Europe from the 14th to 17th centuries, where people danced in the streets speaking gibberish and foaming at the mouth until they eventually passed out. So what does this have to do with broomsticks? And what were the most effective mucous membranes for absorbing these psychedelic ointments? So, these crafty day trippers (or maybe night trippers?) Dr.

Alchemy Works Oils, Incense, Herbs and Seeds for Magic Tips & Ideas To Make Better & More Interesting Powers Whether for creating a superhero or supervillain OC or developing an original supernatural creature, coming up with and balancing out powers can be a pain. So, here are some pointers and ideas to take you through the whole power creation and development process. First rule of power-having: DON’T BE A MUNCHKIN. For the uninitiated, the term “munchkin” refers to a type of roleplayer who treats the game like a competitive sport. If you’re trying to come up with powers based solely on how unstoppable, awesome, or badass they’ll make your character, stop. Will it be interesting to watch the character use those powers? In fiction, characters who are so powerful that they can do pretty much whatever they want quickly grow boring. In a roleplay, if your character’s powers allow xir to solve pretty much every problem that comes up, the other players will be left with almost nothing for their characters to do, which means there’s no reason for them to keep roleplaying (especially with you).

Morrigan by Honor Johnson This article is about the Goddess Morrigan, whom archaeological evidence now tells us, dates back beyond the Copper age, and was the dominant Goddess of Europe called the Great Goddess. When I read the material about Morrigan, I suspected that there was more to her story, and that she was a transporter between life and death; a birth Goddess and a death Goddess in that she moved the soul through these cycles. Later writing seems to concentrate on her connection to death, but comes to view her, as warrior societies often do, in a way connected to their own needs (power, energy, enchantment and warfare). Stone stelae with sculpted breasts have been discovered at Castelucio de Sauri, some with only breasts and a necklace as a marker. In Newgrange, Ireland, is her grand megalithic tomb-shrine. Some writers claim that she did not have a consort, others that her consort was the horned god. -from Bruiden Da Choca. -Annals of Leinster Ireland sober is Ireland stiff.

The Hedge Wife: Magical Herbalism Part 1 Witchcraft and herbalism go hand in hand and have done so for centuries. In the past, witches were called wise women or wise men and were often the only people their neighbors could go to for healing. Doctors were sparse and so expensive only gentry could afford them or...there were none to be found in general. So the wise men and women who watched the stars, gave thanks to the divine and harvested and respected the herbs of the field were the healers of mankind until their persecution led them to go underground and hide their craft and wisdom. Today, many witches are returning to their roots so to speak and looking to find a connection to the earth by healing themselves and those around them with herbs and plants. I wanted to do a series of posts to collect data online into one place for easier research not only for myself but for others looking. The following are site and blogs that provide magical herbal information. I hope you find many blessings in the links given.